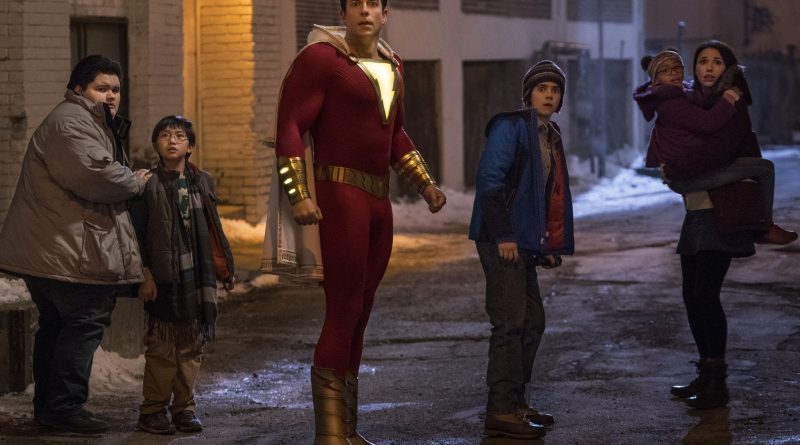 But the tone of “Shazam” frequently shifts from a lighthearted reimagining of 1988’s “Big” as a superhero romp into a sad and scary plunge into the depths of human failings faster than you can shout a battle cry.

In the movie version of the long-running comic created by artist C.C. Beck and writer Bill Parker, Billy is a streetwise 14-year-old foster kid who has a habit of running away as he tries to track down the mother from whom he was separated as a toddler. He finally is sent to a cozy group home run by grown-up foster kids Rosa and Victor Vasquez (Marta Milans and Cooper Andrews), where his roommate is the friendly superhero enthusiast Freddy Freeman (Jack Dylan Grazer). Despite his attempts to hold his new foster family at arm’s length, Billy defends Freddy, who has a disability, from a couple of bullies at school and is magically transported to the lair of the dying Wizard Shazam (Djimon Hounsou), the last of a council of seven sorcerers tasked with keeping the Seven Deadly Sins contained.

The wizard commands that Billy seize his magical staff, say his name, and, “Shazam,” the teen is transformed into a superpowered adult. He turns to Freddy to help him navigate his newly acquired powers and sets out to use them as most adolescent boys would: to buy beer, visit a strip club and charge people for selfies, until, naturally, he takes the fun too far and endangers innocent people with his high-flying, super-strength shenanigans.

Billy has barely mastered his newfound “bullet immunity” when he is confronted by his formidable nemesis: Dr. Thaddeus Sivana (Mark Strong), a physicist who was rejected as a child by The Wizard Shazam as unworthy but as an adult has found a way to harness and command the Seven Deadly Sins – and now he wants Shazam’s powers, too.

It may be another superhero origin story, but “Shazam” also is an irreverently uproarious showcase for the charming Levi, whom I’ve adored since he starred in the spy-comedy series “Chuck,” with an intimidating antagonist in Strong – who has made his career playing just this type of character in “Sherlock Holmes,” “Stardust,” “Kick-Ass” and more – and an entertaining and heartwarming final act. Stretches of the film practically buzz with boundless joy and energy.

Although it’s clearly crafted as a colorful and jokey countermeasure to dark and brooding DC movies like “Batman v Superman” – it’s set in a world where these superheroes are accepted as real and actively operating – “Shazam” also boasts some of the darkest material I’ve seen in a PG-13-rated comic-book movie. As a child, Thad Sivana (Ethan Pugiotto) is disdained and abused by his business mogul father (John Glover), bullied by his older brother and rejected by The Wizard Shazam, who it seems summoned and discarded many youngsters over the decades before settling on Billy because he basically had no choice.

Add to that the foster kid protagonist whose missing mother has never bothered to look for him, and screenwriters Henry Gayden (“Earth to Echo”) and Darren Lemke (“Goosebumps”) tromp pretty blithely into childhood trauma territory without much clear vision except relating a vague moral about family not being limited to blood ties. (There’s a message that could be conveyed about people rising to the occasion when they are told they are worthy of wielding great power, but these writers opt for an approach too ham-fisted for that sort of nuance.)

It doesn’t help that David F. Sandberg (“Annabelle: Creation”) sometimes forgets he isn’t helming a horror movie this time. His Seven Deadly Sins manage to appear both low-budget and terrifying, with a few kids in the audience (including my 8-year-old daughter Brenna, who is a seasoned comic-book moviegoer) screaming and crying – and quite a few adults recoiling in shock – as the shadowy specters rampaged through a boardroom gobbling the heads off of executives.

The mid-credits sequence (there’s a stinger at the end of the credits, too, which seems to have become enshrined comic-book movie tradition at this point) sets up the sort of strange and silly sequel possibilities you might expect from a superhero named Shazam. Despite the unevenness of his cinematic introduction, I’m willing to go on another adventure as long as Levi is the guy in the cherry-red lightning-bolt suit.