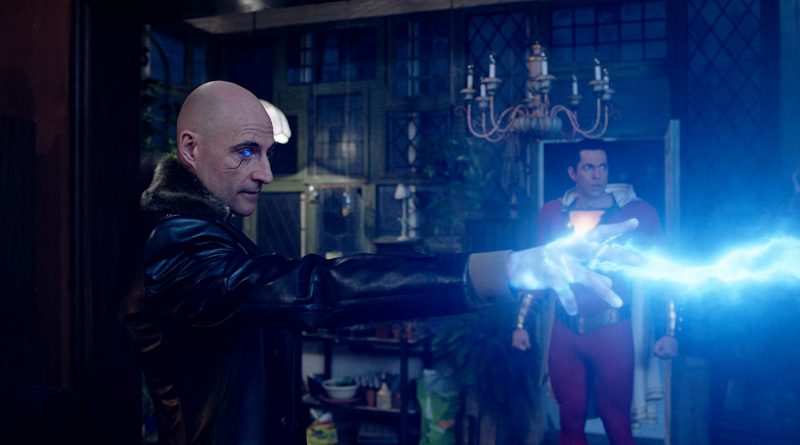 Now that the multiplexes are inundated with superhero movies, some are bound to be mediocre – and this cinematic adaptation of the DC comic is not great or even good.

Orphaned 14 year-old Billy Batson (Asher Angel) is always searching for the single mother from whom he was separated at a Philadelphia Winter Carnival. Billy has a pure’ish heart which, seemingly, qualifies him to inherit the powers of the Wizard Shazam (Djimon Hounsou), who protects the world from the Seven Deadly Sins.

Utilizing the iconic archetype of a childhood dream – a.k.a. saying a magic word and suddenly transforming into a superhero – Billy becomes a costumed, caped, muscle-bound man (Zachary Levi).

Billy’s newfound power arouses the envy of evil Dr. Thaddeus Sivana (Mark Strong), who was always disparaged by his dad (John Glover) and subsequently rejected by the Wizard.

Problem is: in Billy’s basic ‘identity’ story, screenwriter Henry Gayden and director David F. Sandberg never bothered to coordinate movements and gestures that young Billy might share with his older counterpart, so the two actors – Asher Angel and Zachary Levi – don’t seem to be playing the same character.

And the storyboarding sometimes gets confusing, particularly the conclusion when all the foster kids are suddenly replaced by adults whom we’ve never seen before and probably won’t in the near future.

FYI: While Marvel Comics has trademarked the name of Captain Marvel, casting Bre Larson as the newest Avenger, DC’s original Captain Marvel, dressed in a costume featuring a yellow lightning bolt, dates back to 1939 Whiz Comics and was modeled after actor Fred MacMurray.

On the Granger Movie Gauge of 1 to 10, Shazam! is a silly 6, an irreverent, ebullient escapade