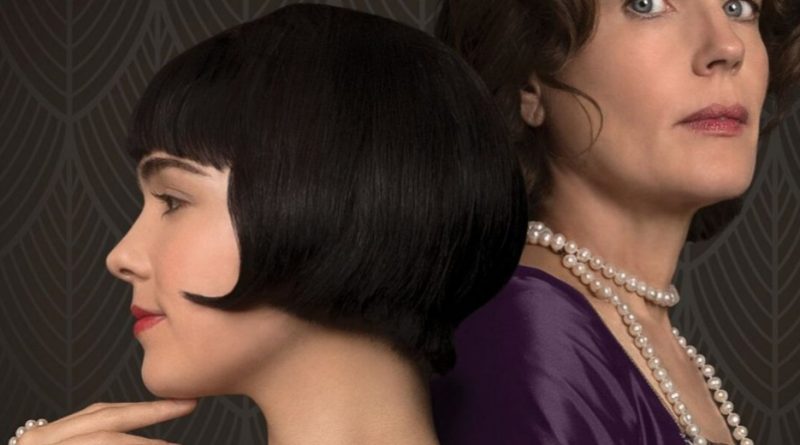 The Chaperone profiles Louis Brooks’ chaperone during the early 1920s.

In 1922 fifteen-year-old Louise Brooks travels from Wichita, Kansas, to New York with chaperone Norma Carlisle. Opening titles announce that within a few years Brooks “will become one of the most famous film stars in the world.” Director Michael Engel’s The Chaperone announces its focus on Norma as opposed to Louise, but the contrasts between these two drive the film.

Louise has a free-spirited, vivacious personality, quite different from Norma’s straight-laced lifestyle and conservative values. Norma’s interaction with Louise and her experiences in New York will prompt reexamination of her life in Wichita, especially given her troubled marriage. A diversity of experiences in Manhattan illuminate significant choices of the teenager and of the middle-aged woman as both explore their identities, with freedoms embraced by Louise and resisted by Norma.

Though the story takes place in the 1920s with a brief jump to the early 1940s, the issues remain remarkably relevant today: how comfortably do we adjust to changing morés, and should we make the effort? How much leeway should be granted to social conventions? And how does knowledge of parents matter, since Norma was adopted and yearns to uncover her actual identity.

Based on Laura Moriarty’s 2012 novel of the same title, The Chaperone shows its pedigree; that is, Julian Fellowes wrote the screenplay, Michael Engler directed, roles they perfected for the Downton Abbey series, and Elizabeth McGovern, Lady Cora there, stars as chaperone Norma. That combination adds a sense of Masterpiece Theatre stylistic familiarity. It also feels a bit too pat and predictable in its melodramatic unfolding, especially the interjected flashbacks. And the metaphor of Norma’s wearing and then jettisoning her corset is too heavy handed.

By contrast, Louise’s involvement with the Dennishawn Dance Company, which she did join, adds several animated scenes. As Louise, Haley Lu Richardson brings a welcome jolt of joie-de-vivre to her character, not an easy achievement given Brooks’ fame. In addition, the clothes and art direction beautifully capture the time period, one often thought of as simpler but nicely revealed here to have its own challenges.