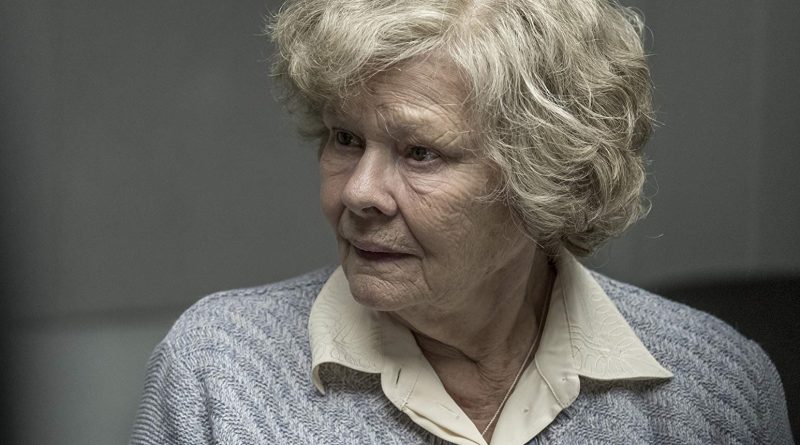 Based on the sensational real-life story about elderly widow Melita Norwood, who was arrested for being one of W.W.II’s top spies, this turns out to be a tepid tale that’s totally lacking in suspense.

Given the fictional name of Joan Stanley (Judi Dench), she lives in a small village, quietly spending her days painting and tending her garden. Until, one day, MI5 comes to arrest her. According to their files, she was the British physicist who taught the Russians how to build the atomic bomb.

As seen through flashbacks during her interrogation, accompanied by her incredulous son (Ben Miles), Joan recalls the dramatic events that caused her to reveal classified information.

A top physics student at Cambridge University in the late 1930’s, young Joan (Sophie Cookson, who resembles a young Lauren Bacall) was befriended by glamorous Sonya (Czech actress Tereza Srbova), who introduced her to Communist Party meetings. That’s where she met and fell in love with radical Leo (Tom Hughes), a fanatic determined to “rebuild civilization in a totally new way.”

When Joan graduates, she’s welcomed into a secret government laboratory by Prof. Max Davis (Stephen Campbell Moore), who views the Soviet Union as England’s ally. Challenging entrenched sexism, Joan became his assistant and, later, his mistress, since his wife would not agree to a divorce.

When the British government set up a nuclear fission facility in Canada, Joan was part of Prof. Davis’s entourage, only to once again encounter Leo in Montreal. By then, he was working with the KGB.

Insisting, “I’m not a traitor!” idealistic Joan explained, “I wanted everyone to share the same knowledge…because only that way could the horror of another world war be averted. If you look back at history, you’ll see I was right.”

Based on Jennie Rooney’s best-seller, it’s weakly adapted by Lindsay Shapero and blandly directed by Trevor Nunn of the Royal Shakespeare Company.

On the Granger Movie Gauge of 1 to 10, Red Joan is a muted, meandering 5, missing every opportunity to be memorable