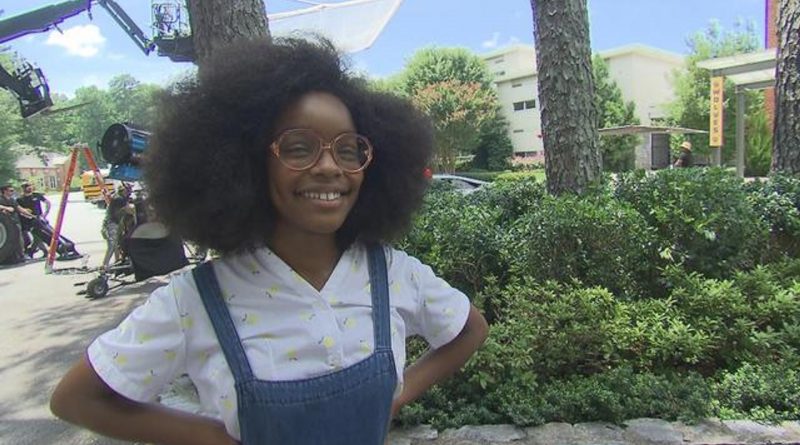 But this is a bit different because it involves a nerdy African-American teenager, Jordan Sanders (Marsai Martin), whose self-confidence is shattered when a Caucasian cheerleader (Eva Carlton) humiliates her at a middle-school talent show.

From that moment on, Jordan is determined to become successful, rich, and mean – because “nobody bullies the boss.”

True to her word, adult Jordan (Regina Hall) is a real bitch, an Atlanta tech CEO who enjoys making life miserable for her assistant April Williams (Issa Rae) and everyone else. Until one day, a little girl wishes Jordan were “little,” so she couldn’t get away with such obnoxious behavior.

Sure enough, when Jordan awakens the next morning, she’s an awkward 13 year-old (Marsai Martin), facing dreaded eighth grade. Gone are her designer clothes, BMW sports car and the ability to unwind at the end of the day with a glass of rose. Her outrageous flirtation with a horrified teacher (Justin Hartley) is one of the memorable moments.

Even with April as her legal guardian, learning the lesson of humility doesn’t come easily to Jordan. Eventually, she concludes: “Everyone thinks you have to grow up to know who you are, but kids already know who we are…The world just beats it out of us.”

Scripted by Tracy Oliver and director Tina Gordon Chism, it’s an allegory about the long term effects of adolescent bullying. As Executive Producer, 14 year-old Marsai Martin came up with the idea, and her confident performance evokes her appeal as Diane Johnson on ABC’s Black-ish.

Yet, it’s a shame that – early on – there’s an unnecessary transphobic joke – when adult Jordan incorrectly calls a neighbor’s young daughter a boy, she then blurts: “Oh, I get it. He’s transitioning!”

On the Granger Movie Gauge of 1 to 10, Little is a formulaic 5 – far too predictable.