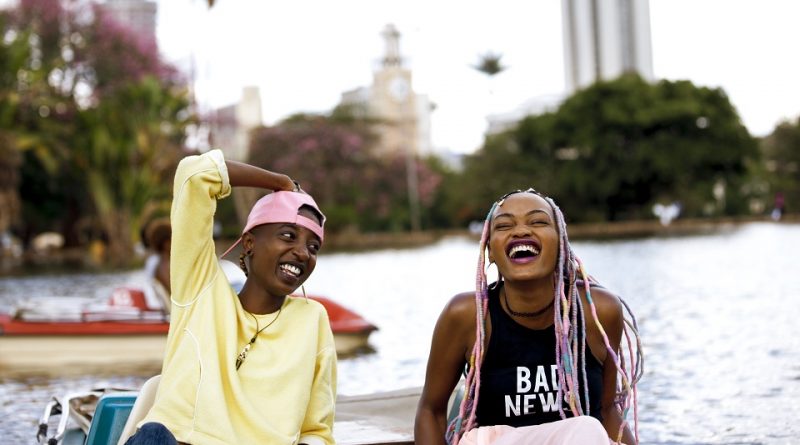 This captivating coming-of-age love story affirms Wanuri Kahiu as a filmmaker to watch.

In 2018, filmmaker Wanuri Kahiu discovered her film Rafiki was going to premiere at Cannes Film Festival, a first for Kenya. Meanwhile, in her own country, where anyone found engaging in same-sex sexual activities can face up to 14 years in prison, the Kenyan Film Board banned Rafiki, for what it said was “legitimizing lesbianism”. A court battle brought by Kahiu, who argued the ban limited her freedom of expression, led to worldwide press attention to the case that eclipsed the film itself.

Ultimately, the Kenyan Supreme Court sided with Kahiu, and the film was granted a one week reprieve. Rafiki played to sold-out audiences for those seven days, outgrossing blockbusters like Black Panther. That represented a victory for open-mindedness and acceptance of LGBTQ people, and a victory for freedom of expression in Kenyan filmmaking.

Now, finally Rafiki is being released in arthouses around the United States, and audiences will have a chance to see Kahiu’s lyrical coming-of-age story for the beautiful, authentic cinematic art it is.

Kena Mwaura (Samantha Mugatsia) spends her time working for her father, John (Jimmy Gathu), and riding her skateboard through her bustling neighborhood in Nairobi. She lives with her mother, a born-again Christian bitter about her breakup with Kena’s dad. John is running for local office, as is the father of Ziki Okemi (Sheila Munyiva), the dramatic-looking head of a clique of girls who, among other pursuits, practice dance routines in the street. It’s clear fairly quickly Kena and Ziki are drawn to each other. It’s also clear they both want to be more than friends. Unfortunately, friends, family, and various busybodies are all completely against their coupling, not only for political reasons, but because of deeply rooted homophobia. Saying the course of young love never runs smoothly is a major understatement when loving someone can mean prison time.

The word rafiki means “friend” in Swahili. Kenyan same-sex couples often have to refer to or introduce their partners as rafiki in public, and to many of their friends and family. One of the best qualities of this film is that the lead characters, while clearly drawn to each other, genuinely want to get to know each other, and to build their love on a foundation of friendship. There is an innocence to their explorations. As written and played by Mugatsia and Munyiva, Kena and Ziki have a curiosity between them that goes beyond magnetism or sexual attraction, and seems to go to their souls. These actors are completely mesmerizing to watch, especially in scenes they do together, which are so believable they will stir up for the audience memories and feelings from their own experiences of falling in love.

Director Wanuri Kahiu is a strong believer in creating art for art’s sake, and to that end, coined the label Afrobubblegum, a term she uses for “fun, fierce, frivolous African art”. Although Rafiki tackles issues of human rights and tolerance, it is at its heart a hopeful love story, anchored in joy. Using a bold palette of colors and a wide array of textures, each scene is filled with a warmth, a visual celebration, which reflects Kahiu’s Afrobubblegum aesthetic. Ziki’s long, pastel braids (which, by the way, are largely bubblegum-colored), juxtaposed against the rich and varied hues which are such a part of Nairobi life in the neighborhood represented, are a feast for the eyes. So too is the interior of Kena and Ziki’s secret meeting place. The director has chosen long, fluid shots and clean edits that enhance the scenes rather than distract from them, yet they all have a distinct point of view. Indeed Kahiu imbues all the experiences Kenu and Ziki share that lead them to falling for each other with a sense of fun, making their challenges all the harder for viewers who have become attached to these characters to watch.

Audiences here in the states will enjoy this tender, memorable movie, and recognize Kahiu as a director of note on the rise. For her colorful, deeply effecting point of view, and her intentional inclusion of female casts and crew members, she is a filmmaker to watch. It would be great to see her at the top of wishlists for future projects by both indie and major studios. For now, I recommend you find out when Rafiki will be playing in your city by clicking here.