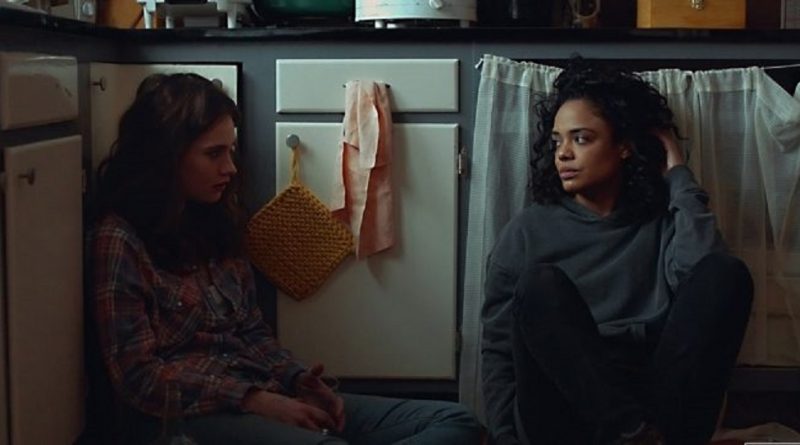 The Western genre has experienced a modern resurgence over the past few years with narratives that pull focus away from the genre’s hypermasculine origins and toward stories that are more individualistic, more character-driven: Chloé Zhao’s The Rider, Emma Tammi’s The Wind, Andrew Haigh’s Lean on Pete. Nia DaCosta’s Little Woods now joins that respectable group, boasting two against-type performances from Tessa Thompson and Lily James and a pointed critique of our modern healthcare system.

DaCosta sets her tale in Little Woods, North Dakota, a small town whose land is increasingly taken over by fracking corporations. The land owners and the banks are getting rich; everyone else is struggling—women especially, who don’t work on the fracking rigs and whose options are mostly the local strip-club or the local diner. In that environment, Ollie (Tessa Thompson) has carved her own path: Although she now strings together odd jobs like doing men’s laundry and delivering them breakfast, for years before she had traversed back and forth over the nearby Canadian border, ferrying drugs to the needy in Little Woods. (And practically everyone is needy in Little Woods.)

But Ollie was caught (“I forgot to be scared,” she explains) and has since spent a long time keeping herself out of trouble and working off her sentence, only for a series of bad things to hit at once. The house she lived in with her dying mother is being repossessed by the bank; they keep leaving foreclosure notices on her door. Ollie is being threatened by the local drug dealer who took over when she stopped, who wants her to start working for him, although she’s out of the trade.

And Ollie’s sister Deb (Lily James), the only family she has left, is in trouble again: Pregnant once more, although she gets no support from her son Bear’s father, and she’s failing to get by although she has a steady waitress job. Everyone in Little Woods is living in the margins, barely keeping their heads above water, and Ollie is desperate to get out. But with so many people pulling at her—and with a deep devotion to Deb holding her in Little Woods—what can be she do for herself?

The Western formula is familiar: one individual, often a man, against nature, against the blank open land, against the forces that attempt to control him. What Little Woods accomplishes is taking those familiar pieces and updating them to not only our current reality—those controlling forces are now primarily banks and businesses, arms of the money-hoarding capitalist machine—but to the characters at the film’s center. Ollie and Deb are women in an environment that doesn’t particularly prize that fact, a small town that doesn’t make room for its women. It takes months to get an OB-GYN appointment. Jobs are few for men, even fewer for women. Rural North Dakota is a harsh place regardless, but Little Woods methodically explores how much harder it is for these sisters, for women attempting to navigate a system that was never set up to benefit them.

DaCosta doesn’t add unnecessary flourishes here; the focus is either Ollie, Deb, or the two together, and the film’s narrative thrust remains on their relationship the whole way through. The sisters fight in a way that suggests those years of shared history, but their loyalty to each other underscores their knowledge that they have no other family but also no desire for anyone else; they either want each other as allies or no one at all. And the criticism of the American healthcare system, so central to this story, is broad but purposeful. The argument doesn’t go much deeper than “People should be able to afford the medicine they need to work and live,” but does it really need to?

Little Woods moves intentionally from scene to scene, not deviating from its main storyline, committed to the problem Ollie and Deb are trying to solve and not budging away from their personal and financial dilemmas. “Your choices are only as good as your options are,” Ollie tells Deb, and Little Woods demonstrates their fierce loyalty to each other in the face of these drastic circumstances. DaCosta, Thompson, and James have created something tense and timely and empathetic in Little Woods, further expanding the Western genre and adding another slice of American life to it.