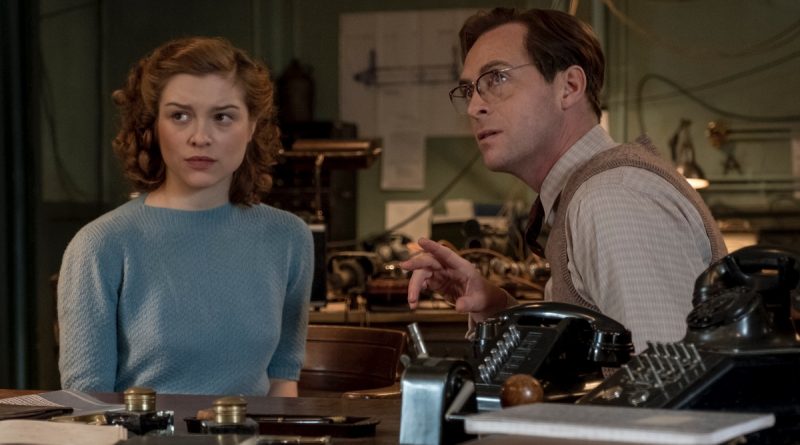 “I thought you were overeducated for a librarian.” Poor Nick (Ben Miles). On discovering that his mother, Joan (Judi Dench) is accused of delivering secrets to the Russians during World War II, he worries that his own experience might be in doubt. “I feel like I don’t know you,” he adds, “Is anything you’ve ever done actually true?”

Nick’s concerns form a kind of emotional nucleus in Red Joan, their narrowness symptomatic of the film’s tedious focus on Joan’s love life. As much as Joan resists the accusations of her son and the MI5 agents who cart her off for questioning at the film’s start, again and again, flashbacks to her younger self (played by Sophie Cookson) make her choices look a little silly.

That’s not to say these choices are inconsequential. Based on the real-life story of Melita Norwood, arrested for being a KGB intelligence source, by way of Jennie Rooney’s 2013 novel, the screenplay by Lindsay Shapero makes clear enough that the “spy granny” upset lots of people. It also makes clear a series of clichés, including Joan’s initial recruitment by a conventionally exotic Communist, Sonya (Tereza Srbova), who enters her Cambridge dorm room window in order to avoid being caught following an escapade with a boy). Her lips red and her swirling cigarette smoke exotic, Sonya’s stories captivate Joan, appearing here as earnest and mundane in curlers and a housecoat.

Taking Sonya as a model, Joan is thrilled to meet her “cousin,” Leo (Tom Hughes), who woos her by insisting that “It was the best of times, it was the worst of times…” is an ode to “Communism.” Joan, being well-read, recognizes this is Dickens, but she’s impressed by his commitment (that, and his pet name for her, “my little comrade”). Their mutual passion is rendered in a discreetly shadowed sex scene, occasioned by Leo’s departure for a new post. Joan moves on as well, taking a position in a secret lab dedicated to developing a super-bomb (the Brits believing the Yanks should not be the only ones to have such a weapon), where her supervisor is another passionate fellow, Dr. Max Davis (Stephen Campbell Moore).

Here the film departs from the real-life story, changing Joan’s position from that of a secretary to the head of the British Non-Ferrous Metals Research Association, to a legit atomic scientist. When Joan suggests they use a centrifuge for an early experiment, her male teammates look surprised until she adds, so demurely, “I studied gasses.” Max is impressed enough that he defends against his colleagues’ assumptions that she’s in place to do laundry or make tea by proclaiming, “She’s a first-class Cambridge graduate with one of the quickest minds in atomic physics.”

No matter. Red Joan reduces Joan’s quick mind to workplace montages (typing, scribbling in notebooks, gazing at blackboards full of equations), her not-so-motivated relationship with Max to a sex scene that looks a lot like the one with Leo, and her realization that the bomb is a bad idea after all to a scene where she watches newsreel coverage of Hiroshima, the black and white screen looming before her, just before the scene cuts to a slow-push-in to her face in her hands. Predictably, this image dissolves to a close-up of Judi Dench’s Joan, whose current-time agony also has to do with explaining herself to a man, which is to say, her son.

The movie’s inclination to reduce Joan’s choices to familiar tropes is embodied by Nick, a lawyer with a particular (institutional and orthodox) investment in what is or can be “true.” When she explains that she wasn’t a Communist, but only hung out with them (“Everyone did it back then, it was the ‘in’ thing”), it’s not clear if she believes what she says or if she’s lying. It’s a problem that by this point, you don’t much care.

Still, Nick pursues what’s true. His (and the MI5 interrogators’) questions set up the film’s melodramatic pattern: carefully composed closeups of Dench’s sad face lead to nicely shot flashbacks where Cookson works through Joan’s serial dilemmas. It’s a pattern that undercuts Red Joan‘s good idea, namely, her resistance to men’s insistence on political and scientific purities, where only one side can be right. It’s a resistance that’s of a piece with Sonya’s observation, “Nobody will suspect us, we’re women.” The film loses sight of that gendered critique, however, as it continues to frame Joan’s political and moral options through the men she loves.