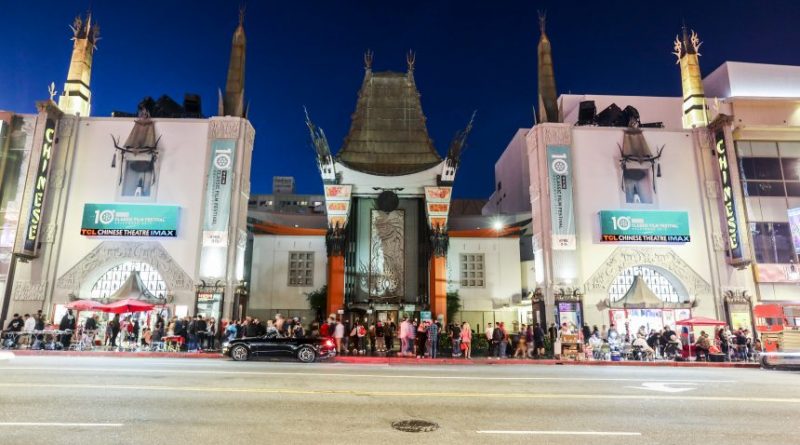 This year’s TCM Classic Film Festival wrapped its 10th annual run with four days of more than 100 movies and events, all screened April 11-14 in the heart of Hollywood, mainly at the historic TCL Chinese complex and Egyptian Theatre.

The classic movie channel’s marathon drew film buffs from around the world to enjoy appearances by actors and filmmakers, world-premiere restorations, tributes (including salutes to 20th Century Fox, filmmaker Nora Ephron and historian-director Kevin Brownlow), and above all, the experience of a shared community. Many screenings and events were programmed around this year’s theme of “Follow Your Heart: Love at the Movies.”

And there was plenty of love displayed for female filmmakers, from the silent era to the present. Here are some of the fest’s most memorable female-focused moments:

WITHOUT LYING DOWN, DOROTHY ARZNER AND MERRILLY WE GO TO HELL (1932):

This pre-Code comedy-drama, starring Fredric March, Sylvia Sidney and in a small supporting role, Cary Grant (“before he was Cary Grant”), was one of several restored films receiving world-premiere screenings at the festival. Dorothy Arzner, who, of course, along with Lois Weber and Alice Guy Blanché, was one of the first female directors in early cinema, directed Merrily as her last project for Paramount. Over her 15-year run in Hollywood, the openly gay Arzner became the only female director to segue successfully to the sound era. 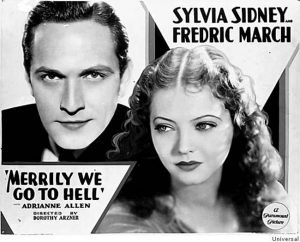 Historian, scholar and filmmaker Cari Beauchamp, who wrote the book on women’s contribution to the nascent movie industry, Without Lying Down: Frances Marion and the Power of Women in Hollywood (1998), introduced Merrily, which drew a sold-out crowd to its 9 a.m. screening. “I’m “so impressed by your dedication to Dorothy Arzner,” Beauchamp said. “She was so comfortable in her skin. She knew who she was and embraced that.”

After toiling as a stenographer for filmmaker William deMille (brother of Cecil) in the early 1920s, Arzner quickly realized that “if you’re going to be in this business, it must be as a director,” Beauchamp said. From there, Arzner moved from scenarist, script girl, film editor and finally, the director’s chair for Fashions for Women (1927). “I like to think that Arzner embodied [film historian] Kevin Brownlow’s famous advice: ‘Never take a no for anything but a maybe’,” Beauchamp said. 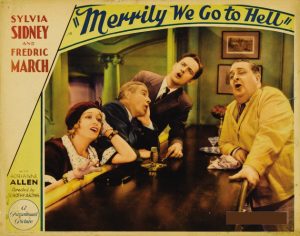 For Merrily We Go to Hell, which touches on alcoholism, dissolution, adultery and open marriage in its short 78-minute running time, “They knew that enforcement of the Code was coming, and so they pulled out all the stops,” Beauchamp said. Arzner started the film without having a finished script, but as usual, Beauchamp noted, “She managed to make something out of nothing.”

LUST IN THE DUST, REVISITED 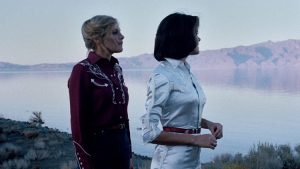 Directed by the openly gay Donna Deitch, Desert Hearts follows the budding romance between an English professor (Helen Shaver), who travels to the West to establish residency for a divorce, and a younger free spirit (Charbonneau) as they battle societal conventions of the ’50s. Deitch, who made her narrative-film debut with this project, said, “Nobody wanted to be in the movie or associated with it because it was so controversial.”

Then just 25 and making her film debut, Charbonneau recalled, “I was told it would be the last movie you’ll ever make.” 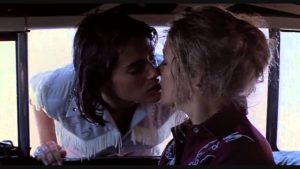 Still, the cast and crew prevailed, and the film has only grown in stature over the years. In 2017, it received a Criterion Collection release. “We hired Robert Elswit before he was Robert Elswit,” said Deitch, referring to the film’s director of photography, who went on to win the best cinematography Oscar for There Will Be Blood (2007). “The look of the film is amazing,” Anders said. “There’s so much space for the actors — it’s so different from how films are shot these days.”

Charbonneau remembered the close rapport on the set: “Helen and I connected right away. There was an enormous amount of intimacy. If you were afraid to go there, it wasn’t going to work. It was such a great collaboration, and it really shows on the screen. Audra [Lindley, who played her stepmother in the movie] taught me so much. She gave me everything to play off of.” 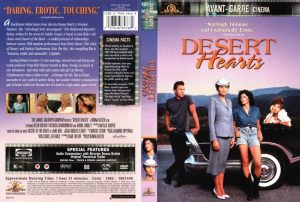 Despite winning early plaudits on the festival circuit, including the Special Jury Prize at Sundance, Desert Hearts was coolly received by the mainstream press. “We got a crushing review from Vincent Canby in the New York Times,” Deitch said. “It was the era when a single critic could kill off your movie.” So to boost her film’s fortunes, Deitch appeared at screenings nationwide to rally audience support. It worked. Shaver received a call from the reclusive Greta Garbo, praising her performance. Deitch added, “We became one of the few Canby-busters of that time.”

The midnight screening of the cult/camp classic Santo vs. the Evil Brain quickly turned into spectacle as two fans in lucha libre garb swarmed the theater, tossing out treats and trinkets, including El Santo masks on sticks. A Mexican folk hero, El Santo was a luchador enmascarado (masked wrestler) and fighter for justice. As portrayed by actor Rodolfo Guzman Huerta, El Santo appeared in more than 50 films, including the first in the series, Santo Contra el Cerebro del Mal (1961, Santo vs. the Evil Brain). 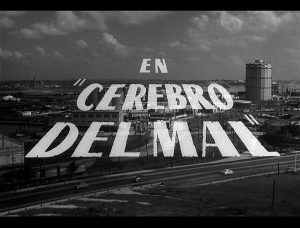 “It’s a miracle that we’re showing this film,” said archivist and director Viviana García Besné, whose grandfather Jorge García Besné introduced El Santo to the screen. As the head of the Permanencia Voluntaria Film Archive in Tepoztlán near Mexico City, García Besné has worked tirelessly to preserve the legacy of the golden age of Mexican cinema, including the films produced by her great-uncles Pedro A. Calderón, José Luis Calderón and Guillermo Calderón, whose accomplishments she chronicled in her documentary Perdida (2009). “The Mexican film industry is not supporting these Santo movies, despite their popularity.” 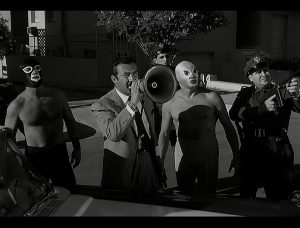 Her father found the original camera negative of Santo vs. the Evil Brain, “so with the centennial of El Santo [Guzman Huerta] in 2017, we thought we should restore his movies.” She implored the audience to revel in the film’s over-the-top spirit: “You must react, or you’ll fall asleep.”

THE PATRIARCHY STRIKES BACK:

Though she was the first female to receive the Directors Guild Fellowship Award and successfully helmed seven films from 1966 to 1974, writer-director-producer Stephanie Rothman found herself on the outs by the late ’70s. Speaking before a midnight screening of her Student Nurses (1970), Rothman recalled that studio chiefs thought she was “too intellectual” — even though she specialized (by necessity) in exploitation fare. 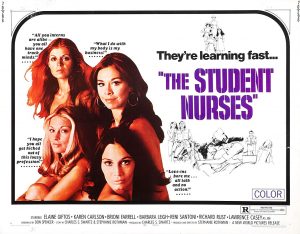 “I dreamed of making small, thoughtful European-style films,” Rothman said. “Then I met Roger Corman and dreamed of small, thoughtful exploitation films.” The dream became reality as Rothman quickly churned out The Student Nurses and four other titles, including The Velvet Vampire (1971), for Corman over the next few years. She embraced the opportunity, especially in Student Nurses, “to talk about sociopolitical issues clothed — or should I say unclothed — in the expectations of the audiences of the time,” Rothman said.

Writing the story for The Student Nurses in a week, Rothman seized on the hospital setting because “the more I thought about it, the more I realized that nurses really run the place,” she said. “So why don’t we see how they seek their own power?” An early line in the movie seems to comment on the experience of women, including Rothman herself, during that era: “There are many things in medicine that are brutal. You’d better get to used to that.” 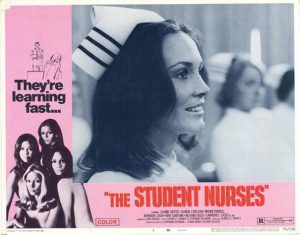 By the late ’70s, Rothman faced her own brutal reality: No one would hire her. Finally, in the early ’80s, one exec finally brought her in for a meeting to discuss a project for a young male director about to make his first studio film. “It sounded just like my own Velvet Vampire [1971],” she recalled. “So I asked them, why not hire me? They didn’t.” The filmmaker and film in question turned out to be Tony Scott and the vampire-themed The Hunger (1983).