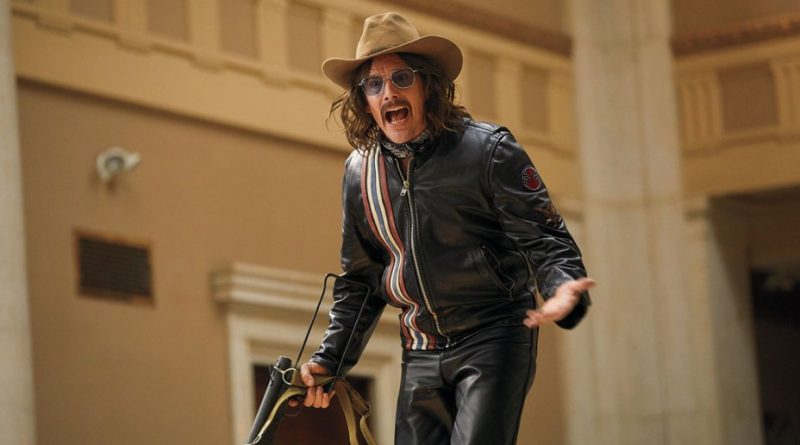 Stockholm Syndrome means that a hostage falls for the person in charge — the thief, the kidnapper, the dictator. Most everyone knows that. But what most everyone does not know is the 1973 incident that insinuated as criminal jargon and concept. The absurdist film Stockholm seeks to educate the unenlightened.

Well, educate and entertain. The entertaining part comes, in part, from the situation itself. It also comes via the interpretation by writer/director Robert Budreau.

The situation: a cocky young man (pardon the redundancy) opens the story with preening. He combs his mustache, he dons his bedraggled wig, he claps on his hat. He’s ready. He plans to rob a bank. His plans are multi-folded, certainly more folded than his smooth brain, for Kaj Hansson — or is he Lars Nystrom? — is also thinking about his brother. He wants to spring his brother out of jail.

So our anti-hero enters the bank, makes threats, orders everyone down. He engages two women, Bianca in particular. She has children, she pleads, as he threatens to kill her. They connect. And so Stockholm Syndrome begins.

Noomi Rapace brings strong skills to her portrayal of Bianca. Ditto, Mark Strong, who plays brother Gunnar with patience. Bea Santos makes a statement as Bianca’s colleague. But it is Ethan Hawke who carries the character of the film. He brandishes, he cajoles, he screws up royally, he suffocates when the vault door is closed, he flirts. All while thinking with his fly. Stockholm should play on a double bill with First Reformed because Hawke defines range.

Robert Budreau, who made Born To Be Blue with Hawke, gives the actor plenty to work with, but he started with the truth of the character, which gives the audience plenty to laugh at. It’s so absurd.