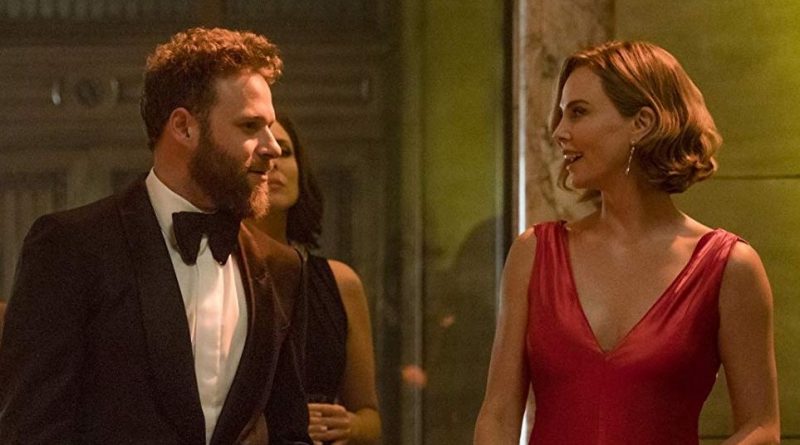 Pairing Seth Rogen’s slouchy dresser, Fred Flarsky, an unapologetic, gonzo journalist with Charlize Theron’s glamorous, Charlotte Field, a driven successful Secretary of State who has her sites on running for President is opportune—as the ‘oil and water’ pair make one of the most remarkable couples since the unlikely pairing of Julia Roberts and Hugh Grant in the highly successful film Notting Hill. (1999).

Set against the backdrop of a political arena, Long Shot is a hysterical yet sometimes raunchy comedy that effectively deals with serious topics, such as your ‘appropriate’ life partner for a high profile position and serious world societal issues. Praise for writers Dan Sterling (The Interview 2014) and Liz Hannah (The Post 2017) as the sharp script’s disillusioned journalist, Fred Flarsky’s character rocks the boat, in Charlotte Field’s ambitious, career driven rise to the top. What’s even more noteworthy are the heightened acting proficiencies of Rogen and Theron, as the mixture of comedy and drama creates an engaging while fascinating dichotomy—one that grows stronger as the film progresses.

Director Jonathan Levine (Snatched 2017), doesn’t stay still in Washington D. C. and New York as a setting, we are jetted around the world to France, Sweden, Argentina, Japan and the Philippines to view the world social issues up close and personal, and to create realism in Field’s Secretary of State global character. We are the benefactors as each country, piles on rich layers to an already charming story.

In an opening scene, the uproariously funny Better Call Saul’s Bob Odenkirk portrays the pathetic President of the USA, as he confides in Charlotte his plan to cross over from TV to movies—she can barely contain her composure. He seriously tells her, “This is a big step and I’ll need to devote many hours, of which I won’t have the time to fulfill my job here in the Oval Office.” Please note, these are not exact quotes, although I’m certain you see the ludicrousness of his proclamations.

We discover early on that Fred’s had a crush since boyhood on his “out of his league” babysitter, Charlotte who motivated him to care about social issues. He had no idea she’d become one of the most prominent and influential women in the world, while he’s been somewhat of a undervalued whistle blower for the local independent newspaper the Brooklyn Advocate. When they finally meet, he’s lost his job in a corporate takeover, and Charlotte makes the snap decision to hire him as her speechwriter.

Fred challenges Charolette’s sliding principles, as it becomes apparent that outside influences are to blame for their abandonment. Together, they navigate a fine line between pragmatic notions and their desire to stay true to their personal convictions. As Fred becomes comfortable with being doted on, Charlotte starts to let her hair down and hang loose—finding her newfound freedom liberating—although she does tread a little too closely to the edge.

The arc of their relationship occurs when Charlotte’s popularity starts to rise in the polls. Her team advises against Fred as a ‘winning boyfriend’ as his sloppy appearance, (his idea of dressing up is to add a baseball cap to his disheveled windbreaker) and his outspoken political views are not the image the pubic will accept nor trust. The key plot line becomes, are they both willing to risk Charlotte’s election chances, which in turn risks her not having a lasting impact on the world? Suddenly the comedic elements take a backseat to high stakes drama.

Long Shot had me laughing hysterically one minute and contemplating the couple’s dilemma the next. I’d be remiss not to mention the accompanying exceptional musical score, songs such as David Bowies’s “Modern Love,” “It Must Have Been Love,” from “Pretty Women” by Roxette and the crème de la crème, the live performance of “Boyz II Men” “Motownphilly” and “End of the Road,” enhanced several scenes.

The Bottom-line, Rogen and Theron create modern, impassioned characters that charm your socks off, yet also propel us to think through their situation and it’s ramifications. The stakes are higher than in Notting Hill — Long Shot asks the question, what is the price of true love?