Bringing a female gaze to one of the 20th century’s most notorious criminals and the influence he exerted over his zealous followers Mary Harron‘s Charlie Says is a compelling look at the power of community and the need to belong. By focusing her film on the women around Charles Manson, rather than directly on Manson himself, Harron shows us how that need can lead to delusion, denial, and destruction. 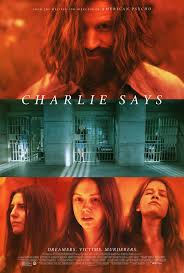 We’re introduced to the Manson Family through wide-eyed Leslie Van Houten (Hannah Murray of Game of Thrones), who finds her way to the Family’s Spahn Ranch commune in 1968. Estranged from her own family and mesmerized by the magnetic Manson (Matt Smith of Doctor Who), Van Houten joins Susan Atkins (Marianne Rendon), Patricia Kenwinkle (Sosie Bacon), and others as a permanent resident at the ranch. In between hits of LSD, Van Houten longs for Manson’s attention but also fears him; she revels in being part of the Family and feeling like she’s found a home where she’s needed and wanted, though part of her seems to recognize that everything “Charlie says” may not be in her best interests. But that part can’t win out over Manson’s influence, and Van Houten — along with the others — winds up committing murder at his direction.

The women’s time with Manson unfolds through a series of flashbacks as activist/writer Karlene Faith (Merrit Weaver) works with them in prison to help them explore their relationship with Manson and their blind loyalty to him. They resist, but as their eyes are inevitably opened to the truth of what they’ve done, they work through powerful emotions. And once they start questioning any part of their life with Manson, the rest of the self-delusion tumbles down like a house of cards.

Faith’s book about Van Houten (The Long Prison Journey of Leslie van Houten: Life Beyond the Cult) was one of the inspirations for Guinevere Turner’s script, alongside Ed Sanders’ book The Family. And although Charlie Says never excuses the women for their crimes, it does help viewers understand just why Manson was able to hold such powerful sway over them and others. In the Manson Family, they found sisterhood — and, Harron and Turner’s film suggests, that sisterhood is what helped sustain them even after they were able to break free of his spell. — Betsy Bozdech

Marilyn Ferdinand: Most people know the sensational climax of the Charles Manson story—gruesome murders that revealed the strange family largely composed of young women whose devotion to Manson offered a dystopian version of the hippie culture that had captured the popular imagination. Most people don’t know the beginning. As unappetizing as the thought of revisiting that horrible time was to me, I couldn’t wait to see what Mary Harron would make of it. Harron, a director who has made precious few feature films, all of them masterful, knocks it out of the park once again with this insightful look at the young, confused, love-starved women who believed that Manson was a beautiful man who would give them everything they always wanted. Hannah Murray as convicted murder Leslie Van Houten is our main guide into the family. Her disarmingly innocent wonder at the sexually free atmosphere, starstruck worship of Manson, whose friends included Beach Boy Dennis Wilson, and psychological deterioration under Manson’s control speak volumes about how cults are made. I can’t recommend this film more highly.

Loren King Two new feature films mark the 50th anniversary of the still- disturbing, endlessly fascinating Tate/LaBianca murders that shook the tony enclaves of Los Angeles to the core in August, 1969. Quentin Tarantino’s star studded Once Upon a Time in Hollywood will get more attention. Mary Harron’s Charlie Says, with its focus on the women in Charles Manson’s “family” who committed the heinous murders, may be the more interesting. Read full review.

Marina Antunes Amidst the recent influx on movies about Charles Manson and his “Family,” Mary Harron’s Charlie Says is a stand out. Written by regular Harron collaborator Guinevere Turner, the movie takes from Ed Sanders’ tome “The Family” but approaches the material from a clearly feminist perspective by introducing the work of social activist Karlene Faith into the mix and giving voice to the women who fell victim to Manson’s brainwashing rhetoric. Features stand out performances from Game of Thrones star Hannah Murray as Leslie Van Houten, 13 Reasons Why’s Sosie Bacon and Matt Smith who is nearly unrecognizable as Manson.

Jennifer Merin Charlie Says is a truth-based narrative that explores the lives and mindsets of the vulnerable young women who were key members of Charles Manson’s ‘family’ and were brainwashed into complete acceptance of his warped philosophy–and into following his orders in daily life and in the unimaginably brutal 1969 slayings of actress Sharon Tate and friends who had gathered at her Los Angeles home. Read full review.

Sandie Angulo Chen: This weekend I saw two fact-based movies about manipulative, misogynistic, maniacal killers – Charles Manson in Charlie Says and Ted Bundy in Extremely Wicked, Shockingly Evil and Vile. While Joe Berlinger’s Netflix drama attempts to humanize the “handsome stranger” serial killer Bundy via one of his only long-term romantic relationships, Mary Harron’s Charlie Says never shies away from the cult leader’s dangerous narcissistic control over the women living at his ranch collective. Played by Matt Smith (who at 6-feet seems miscast as the reportedly impish but charismatic leader), Charlie Manson is portrayed as exerting constant sexual and societal control over the many women in his family — particularly the ones he commanded to kill 7 people over two days, including a nearly 9-month-pregnant Sharon Tate. The story follows three of his acolytes convicted for the Tate/LaBianca murders in August 1969 – Leslie Van Houten (Hannah Murray), Susan Atkins (Marianne Rendon), and Patricia Krenwinkel (Sosie Bacon), and prison educator Karlene Faith (Merritt Wever) who teaches the three women, discusses books about feminism, and attempts to help them see beyond Manson’s unhinged theories. Inspired by Faith’s book about working with Manson’s followers, the movie explores how the three prisoners began to ever-so-slowly question his ravings and seek redemption. The actresses believably play lost and impressionable women who truly believe Charlie’s every word and instruction. Murray (best known for her work on Game of Thrones) is especially sympathetic as the one who could’ve gotten away. Harron doesn’t excuse the women’s actions but does assert that they weren’t just murderers but victims of Manson’s abuse and indoctrination.

Elizabeth Whittemore This is not a story about Charles Manson. This is a story about three women who were manipulated by a mentally ill man who convinced them they were loved. Patricia Krenwinkel, Susan Atkins, and Leslie Van Houten, all became followers of Charles Manson because they were lost and looking for someone to make them feel important. It’s the performances from Hannah Murray, Sosie Bacon, and Merritt Wever that catapult this story forward. Wever, in particular, is the heartbeat that guides these broken girls into reality. Bacon represents every girl that needed Manson (played by Matt Smith with a quiet but fiercely alarming power) to be her father figure. Murray, as Leslie, is the audience. You feel for these ladies through intercut flashbacks and prison scenes. Each flashback is like a peek behind the curtain and into the insanity of a man who thought the Beatles were speaking to him through the “White Album”. Read full review.

Sheila Roberts Canadian filmmaker Mary Harron’s bio crime drama, Charlie Says, offers a provocative new perspective on a notorious case as it examines the Manson Family women at the center of the gruesome Tate-LaBianca murders in the summer of 1969. Like many of Harron’s films, it’s definitely outside the mainstream and involves controversial characters. Read full review.

MaryAnn Johanson I really don’t know what to make of Charlie Says. It seems there’s a new mini vogue at the moment for looking at extremes of male violence, as in The House That Jack Built, about a fictional male serial killer, and Extremely Wicked, Shockingly Evil, and Vile, about real-life serial killer Ted Bundy. And I’m not sure that *Charlie Says* is too far afield from them. It certainly doesn’t glorify Charles Manson or make him in any way sexy or appealing, but it also doesn’t go anywhere deep enough on the women who were in his thrall, and what’s the point of it if it can’t do that? I still don’t understand, after this movie, what was so appealing about Manson to his female followers, and maybe we can never understand. Maybe it’s too big for a movie to capture. Maybe we should just leave assholes like Manson to obscurity?

Cate Marquis: Many films have already been made about Charles Manson and the Tate – LoBianco murders but Mary Harron’s new drama Charlie Says shifts the focus away from Charles Manson, played well by Matt Smith, to take a close look at three of the women who followed, and ultimately killed for him. Through conversations that take place in prison long after the murders, between a feminist teacher/social worker (Merritt Wever) and the three women, played by Hannah Murray, Sosie Bacon and Marianne Rendon, who are still enthralled by Manson, we explore how they fell under Manson’s power and even the anatomy of fanatical cults develop by, particularly pseudo-religious personality cults like Manson’s. It is a fascinating and horrifying journey. Harron approaches this in an intelligent way, moving through the devolution into madness in step-wise fashion, like watching that frog in a jar where the water is slowly rising. Harron’s use of the outsider view, through the teacher, allows the audience to see parallels to the fanatical followers of Rasputin and the false hopes offered by Jim Jones, and even echos with contemporary fanatical movements like ISIS. However, audiences only interested in Manson and the murders may be disappointed by the film’s more thoughtful and women-centric approach.