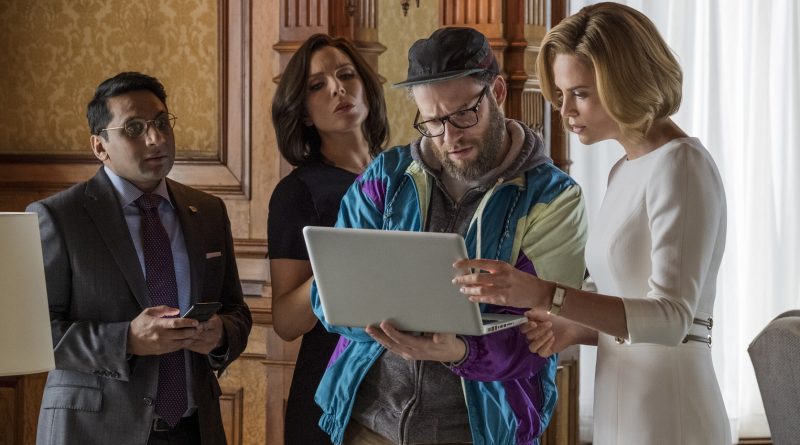 Charlize Theron and Seth Rogen prove a potent power couple in more ways than one in the uproarious romantic comedy “Long Shot.”

Rogen stars as Fred Flarsky, a crusading investigative journalist for a hard-hitting alternative weekly. When his Brooklyn paper is bought out by an underhanded media mogul (Andy Serkis) who guts the staff, Fred quits on principle.

His high-rolling best friend Lance (O’Shea Jackson Jr.) invites him to a swanky charity event to drown his sorrows, and Fred unexpectedly reunites there with his childhood babysitter and first crush, Charlotte Field (Theron), who has followed her youthful political dreams and become U.S. Secretary of State.

When clueless actor-turned-commander-in-chief President Chambers (Bob Odenkirk) privately reveals he will not run for reelection and would be willing to endorse her, Charlotte begins planning a promising presidential run. Since she’s an accomplished, hard-working woman, naturally that means she has to work on seeming funnier and more likable to voters. So, she hires Fred to punch up her speeches, to the dismay of her seasoned advisers June and Tom (Maggie Millikin and Ravel Patel).

Although he is a political novice in an ugly ball cap and neon windbreaker, Fred accompanies Charlotte on a whirlwind global tour touting her ambitious environmental agenda, and he taps into her girlhood idealism to humanize her speeches. Reasoning that getting to know her better will help him write better speeches for her, Fred and Charlotte start spending more time together – and the proverbial sparks start flying.

Not only do Theron and Rogen have surprisingly robust chemistry, but “Long Shot” also gives the multifaceted Theron – who has already established herself as a formidable femme fatale, a fierce action hero and an Oscar-winning dramatic performer – a chance show to off her comedic chops. An overachieving woman’s worst nightmare, the scene in which Charlotte has to negotiate an international hostage situation while wasted after a night of partying with Fred is one of the movie’s funniest, if unlikely, moments.

Screenwriters Dan Sterling (“The Interview” with Rogen) and Liz Hannah (“The Post”) provide the just-right mix of the sweet and raunchy humor that made Rogen famous, while also balancing the romantic and political aspects of the comedy. It’s refreshing to actually laugh about politics for a while.

It’s also bracing to see a romantic comedy free of most of the misogyny and plot machinations that have long plagued the cinematic subgenre. Directed by Jonathan Levine (“50/50,” also with Rogen), “Long Shot” avoids many common rom-com pitfalls by creating an authentic story based on charming yet flawed characters coming together because they truly like each other and want to be together. While not blind to Charlotte’s beauty, Fred adores her intelligence and drive and is happy to be along for the ride as she changes the world, while Charlotte looks beyond Fred’s rough edges, respects his integrity and appreciates his humor.

Although it gets a bit silly and farfetched, “Long Shot” delivers a nice payoff.