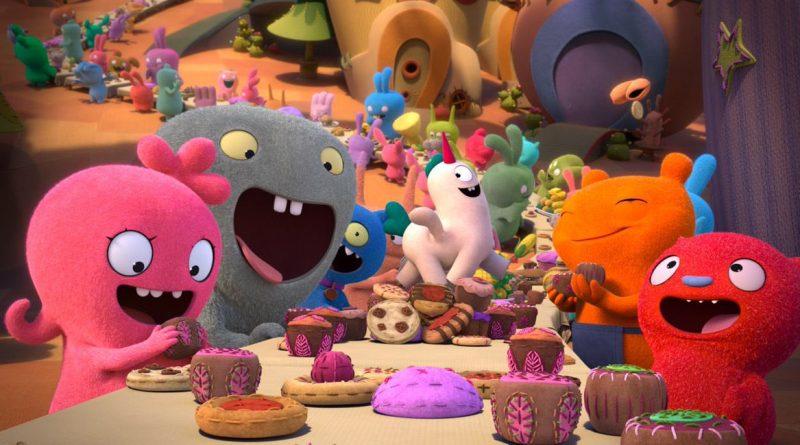 Propelled by powerhouse merchandising, Ugly Dolls is a specialty brand that’s attempting to insinuate itself into American popular culture. There are the colorful, fuzzy-felt toys, of course, but also T-shirts, nightgowns, blankets figurines, Pez dispensers, even McDonald’s Happy Meals.

Blandly scripted by Alison Peck and tediously directed by Kelly Asbury, this animated film relies far too much on the dubious appeal of its pop-star voiced animated characters.

Pink, gap-toothed Moxy (Kelly Clarkson) awakens every morning believing that this will be the day she’s adopted and loved by a human child. Her spunk is contagious as she tries to convince her flawed neighbors that a better future lies just ahead.

What Moxy doesn’t know is that she and her weird friends – Babo (Gabriel Iglesias), Ugly Dog (Pitbull), Wedgehead (Emma Roberts) and Wage (Wanda Sykes) – are factory rejects. Instead of heading to Perfection, they’ve been dumped in Uglyville, where Mayor Ox (Blake Shelton) makes sure everyone lives in peaceful ignorance.

After a dubious tea-leaf reading by Lucky Bat (Leeholm Wang), curious Moxy is determined to venture into the outside world, where the Institute of Perfection’s judgmental guru/crooner Lou (Nick Jonas) forbids stains, smudges and smells, condemning insolent insurgents to the washing machine.

“If you want someone to love you, you’ve got to look like me,” he says. “Kids don’t want ugly.”

Eventually, after a rigorous series of tests called “the gauntlet,” Moxy et al learn that nobody’s really perfect and they should value their own individuality. It’s all very formulaic and predictable, lifting inspiration from “Toy Story,” “The LEGO Movie,” “Smurfs,” “Trolls,” etc.

Created in 2001 by David Horvath and his wife, Sun-Min Kim, the first Ugly Dolls popped up in Erik Nokamura’s Japanese toy store Giant Robot in Los Angeles. Soon after, the Horvaths formed Pretty Ugly LLC to manufacture the toys in South Korea.

On the Granger Movie Gauge of 1 to 10, “Ugly Dolls” is a preachy, lethargic 3 – a blatant infomercial for plush Hasbro toys.