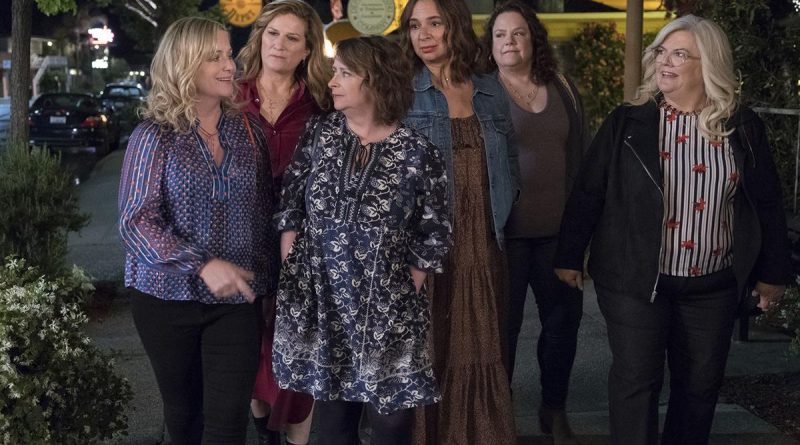 A terrific ensemble that includes Rachel Dratch, Maya Rudolph and Amy Poehler (who also directs) riffs its way through some predictable and formulaic gags in Poehler’s sitcom-y version of Sideways.

The fun is in how these gifted sketch comics, many of them SNL alums including Tina Fey, banter with and play off one another. The premise is that six old friends take a “girls’ trip” to Napa Valley to celebrate the 50th birthday of mousy Rebecca (Dratch). We’re introduced to a cartoon ensemble of types: there’s Poehler’s Abby, the well-meaning but rigid planner in the mold of her famous Parks and Recreation character Leslie Knope; Rudolph’s Naomi, a mother looking to let loose; Ana Gasteyer’s Catherine, the workaholic tethered to her cell phone; Paula Pell’s Val, the good natured token lesbian looking for love; and Emily Spivey as droll pessimist Jenny. (Spivey wrote the script with fellow SNL writers Poehler and Liz Cackowski who has a brief but funny scene as an uptight wine expert). Fey shows up as Tammy, the acerbic owner of the house that the women rent for their holiday but her character never finds a groove; she’s neither antagonist nor a compliment to the others.

Jason Schwartzman as a chef as tour guide who “comes with the house” seems to be there just to inject some unnecessary testosterone into the proceedings. Cherry Jones, as usual, aces her screen time but it’s a throwaway role as a tarot card reader who accentuates the negative. Maya Erskine’s Jade, an artist who creates ironic portraits of The Nanny’s Fran Drescher, is at the center of one of the movie’s most original and sharp sequences as the women spar with an art gallery full of annoyingly assured, overly self-confident millennials.

All of the excursions and dinners and late night partying are just reasons to let these gifted comics interact; just watching Rudolph mime dance moves is enough to induce giggles. But its disappointing that the film resorts to “over the hill’ jokes — why are women barely out of their 40s on so much medication, with jokes about antidepressants, Wellbutrin, and Val’s double knee replacement? This lazy humor would be offensive in the latest Diane Keaton geriatric comedy but pretty ridiculous in a feel-good film about friendship aimed, presumably, at the Bridesmaids crowd. The cliched finale with the gals bonding in a hospital ER after a kooky mishap also feels like a sitcom group hug ending.

But despite its shortcomings, “Wine Country” has enough laughs and tender moments to make it worthwhile.