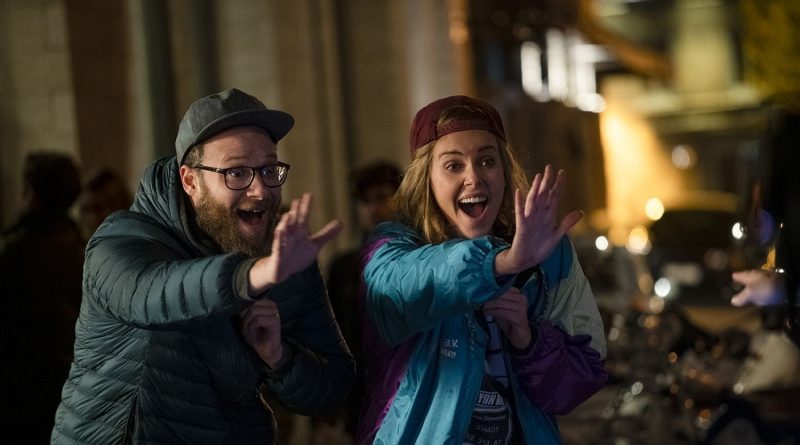 Since the 1930s, audiences have loved Hollywood’s screwball comedies. Unfortunately, in this highly politicized, PC-oriented time, they’re few and far-between. Now, Charlize Theron and Seth Rogen team up as mismatched lovers in a raunchy, far-fetched but funny romance.

Despondent, he joins his childhood buddy Lance (O’Shea Jackson Jr.) for a pity-party that winds up at a fancy Manhattan gala.

When he spies Wembley, Fred causes a commotion by telling him off, catching the attention of glamorous U.S. Secretary of State Charlotte Field (Theron), who recognizes him as the 13 year-old neighbor she used to babysit for. That’s their “meet cute” moment.

Since the current Oval Office occupant (Bob Odenkirk), a vain former TV actor, now wants to be a movie star, savvy, idealistic Charlotte is readying a run for POTUS.

Since Charlotte’s consultants told that she’s not funny enough, hiring quick-witted Fred to spice up her speeches seems like a good idea. To her, perhaps, but not to her disapproving aides (June Diane Raphael, Ravi Patel) who are dismayed by Fred’s unkempt appearance and outspoken manner.

Soon, gauche, lovelorn Fred is jetting around the world with elegant, refined Charlotte as she promotes an ambitious global environmental agenda, disrupting diplomatic dinners and dodging an insurrection.

Somewhere along the way, they tumble into bed and get high, perhaps not in that order. Charlotte even manages to handle an international crisis as their clandestine coupling continues.

“Could you maybe not tell anybody about this?” Fred asks her Secret Service agent.

“They wouldn’t believe me anyway,” he retorts.

On the Granger Movie Gauge of 1 to 10, Long Shot is an absurd 7 – escapist fun for an adult audience.