Few film festivals feature feel-good films or screwball comedies among their often austere line-ups.
But this is where the Okinawa International Movie Festival, completing its 11th year just last week, has always differed.

“We never set out to compete with the rest of the world’s film festivals – or even other film festivals in our own country,” explains OIMF Committee President, Mr Hiroshi Osaki. “We always just wanted to make people feel happy and give them something to smile about which is why most of our films are comedies.”

Centered around the Okinawan capital of Naha, OIMF boasts possibly one of the longest red carpets in film festival history, culminating in a half-mile long carpet along one of the city’s busiest shopping streets. Instead of remaining aloof from their fans, it is here where all the festival’s glamorous movie stars walk, greeting their fans thronged along the red-carpeted roadside, taking selfies and shaking hands. 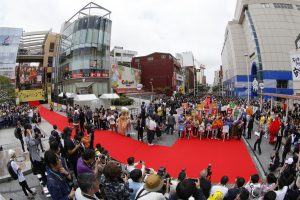 Having launched its inaugural festival as largely a local affair with just 18 films in competition, this year’s 11th edition of OIMF has grown to include 83 films, showcasing TV and film selections from Vietnam, Indonesia, Korea, Taiwan, UK, Thailand, China, Russia and Myanmar.

Initially slow to catch up with the wave of new female directors, this year’s OIMF showcased the work of four female directed movies with Momoko Fukada’s My Father, The Bride [Japan], Kyi Phyu Shin’s My Country My Home [Myanmar/Japan], Akiko Ooku’s My Sweet Grappa Remedies [Japan] and Hana Matsumoto’s Come on, kiss Me Again [Japan] playing among its prestigious major categories.
Consequentially, the 2019 festival attracted a record number of actresses to its red carpet including Ayame Misaki [Born Bone Born], Honaka Matsumoto [My Father the Bride] and Wutt Hmone Shwe Yi [My Country My Home].

For Matsumoto, this year marking her second appearance at OIMF, Okinawa brings back fond memories, “Like so many Japanese people, I first came here with a school trip when I was a teenager and then I was also at the festival three years ago. Okinawa has a unique, original and very laid-back atmosphere,” she says.

If the annual Tokyo International Film Festival attempts to be a world player, held annually after Venice and Toronto, then OIMF doesn’t even look to Tokyo for cues, blatantly holding its annual festival every April, a month before Cannes marks the official start of award season.

One must consider Okinawa’s particular place in history to truly understand OIMF’s desire to both be recognized but also its stated goal to bring joy to its people.

Invaded by the US military towards the end of World War II in 1945, a third of Okinawa’s civilian population were wiped out while some 26,000 US troops remain based there to this day, using the islands as a staging post for the subsequent Korean and Vietnam wars.

“Okinawa was the only island invaded by US forces during WWII; the only battleground site during the Pacific War so it has a very sad history. After the war there was no electricity or water and people suffered tremendously so, in order to overcome that sad and bitter history people, used laughter as a weapon,” says Okinawan native Mr Osaki when AWFJ chats with him in Naha, Okinawa.

“That’s why its so important for our own four-day film festival to have an overall concept of ‘Laugh & Peace’,” he adds.

Mr Osaki – who also serves as Representative Director and Chairman of the Board of Japanese entertainment conglomerate, Yoshimoto Kogyo Co. Ltd – doesn’t mind admitting that when he first dreamed up the idea of OIMF, it was also with the goal of promoting his own burgeoning entertainment empire and roster of 500 + comedians, although today he believes he has created something much greater.

The final impetus would be when he attended Cannes in 2007 where his comedy client, Hitoshi Matsumoto, made his directorial debut with Big Man Japan, winning a place in the prestigious Director’s Fortnight.

“We had such a great time in Cannes and immediately wanted to do it every year. But of course we couldn’t really do that so we decided we would do our own festival in Okinawa. And that was it – the idea was born in ten seconds!”

Since its 2009 debut, OIMF has encouraged numerous home-grown talent to direct and star in their own films, among them this year’s crowd-pleaser, Born, Bone, Born, written and directed by Okinawan comedian Toshiyuki Teruya, best known under his stage name of Gori.

“Its particularly satisfying to nurture local talent but our aim is to encourage directors from across Japan too and showcase them for the world,” he says pointing to his director client Ueda Shinichiro, whose 2017 comedy horror festival winner, One Cut of the Dead, is today being remade in Hollywood.

“Okinawa usually gets media attention for political tensions, military bases and its sad history of war but there are many fun aspects about this island so I wanted to highlight that; our film festival serving as a first step. “Okinawa is one of the poorer areas of Japan with families struggling to make ends meet and so many divorced people. Our main industry is tourism and I want to make Okinawa a hub of entertainment instead, using all of our beautiful islands,” says Mr Osaki.

Held in a variety of venues in and around Naha including Okinawa City Hall, Shintosin Park and Ginowan Tropical Beach the festival also utilizes it’s signature Laugh & Peace Entertainment school, a year-round venue aimed at involving children in cutting-edge technology.

Such has been the success of the school, this year the festival’s founders announced ambitious plans to launch a Japan-wide educational programme in October, titled Laugh & Peace Mother featuring an educational app as well as physical schools located nationwide.