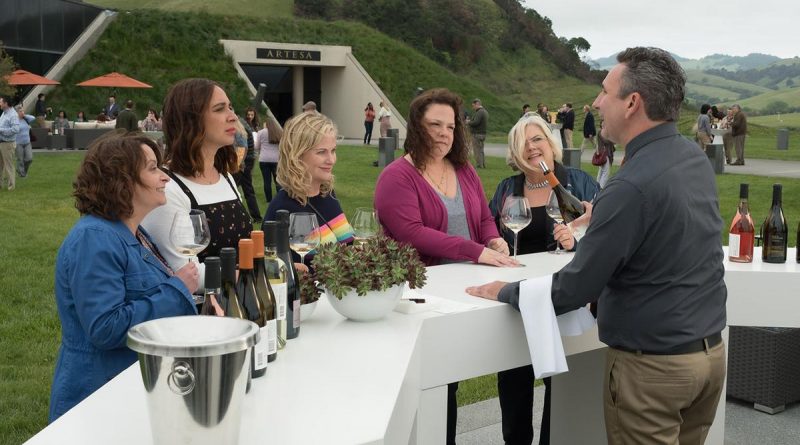 Wine Country reunites a fistful of SNL alumna plus a few more funny women, for a road trip movie about a girls weekend in California wine country. Wine, women and song (there is a surprising amount of harmonizing) are the rule for this light female-centric comedy, in which a bunch of middle-aged gal pals, who first met working a a pizza joint in Chicago, reunite for a weekend trip to celebrate a 50th birthday. The birthday gal is Rebecca, (Rachel Dratch), with Amy Poehler playing Abby the super-organizer (there is always one) who has planned out every moment. Tina Fey plays the dry-witted woman who owns the house they are renting, and turns up from time to time. The rest of the friends are played by Maya Rudolph, Paula Pell, Emily Spivey and Ana Gasteyer.

Refreshingly, this is a female buddy comedy that is not all about men – it is about the women – and there is something cool about that. Wine Country does follow the rules of other buddy comedies about long-time, aging friends (City Slickers comes to mind), with familiar types and “getting older” jokes. But apart from some grumbling about one friend’s jerk husband, there are few conversations about men, and the characters are not always obsessing over romance. Better yet, the story is not built around subplots of romantic flings or flirtations. The one romantic subplot is with the one lesbian woman in the group. Basically, there is really only one male character, a houseboy/cook/driver/tour guide named Devon (Jason Schwartzman) who “comes with the house,” a character who is more a comic idiot than anything.

Making Wine Country about the women, not the men in their lives as so many comedies do, frees these funny women to just be funny, and create comedy built around women’s experiences. There are plenty of moments that will have women in the audience nodding in recognition, if not just laughing out loud. The comedy starts strong, with the weekend kicking off with a lively dinner where the wine flows, even heavier drinking late into the evening. While the film loses some steam in the second half (as they weekends tend to do, as the participants wear out), it deserves credit to keeping the situations within the realm of possibility and not going full-out ridiculous to end the comedy with a big, unrealistic bang (only a little goofball). Keeping it within the real is a smart move, and lets the film wrap up on a nice note and warm feeling.