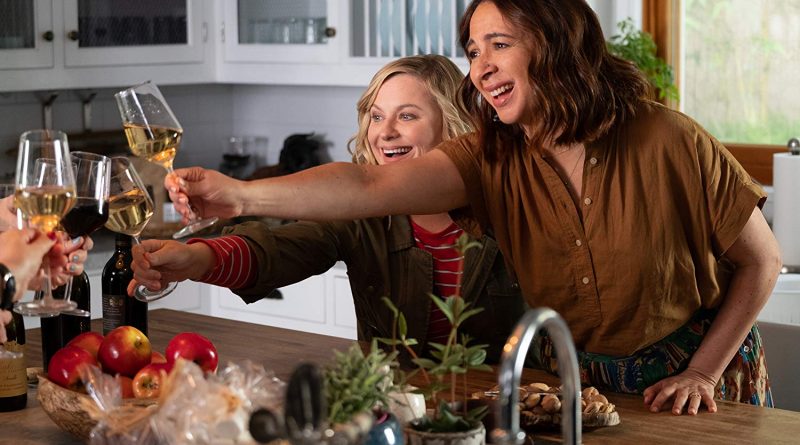 Netflix’s Wine Country isn’t quite Sideways for a gaggle of six middle-aged gals. For one, it is set in Napa and not Santa Barbara. For another, writers Emily Spivey and Liz Cackowski, who show up on the screen as well, keep the dialogue at a sitcom-level pitch and packed with zingers. That includes the phrase, “Things we say now,” which is akin to the The Office’s “That’s what she said,” but with an age-related slant rather than a dirty joke. That a CPAP device is a recurring gag should tell you something.

As directed by Amy Poehler, whose control-freak Abby is in charge of the jam-packed itinerary as the crew celebrates the 50th birthday of mutual pal Rebecca (Rachel Dratch), she is better at the comical situations than the more heartfelt encounters. While the cast is peppered with funny ladies, including other Saturday Night Live alums such as Maya Rudolph, Ana Gasteyer and Tina Fey, they are rarely allowed to stop being stock characters rather than feel like real human beings. A few of the players especially Paula Pell, a comedy writer who makes her lesbian who is looking for love more than just a gay stereotype, along with the amazing Cherry Jones as a tarot card reader who seems to enjoy delivering bad news a little too much, manage to elevate the material.

That said, you will likely be amused now and then – from an art exhibit built around Fran Drescher’s The Nanny to Jason Schwartzman as a house boy who makes the world’s biggest batch of paella — even if this isn’t a primo vintage comedy moment for lady kind.