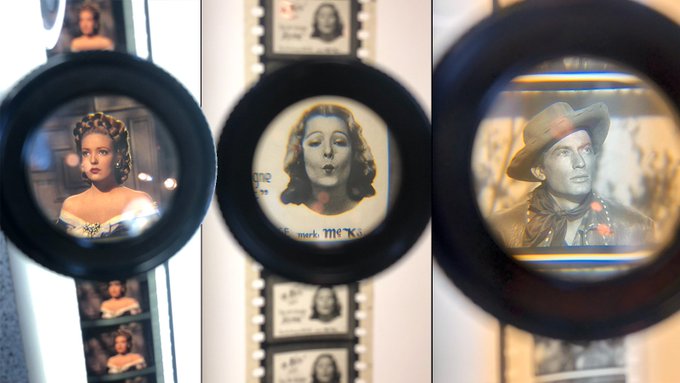 Many festivals feature contemporary films, domestic and international. The Nitrate Picture Show Festival of Film Conservation, as its title signals, celebrates nitrate film through gorgeous black and white as well as color selections from archives around the world: The fifth iteration of this festival took place, as always, at the George Eastman Museum Dryden Theatre in Rochester, New York. From Friday, May 3 through Sunday, May 5, ten different programs presented films ranging from Luis Buñuel’s 1930 L’ Age d’Or to two films from 1950: Michael Powell and Emeric Pressburger’s Gone to Earth (UK) and Gordon Douglas’ The Nevadan (US).

With the exception of the closing film titled Blind Date with Nitrate (revealed only as the film’s credits roll), the program is announced at 9:00 a.m. opening day. The first screening begins at 4:30, preceded this year by two lectures. At 1:30, from Britain’s Imperial War Museum, David Walsh described technical aspects of nitrate film and current preservation efforts. With an M.A. in chemistry from Oxford University, he illustrated unusual characteristics of nitrate, highlighting information we’ve learned over the past few years. His speech was followed by Elaine Burrows’ James Card Memorial Lecture, named in honor of the first Eastman Museum film curator and founder of the moving image collection. Burrows began working for the London National Film Archive, became head of the archive’s Viewing Service, and, most recently, has worked with EUscreen offering online television programs from across Europe and as editor of the Journal of Film Preservation.

After the two lectures, the film program kicked off with a selection of eight shorts. They ranged from the historically serious 1942 Battle of Midway in technicolor. Director John Ford also shot portions of the footage during which he was wounded. Released as a documentary during WWII with narration by Ray Milland, Donald Crisp, and Jane Darwell, Battle of Midway reveals a solemn and affirmative approach to this strategic battle.

All of the short subjects are not so serious, as Frank Tashlin’s 1944 Swooner Crooner proves. A WWII propaganda cartoon, it uses animated hens to sell the idea of increased, spirited production. My favorite of the shorts was Dave Fleischer’s 1936 The Cobweb Hotel in which he animates a spider hotel inviting flies to visit but never leave, an idea reportedly inspired by studying his own desk.

Of the nine feature films, I’m partial to film noir and, therefore, was ecstatic watching Edmund Goulding’s 1947 Nightmare Alley, starring Tyrone Power and Joan Blondell as, initially, circus acts with Power eventually devising a deceptive nightclub act. It’s downhill from there. In another gorgeous black-and-white print, in one of his best performances, Humphrey Bogart anchors director John Cromwell’s 1947 Dead Reckoning. A nerve-jangling story narrated by Captain ‘Rip’ Murdock, Bogart/Rip anchors virtually every scene, with Lizabeth Scott as the femme fatale. If that didn’t provide sufficient cinematic glee, it was followed by William Wyler’s 1933 Counsellor-at-Law with John Barrymore portraying a Jewish lawyer. George Simon/Barrymore segues flawlessly and energetically through emotional registers, incredibly competent in some instances, frantic in others, desperate and betrayed by film’s conclusion.

There were also selections for those who love color nitrate, and who wouldn’t after watching Preston Sturges’ 1949 The Beautiful Blonde from Bashful Bend in technicolor. Betty Grable commands the camera with Cesar Romero scrambling to keep up. More surprising to me was Gordon Douglas’ 1950 The Nevadan in Cinecolor, that rare filmic configuration with the emulsion on both sides of the base, red on one side, green on the other. Add Rebecca and People in the Summer Night, presented with an introductory Swedish short, and we’re in the realm of cinematic heaven.

Every film, including each short subject, is introduced by a knowledgeable archive representative, adding immensely to understanding the value of the selection and appreciating its preservation. In that respect, each description in the program briefly describes the film’s source and the print shrinkage along with excerpts from reviews at the film’s release. Sources of the nitrates prints this year included: Academy Film Archive LA, UCLA Film and Television Archive, Library of Congress , Museum of Modern Art NY, George Eastman Museum, Austrian Film Museum/Vienna, Swedish Film Institute/Stockholm, and Finland’s National Audiovisual Institute.

As if all this were not sufficient to overwhelm those who love cinema, before the festival begins, several tours are offered, each with a separate charge and limited space. I took the Technology Collection Tour of the Eastman Museum collection, an overwhelming treasure trove of 16,000 artifacts from the earliest photographic equipment and cameras to recent equipment. I felt like a child in a candy store as Curator Todd Gustavson expertly explained an astonishing range of well-preserved items.

I also attended Process Historian Mark Osterman and Historic Process Specialist Nick Brandreth’s workshop Making Nitrate Film. I thought I understood the nature of nitrate film stock, but only after watching this demonstration, from guncotton to nitrate film production, did I approach appreciating the volatility and technical expertise needed to make this film stock. 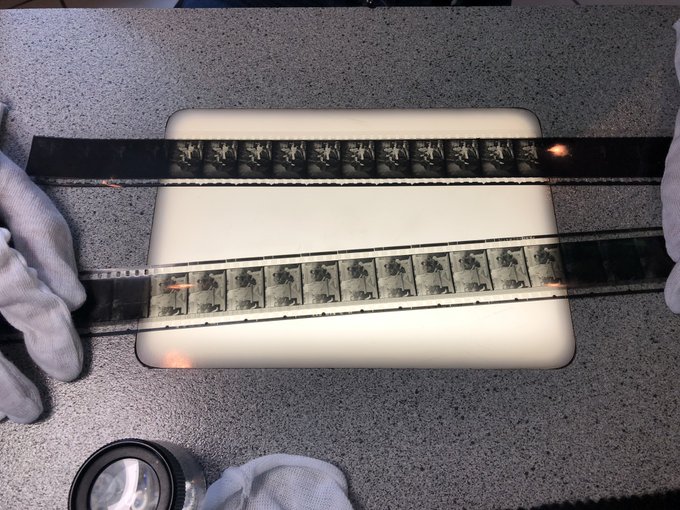 Also available throughout the festival is what is called The Nitrate Touch. Representatives of the Moving Image Department and L. Jeffrey Selznick School of Film Preservation students sit at two rewind benches with a different film each morning and afternoon. The staff and students invite festival attendees, after putting on white gloves, to use a magnifying glass to examine still frames, edge codes, splices, and other optical details. I looked at the US Army print of the 1945 Atomic Blast at Nagasaki, shot at the time, a chilling but important historical artifact.

Other tours I did not take include the Nitrate Vault Tour at the Louis B. Mayer Conservation Center and the Kodak Factory Tour. I did conclude my festival on Monday morning with a tour of the Dryden Theatre projection booth, adding even more awe to my respect for the projectionists and their safety precautions; for example, ‘closed head’ projectors, fire rollers and valves, water cooling tubes plus iron plates that projectionists would drop into place over the windows should a fire occur. With the projectionists’ skill, caution and attendance to safety features demonstrated during the tour, this is highly unlikely, the precautions impressive. I must add that this is the only festival I’ve attended that introduces the projectionists before each show to acknowledges their training and expertise.

I’ve attended a lot of film festivals (Cannes, Telluride, Toronto, Palm Springs, Sundance, Cleveland, St. Louis, etc.), but seldom have I experienced the joyful embrace of what cinema historically has and continues to offer. Next year’s Nitrate Film Festival will take place June 4 to 7, and I am even more eager than I was this year. Unique, well organized and expertly run, the Nitrate Festival offers a treat for those who love film. I could gush even more about the joy of watching such aesthetically gorgeous prints (original colors restored and the intensity of the silver yielding superb black and white images) and learning so much about film history, but will wrap up, hoping anyone interested heads to the Eastman website.