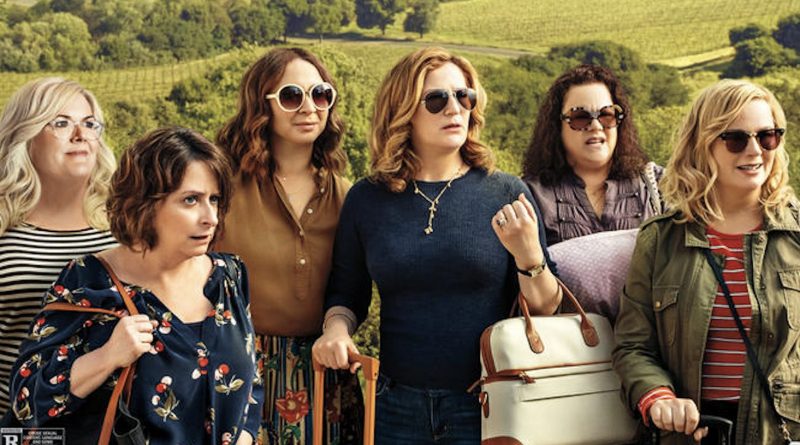 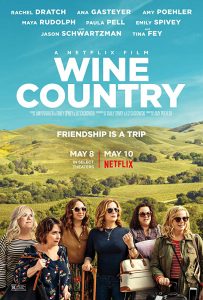 Lifelong friends Abby (Poehler), Naomi (Rudolph), Catherine (Ana Gasteyer), Val (Paula Pell), Jenny (Emily Spivey), and Rebecca (Dratch) convene in Napa for the weekend to celebrate Rebecca’s 50th birthday. Pals since they all waitressed together at a Chicago pizza joint decades ago, the six women are looking forward to catching up and relaxing … if Abby’s meticulously planned schedule allows for it, of course. But then a prickly tarot card reader (Cherry Jones) gives them some pretty dire predictions, and long-standing issues — both personal and private — start bubbling to the surface. The wine keeps flowing, but can their friendship withstand the weekend?

Wine Country isn’t as laugh-out-loud raunchy as something like Bridesmaids, but it has a knowing, relatable humor that its target audience is sure to appreciate. And for viewers who’ve been fans of the cast since their SNL days, it’s delightful to see the old gang back together (Spivey, who co-authored the screenplay, and Pell were both writers during the other women’s tenure in front of the cameras). Tina Fey even shows up in a supporting role, giving the impression that Poehler — who also directed — used the film as an excuse to score a getaway for her and her BFFs.

And who can blame her? Wine Country isn’t a perfect film, but the cast’s genuine affection for each other shines through, and the women’s real-world issues — they’re dealing with everything from job stress to divorce to health worries — help reconcile the fact that their “little weekend away” is the type of luxury vacation that few people can actually afford. Aging isn’t something that these women are thrilled about, but they’re able to appreciate everything that has gotten them to this point in their lives, especially one another. — Betsy Bozdech

Sheila Roberts: What a joy to watch Amy Poehler’s Wine Country and see what happens when a superbly talented group of women come together to produce something creative. It’s a well-directed, femme-centric film about a group of lifelong gal pals who embark on a weekend trip to Napa Valley to celebrate their friend’s 50th birthday. Poehler helms from a strong script by Liz Cackowski and Emily Spivey that takes a fun yet introspective look at lifestyle, mid-life crisis, and the wide range of ups and downs that come with decades of friendship. Read full review.

Leslie Combemale: Based on the experience of co-writers Liz Cackowski and Emily Spivey’s trip to Napa for Rachel Dratch’s 50th birthday, Wine Country feels as real as its basis in fact. These are funny ladies, and the movie not only leans into their natural comedic talents, director Amy Poehler equally mines their improvisational abilities and longstanding friendship to great effect. Women of a certain age who watch the mid-life struggles, easy laughter, and committed sisterhood will nod in understanding, but all viewers will find fun, friendship, and snark enough to enjoy. Grab some of your gal pals and plan for a night in with a good chardonnay to laugh, and possibly cry, with these exceptional actresses. It’s always a good time to celebrate a good movie full of strong female characters, directed, written, and scored by women. Cheers!

MaryAnn Johanson: I feel so seen by the delicious Wine Country! It perfectly captures female friendship, and — more importantly — female friendships among “older” women as we struggle with our bodies starting to break down and our careers taking turns (for the better or for the worse) just as we’re really coming into our confidence and figuring out who we are. Snarky and bitter, because that’s the perpetual Generation X mood, but also loving and warm and friendly and oh-so supportive. So great.

Marina Antunes: It would be easy to write off Amy Poehler’s Wine Country as just another “women on vacation” comedy and though in some respects it follows the formula, it sets itself apart with some wonderfully charming moments and a cast with great chemistry that obviously has a history. Paula Bell is particularly charming. My new favourite thing is to dance it off.

Nell Minow: The real-life friendship of these women inspires not just great on-screen chemistry but an exceptionally intimate portrayal of the fragility and necessity of our closest connections. We often say of performers we love that we would pay to see them eat lunch. It turns out that it’s even better to see them drink wine.

Susan Wloszczyna: Netflix’s Wine Country isn’t quite Sideways for a gaggle of six middle-aged gals. For one, it is set in Napa and not Santa Barbara. For another, writers Emily Spivey and Liz Cackowski, who show up on the screen as well, keep the dialogue at a sitcom-level pitch and packed with zingers. That includes the phrase, “Things we say now,” which is akin to the The Office’s “That’s what she said,” but with an age-related slant rather than a dirty joke. That a CPAP device is a recurring gag should tell you something. Read full review.

Marilyn Ferdinand: In her sophomore effort as a film director, Amy Poehler has assembled some of the funniest women on the planet (Rachel Dratch, Ana Gasteyer, Maya Rudolph, Paula Pell, and Emily Spivey) to play old friends who meet for a three-day 50th birthday celebration in Napa Valley. Wine Country is familiar fare—even the secrets the women keep from each other won’t surprise anyone but the characters—but watching this cast work together as they skewer everything from incomprehensible millennial culture (a one-woman art show centered on the sitcom “The Nanny”) to California-style pretensions (an organic winery that forbids people to walk in the vineyards for fear of contamination) is sheer heaven. Cherry Jones as a misanthrophic psychic and Tina Fey as the cynical owner of the house the women rent are more than the cherry on top—their characters practically steal the show.

Jennifer Merin: Amy Poehler’s Wine Country is a truly femme centric production — cast and crew — through and through. The ensemble is essentially a feminist reunion of Saturday Night Live sketch comediennes. And, Liz Cackowski and Emily Spivey’s script stakes out and covers territory that is certainly familiar to women who will delight in seeing the film’s refreshing feminist perspective on screen. Read full review.

Sandie Angulo Chen: The award-winning comedic ensemble of Amy Poehler, Maya Rudolph, Rachel Dratch, Ana Gasteyer, Paula Pell, Emily Spivey, and Tina Fey should be enough to convince audiences to see Poehler’s feature film directorial debut Wine Country. A veritable Saturday Night Live reunion, the comedy celebrates the friendship of women circling 50, and all the actors truly are between 46 and 56. The story follows a group of friends traveling to Napa Valley together to celebrate a 50th birthday. All of the women are in fantastic form showing off their comedic chops, but Pell is particularly luminous and hilarious. While there are a couple of men in the film – including Jason Schwartzman as the rental home’s personal chef – they’re mostly irrelevant. This is a movie made by and for women over 40. So round up your closest girlfriends and watch it with a glass of red, white, or rosé in hand.

Elizabeth Whittemore: Wine Country is what happens when talented women are allowed to bring everything they are to the table. This film has all the funny one would expect from such an SNL alumni-heavy ensemble. It’s raunchy, honest, and pee your pants hilarious. While a vast majority of the humor is generationally specific, the themes of friendship, fear, and the unknown are universal. Amy Poehler has presented us with a smart film. It avoids cliches with very authentic characters that you can relate to. It reminds us that no relationship is perfect and that flaws make us human beings. We know each of these ladies in real-life. I don’t know how much of this film is improvised but I’d be happy to watch it over and over just to guess. The soundtrack alone is art and sense memory magic. Wine Country is the film all women need right now. Sit back, relax, have a glass (or 2) and just enjoy every last minute of it.

Loren King: A terrific ensemble that includes Rachel Dratch, Maya Rudolph and Amy Poehler (who also directs) riffs its way through some predictable and formulaic gags in Poehler’s sitcom-y version of Sideways. The fun is in how these gifted sketch comics, many of them SNL alums including Tina Fey, banter with and play off one another. Read full review.

Cate Marquis: Refreshingly, this is a female buddy comedy that is not all about men – it is about the women – and there is something cool about that. Wine Country does follow the rules of other buddy comedies about long-time, aging friends (City Slickers comes to mind), with familiar types and “getting older” jokes. But apart from some grumbling about one friend’s jerk husband, there are few conversations about men, and the characters are not always obsessing over romance. Better yet, the story is not built around subplots of romantic flings or flirtations. The one romantic subplot is with the one lesbian woman in the group. Basically, there is really only one male character, a houseboy/cook/driver/tour guide named Devon (Jason Schwartzman) who “comes with the house,” a character who is more a comic idiot than anything. Read full review.