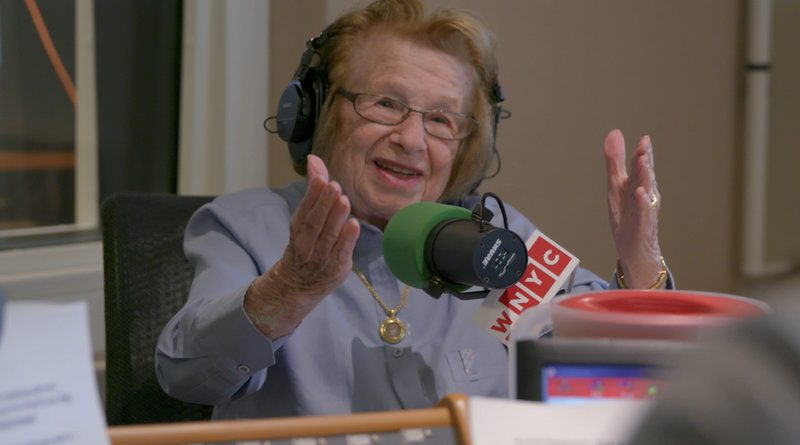 For many people, the name Dr. Ruth Westheimer summons an image of a diminutive sex therapist who was ubiquitous on television in the late 1980s. The new documentary Ask Dr. Ruth delivers an entertaining, enlightening portrait that shows she was, and is, so much more.

Director Ryan White, whose credits include two excellent documentaries, the Netflix series The Keepers and the HBO movie The Case Against 8, knows enough to let his unique subject be herself and do the talking. The film chronicles Westheimer’s rich backstory while following her around in the present as the 90-year old continues a nonstop pace of lectures, radio and TV appearances and book signings that would leave most people half her age in the dust.

Ask Dr. Ruth puts Westheimer’s zest for life and progressive attitudes toward sex into context. Born Karola Ruth Siegel in Frankfurt, Germany, she was a beloved only child whose parents sent her to an orphanage in Switzerland to escape the Nazis. Both her parents were killed in the Holocaust.

“My parents gave me life twice: when I was born and when they sent me to Switzerland as a 10 year-old,” Westheimer says in the film. Her loneliness and grief, coupled with an innate optimism and positive sense of herself and the world, is evident in the passages from her childhood diary. The persecution of Jews during the Holocaust taught her, she says, to “never demonize or call anyone ‘subhuman.’”

Through photographs and interviews, the film delivers a portrait of young Ruth as smart, spunky and self reliant. In the orphanage, she shared a close, chaste relationship with a young man based on their shared thirst for knowledge. But the boy was accorded the privilege of attending school while Ruth was not. Refugee girls had to clean the orphanage and take care of the Swiss children. In the film, Ruth recounts how her young boyfriend would smuggle his schoolbooks into her room at night and hide under her bed while she devoured them.

After the war, 17-year old Ruth emigrated to Palestine, fought with the Israeli army during the Israeli War of Independence in 1948, and was severely wounded on her 20th birthday when a bomb exploded right next to her. One of the most touching sequences in the film is her recounting of her emigration to the United States in 1956. She could afford only a fourth class ticket, but as the ship approached New York, she and other passengers defied the rules and went to the upper deck because they wanted to glimpse the Statue of Liberty.

“When I saw that miracle in the sky, that symbol of freedom for refugees, I knew this was home,” she says.

She has lived in the same Washington Heights apartment for 54 years. Two early marriages ended and she was left to raise a child alone, so she cleaned houses for a living while earning graduate degrees as a sex therapist and relationship counselor. She married the love of her life, Fred Westheimer (he died in 1997) and had another child. She worked long hours for Planned Parenthood in Harlem in the 1960s while Fred shared in the household and childcare duties. “I really believe I would not have been a good mother if I didn’t have some academic interests and a job,” she says in the film.

Westheimer became a TV sensation by accident, but it was as if she was born to it. A New York radio call-in show in 1980 proved so popular it quickly became syndicated, and led to a television talk show, numerous guest appearances, and worldwide fame. Viewers responded to Dr. Ruth’s frank answers and nonjudgemental approach, delivered with her grandmotherly twinkle, to taboo topics. The film reminds viewers that, during the early years of the AIDS epidemic, Westheimer was vocal about countering hysteria about the disease with factual information.

Like last year’s hit RBG about Ruth Bader Ginsburg, Ask Dr. Ruth is both history lesson and life lesson. It’s a revealing look at an accomplished woman whose story is far more complex and compelling than anyone could have imagined.