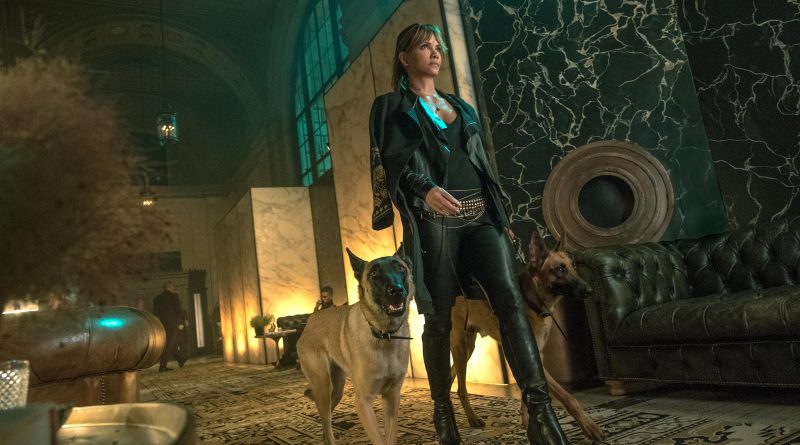 The opening scene of Chapter 3 in New York City’s iconic Public library is pure fantasy and entertainment, as not only does Super Assassin John Wick kill a perpetrator with a book, he respectably takes the time to place the book exactly back in its rightful place on the bookshelf. By setting the tone early, we reconcile into a fictional world, this by no means diminishes the violence, although it’s easier to shrug off as non-realistic.

Keanu Reeves’s antihero third installment picks up right where he left off in Chapter 2, at nighttime during a New York City torrential downpour—a neon-noir backdrop of reflective street puddles. In a noticeable limp, while running, John Wick is on the run, his dog by his side. He’s deemed “excommunicado” by Winston (Ian McShane) for killing an Italian member of an international assassin hub, a $14 million bounty is on his head and every assassin in New York City, if not the world, is after him. The next two hours of Parabellum (meaning “prepare for war”) are exactly that, all out violent ‘shoot to kill’ war—in every imaginable way the numerous screenwriters, (Derek Kolstad, Chris Collins, Marc Abrams, and Shay Hatten) can dream up.

You know precisely what you’re in for by now as the John Wick action movie franchise is based on stylized kills, dry humor, dogs, gratuitous violence, and thin dialogue. After viewing Chapter 3, I can tell you that the brilliant addition of Halle Berry’s character (Sofia) is a welcome breath of fresh air. Wick seeks her out by traveling to Casablanca as he hopes she can get him in contact with her old boss that can lift his bounty. Sofia is a force to be reckoned with; she’s feisty, self-assured, demanding, and alluring. Berry’s scenes with Reeves are intriguing, she draws you in, and we are mesmerized, she can fight toe-to-toe, and thankfully we view her in full combat mode. And how could I not mention her two side-kick dogs, trained to kill Belgian Malinois’, that go directly for the—you guessed it, crotch.

The Bowery King (Laurence Fishburne) an old ally, can give some council, but can’t be trusted. The Adjudicator, the chancellor of the High Table (Asia Kate Dillon) of Billions is determined to make those who have helped Wick pay, while one assassin, Zero (Mark Dacascos) is exceedingly obsessed with defeating Wick, the legend.

To truly enjoy viewing the film, looking at the aesthetic style heightens the story. Yes, we all know that in the real world one man could barely survive days let alone a few minutes against what’s typically thrown at John Wick. What’s fun is the classic wardrobe of suits, shirts, and ties, and basically how Wick will ingeniously employ a weapon. Here, he rides a horse and uses those strong bucking back legs as weapons—apparently nothing is off limits.

I also caught my mind drifting several times to flashbacks of the 1982 Bladerunner set, that film noir setting, dark, dreary, yet flashy. In a chase scene between Zero and Wick they take a break inside the Continental, Zero expresses how happy he is to meet the legendary Wick and says, “If I didn’t have to kill you we’d be pals.” Both assassins stop to express the same sense of honor during another fight later in the film.

Keanu Reeves owns this role; he plays the loner with a textured intensity, delivering raspy one-liners or disappearing into crowds. He’s become an action icon due to the The Matrix films and continues his fictional superman façade in the John Wick franchise.