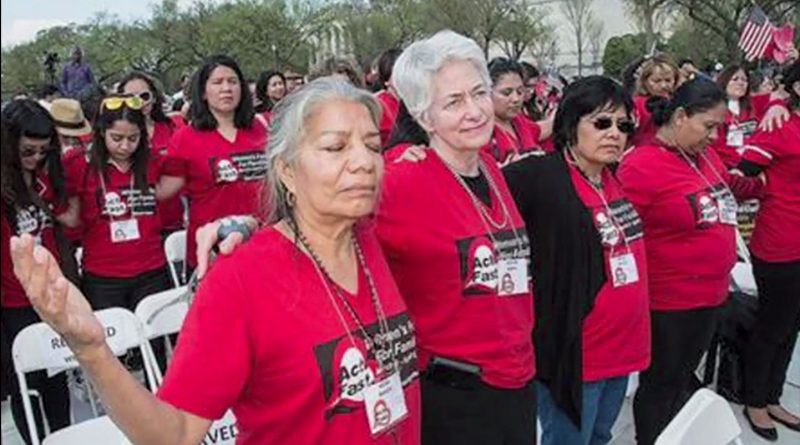 “They said, ‘Elizabeth, if you really want to push for this consumer agency, you’ve got to get organized.’ And I said, ‘Great! How?’ They said, ‘I’ve got two words for you: Heather Booth.’” –Sen. Elizabeth Warren on the subject of the Consumer Financial Protection Bureau

Ever since the results of the 2016 U.S. presidential election became known, people throughout the country and the world have been mobilizing in a resistance to the current regime the likes of which haven’t been seen since the 1960s. The current outrages to human decency that are emanating from Washington, D.C., however, are neither as unprecedented nor as unusual as many newly woke people seem to think. Again we have had to learn that democracy is not a spectator sport.

People who know what community organizing is usually think immediately of the late Saul Alinsky, a Chicago-based educator and activist who wrote Rules for Radicals and is often called the father of community organizing. Or they may picture young community organizer Barack Obama, who we see in a still photograph at the very beginning of Heather Booth: Changing the World knocking on someone’s door. However, although few outside the groups that call on her for help know about Heather Booth, her influence is enormous. One interviewee says: “It’s like Zelig.” Anywhere a progressive cause needs a helping hand, you’re likely to find Heather Booth.

The sheer volume of Booth’s activities would be a challenge to any documentarian, but director Lilly Rivlin takes us through Booth’s life and career economically through the use of Booth’s audio diary, begun in September 2015, and interviews in which Booth recounts her personal history. What emerges is an inspiring portrait of a highly effective activist who has accomplished a great deal in her 70+ years on this planet.

The film starts with a look at the nuts and bolts of organizing, as Heather records in her audio diary the steps she is taking to organize a September 2015 rally on the Mall in Washington, D.C., for a group called Moral Action for Climate Justice. Booth lays out the basics of a successful action: “Clarity of purpose, clarity of the specific tasks, accountability on the tasks, and interconnection on the tasks.” Rivlin films her laying the groundwork for the event and then the successful rally itself. It then segues into a rough chronology of Booth’s life and activities.

Booth was raised in Brooklyn by progressive Jewish parents. When they moved to Long Island, she realized that she did not feel comfortable in a suburban social setting. She spent as much time as she could in the free-wheeling atmosphere of Greenwich Village, taking up the guitar and hanging out with “the beatniks.” It was there that she took her first steps as an activist, handing out flyers for a group opposed to the death penalty, a task that intimidated her. Her own experience informs her approach to activism: “We need to give people confidence to take even simple steps like that.”

She lived on a kibbutz in Israel, but galvanized by news of the 1963 March on Washington, she returned to the United States to be part of the civil rights movement. Among her activities at the time involved going to Mississippi to set up freedom schools and to register voters. Her visit to Shaw, Mississippi, during Freedom Summer put her in touch with the Hawkins family, who eventually sued the city for equal access to services the white side of town enjoyed, such as sewers, traffic lights, and fire hydrants. Booth says that some consider the U.S. Supreme Court decision in favor of Hawkins in Hawkins v. Town of Shaw to be as important as Brown v. Board of Education, which codified equal access to education for white and nonwhite citizens.

She met her husband Paul, then the national secretary of Students for a Democratic Society, in 1966 while both were involved in a sit-in on the University of Chicago campus to protest the war in Vietnam. He proposed on the third day of their acquaintance, and their life together, says Heather, “gets better and better. We work on our marriage the same way as our organizing.” (Paul died in 2018 at the age of 74.) It was inevitable that once the Booths had children, in 1968 and 1969, Heather’s work would turn to the plight of families. She helped organize the Action Committee for Decent Childcare in 1972 that eventually squeezed $1 million from the City of Chicago for childcare services. Her account of how the group accomplished this amazing feat shows her humor, ingenuity, and tenaciousness.

It’s not often commented upon, but the progressive movement was and often still is dominated by men. Booth decided that to help women avoid being marginalized in the movement, she would help found an institute to train more women in community organizing. The Midwest Academy, which she chairs to this day, was the result. Other work on behalf of women included founding the Jane Collective, a service that provided illegal abortions before Roe v. Wade made the procedure legal and widely available. The feature film Ask for Jane, about the collective, features a character named Rose who is loosely based on Booth.

Rivlin’s film, which includes title cards, archival footage, still photos, and talking-head interviews, moves briskly, even breezily, with encouraging news about the wins Heather Booth helped effect, all scored by the infectious Bob Marley-like social justice song by Kyle Casey Chu, “Woman Strong,” that repeats “ain’t nobody gonna stop her now.” Her accomplishments are too numerous to recount here—a very good reason to see this movie and hear people like Sen. Warren and other legislators and community activists sing her praises.

The forces that shaped Booth’s destiny helped her empower others. Booth said that visiting Yad Vashem, the Holocaust museum in Israel, with its monument to the resistance fighters of the Warsaw Ghetto, had a profound effect on her. She says, “This was a place where people stood and fought back—this feeling of better to go down standing up than living on your knees.” Just because you’re paranoid doesn’t mean they’re not out to get you, whoever and wherever they are. A sign on Booth’s desk confirms this idea, but prescribes an attitude that refuses to admit despair: “Pessimism of the mind, optimism of the will.” It’s a good thought to keep in mind for the fight ahead.

Heather Booth: Changing the World is available for online viewing for $2.99 at http://heatherbooththefilm.com. The film is distributed by Women Make Movies.