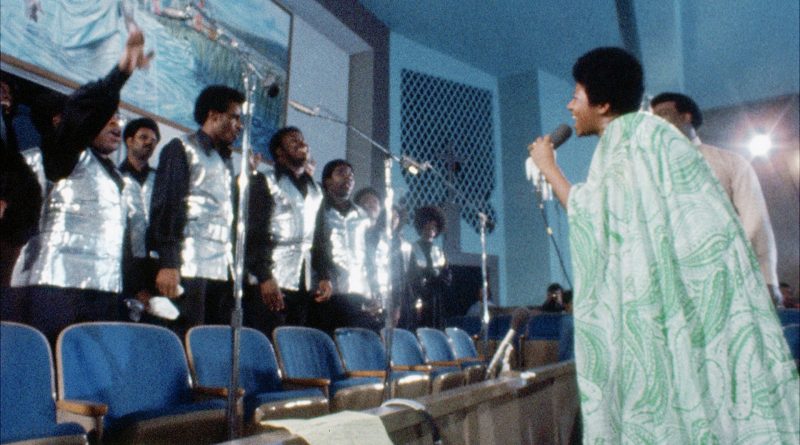 By 1971, the Queen of Soul already had recorded more than 20 albums, won five Grammys and notched 11 straight No. 1 pop and R&B hits, including “Think, “Respect” and “(You Make Me Feel Like) A Natural Woman.”

So, purportedly against the advice of her label, Franklin went back to her roots. In January 1972, she recorded the gospel double-album “Amazing Grace” live over two days at the New Temple Missionary Baptist Church, Los Angeles, accompanied by gospel music guru the Rev. James Cleveland, his Southern California Community Choir and her own band.

The Grammy-winning album became not only Franklin’s best-selling release but also the best-selling live gospel album of all time. Future two-time Oscar winner Sydney Pollack, already an Academy Award nominee for 1969’s “They Shoot Horses, Don’t They?,” had led a film crew at the church in lensing the making of the album during a pair of actual church services.

And that’s where the story gets mysterious: Neither Pollack nor his crew used a clapboard to sync the film with the audio, so their footage couldn’t be edited. When composer Alan Elliot heard about the footage, he embarked on a nearly 30-year odyssey that reportedly involved not just tapping the technical wizardry to fix the technical glitch but also a dispute with Pollack about his vision about the vision for the concert film, which was resolved just before the filmmaker died in 2008, and an enigmatic, decade-long legal effort on Franklin’s behalf to keep the rock documentary from being released.

After Franklin died in August at the age of 76, her family quickly greenlighted the release of “Amazing Grace,” so what once was last now is found – and it is glorious. Through the toils and snares the film has come through, Elliott presents it just as it was filmed, unsullied by the big-name narrator or talking-head interviews most filmmakers would have added to bring star power and context.

Those sorts of additions would have subtracted from the sheer power of Franklin belting the good news as she did growing up in Detroit. Franklin, then only 29, says almost nothing in the course of the 90-minute concert film, allowing Cleveland and choir director James Hamilton to provide the showmanship. She only occasionally even smiles, especially when her father, the Rev. C. L. Franklin, fondly recalls her childhood performances for the congregation and declares “she hadn’t ever left the church.”

But she is clearly in the zone throughout the film, which is a splendid reminder of just how incredible she was as a vocalist. Looking ethereal in a long white gown for the first day of filming, she opens with a goose bump-inducing piano and voice performance of Marvin Gaye’s “Wholy Holy” and takes over the pulpit for “What a Friend We Have in Jesus,” and a mashup of “Precious Lord, Take My Hand” and Carole King’s “You’ve Got a Friend” and “How I Got Over,” the foot-stomper from gospel legend Clara Ward, who turns up for the second night of filming.

Arriving in a striking fur coat and performing in flowing green and white pantsuit, Franklin proves just as stupendous on Day 2 of filming, when she gives life to old hymns like “Precious Memories,” spirituals like “Mary Don’t You Weep” and the religious rave-up “Old Landmark” (rivaling James Brown’s cover of it from the movie “The Blues Brothers”) for a transported audience.

But the film’s highlight is the title track, as Franklin delivers a more than 10-minute soul-stirring rendition that causes Cleveland to burst into tears and huddle in a pew to compose himself.

Depending on the raw footage means accepting certain flaws, from unfocused shots to wandering crew members, but they only add to the considerable charm of feeling like you’re right there when Franklin’s father mops the sweat from her brow, when Rolling Stones frontman Mick Jagger starts a standing ovation for her in the crowd, and when Cleveland throws a handkerchief in amazement and accidentally hits a camera. Who can blame him?

The level of talent and feeling Franklin exhibits are mysteries no music fan, especially one of faith, should try to solve, only to savor.