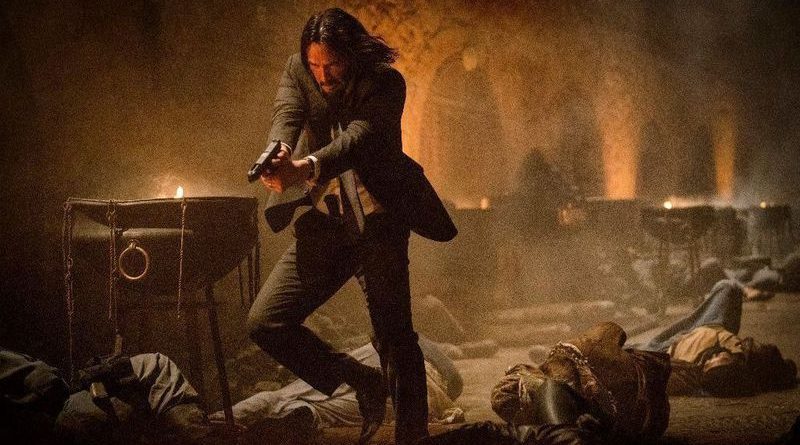 In case you forgot, in the original film, Wick was mourning the death of his wife Helen (Bridget Moynahan) when his beagle puppy, a posthumous gift from Helen, was murdered. Revenge became the name of his sociopathic game.

Beginning where Chapter 2 ended, Wick is racing through midtown Manhattan with less than an hour to prevent his being made “excommunicado” by The High Table, a top-secret, international assassin syndicate, because he broke the Prime Directive by killing an enemy on the premises of the Hotel Continental, a supposed safe-space, run by imperious Winston (Ian McShane).

With a $14 million contract on his head, every killer in New York seems to be after him: a giant corners him in the stacks of the New York Public Library, then more self-defense in an antiques store, Grand Central Terminal, and astride a horse riding down a busy road under a Brooklyn El train.

As Wick seeks sanctuary in the Tartovsky Theatre, The Director (Anjelica Huston), who trains ballerina/assassins, declares, “Art is pain!”

So it’s off to Casablanca, as taciturn Wick meets up with a formidable femme fatale, Sofia (Halle Barre), and her two snarling, ferociously obedient Belgian Malinois who decimate his Moroccan pursuers. Then there’s The Adjudicator (Asia Kate Dillon), the Bowery King (Laurence Fishburne), and a street-stall sushi-chef/ninja named Zero (Mark Dacasos).

On the Granger Movie Gauge of 1 to 10, John Wick: Chapter 3 – Parabellum is an exaggerated, escapist 6, a silly, super-macho threequel filled with ultra-violent action.