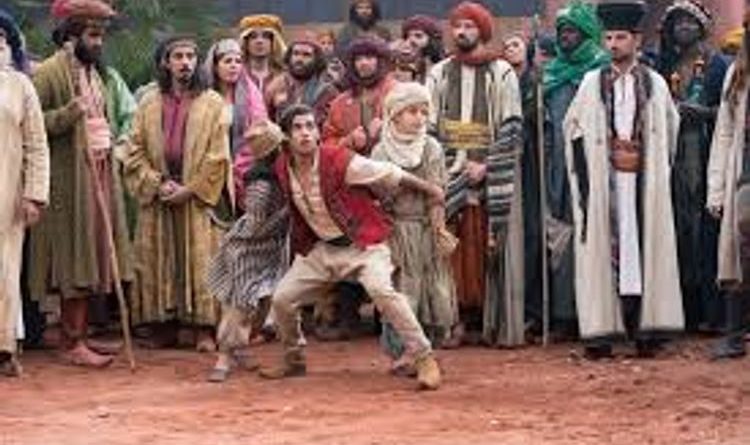 Disney’s live-action remake of its 1992 animated classic stars Will Smith, first as a mariner/storytelling father and then as the jovial, blue-skinned Genii released from the lamp.

In the fabled Middle Eastern kingdom of Agrabah, thieving Aladdin (Mena Massoud) – with his mischievous monkey Abu perched on his shoulder – nimbly lifts dates from a marketplace vendor and steals a bracelet belonging to Princess Jasmine (Naomi Scott), who’s incognito, spending time among the people of her city.

Thinking she’s the Princess’s handmaiden, Aladdin returns Jasmine’s bracelet, and these two attractive young people definitely connect. But the princess must marry a prince, not a pauper.

In possession of a magic carpet, along with the Lamp, Aladdin summons the CG-enhanced Genii, who explains the three wishes. Aladdin’s first wish is to become Prince Ali so he can properly pursue Princess Jasmine with the Genii as his wise-cracking wingman.

From there, it’s scrappy fun and games, peppered with familiar Alan Mencken/Howard Ashman-Tim Rice music: “Friend Like Me,” “Arabian Nights,” “A Whole New World.” Plus the new song “Speechless” by Benj Pasek and Justin Paul (La La Land) in which empowered Jasmine asserts her independence.

“It’s inspired by something that was really hidden for us in the original animated movie,” notes Pasek, referring to Jafar’s observation that Jasmine says little, noting, “You’re speechless, I see – a fine quality in a wife.”

“That’s very dismissive, misogynistic,” Pasek says. “So the inspiration was waiting for us.”

On the Granger Movie Gauge of 1 to 10, Aladdin” conjures up a refreshing, splendidly shimmering 7, not Disney’s best but an entertaining interlude destined to become a new Adventureland ride.