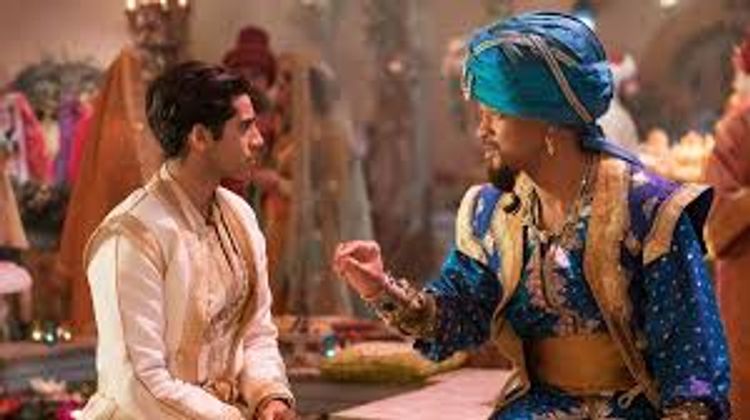 Disney’s recycling of their animated classic films is fine with me, especially if an updated script showcases noteworthy performances—sadly, for all the spot-on ethnic casting, and memorable performances by Jasmine, Naomi Scott and the charming Mena Massoud as Aladdin—Guy Ritchie’s error of changing the script to include torturing the Sultan doesn’t belong in a children’s film. Yes, shockingly torture occurs in the last quarter of the film, of which will be discussed later in the review. This storyline is unnecessary, as the original does not have a hint of torture unless you count the constant mistreatment of Lago the parrot assistant voiced by Gilbert Gottfried at the hands of Jafar.

In looking back at Guy Ritchie’s films of which, five of the nine are rated R, and yes, I’ve seen them all. His signature artistic stop-motion style, with a loud rock and roll score in the Sherlock Holmes (PG-13) films include some of my favorite action-movie scenes. The majority of his past R rated films center on ‘criminal low-lives’ that whack each other around as rock music blares in the background, Lock, Stock and Two Smoking Barrels (1998), Snatch (2000) Revolver (2005) RocknRolla (2008) are a few examples.

Aladdin has other misfires in that it’s 40 minutes longer than the original, has a much too lengthy dark, violent tone for a children’s film, the dance scenes aren’t fresh, (they feel like those in a Step Up movie), and Will Smith’s Genie is actually kind of creepy looking as the CGI smoke of the bottom half of his body looks weird.

For the good news, Egyptian-born (Cairo) actor (Mena Massoud) Aladdin, raised in Toronto’s role of self-discovery is the backbone of the story; he’s relatable, charming and believable in the part. Aladdin is a good-hearted person that feels he’ll never measure up despite his natural connection to Jasmine early in the film, through Massoud’s likable performance we easily root for him.

Jasmine, (Naomi Scott) Power Rangers (2017), a singer/actress of South Asian descent grew up in London, as a child she related to Jasmine through the animated 1992 movie. Arranged marriages are common in Jasmine’s world and sometimes occur between countries as a way of forming alliances, and in the 2019 film, Jasmine’s deceased mother comes from the South Asian kingdom of Shehrabad, so Jasmine is half South Asian and half Arab. It’s heartwarming to see her mother’s influence in her clothing, which is inspired by South Asian design. Jasmine, written to be strong-willed, and independent also has her sites on inheriting the thrown.

Most know the story, a Princess must marry a Prince; especially not a ‘street rat’ as Aladdin and the evil Sultan advisor, Jafar, who will stop at nothing to be Sultan, with the addition of a Genie who can grant only three wishes to a person, but most of all longs to be free of the magic lamp.

The wardrobe design by Michael Wilkinson is a celebration of Arabic culture, in researching he studied the clothing, art, and sculpture of the Middle East region, and the book, “One Thousand and One Nights.” The fictional port city in Aladdin, Agrabah is located on the Silk Road, where the East and West meet to trade, Wilkinson also studied references from Africa, Turkey, and Pakistan. The wardrobe is stunning, look for future awards nods.

It’s a shame, with the lavish sets, costumes, and talented actors that Aladdin’s script doesn’t develop the characters and the last forty minutes took a dark tone that lingered for too much time in a children’s film. Unfortunately, the numerous problems doom the film. Should your children see the movie? That depends if you’re okay with Jasmine’s dad the Sultan being tortured by electric shock bolts that inflict pain until she agrees to marry Jafar. Frankly speaking, the movie as a whole has some great songs, with dizzyingly fun flying carpet rides and sweet romantic moments that are absolutely fine for kids. The main objection is Disney’s blatant use of torture when it wasn’t needed in the film.

The Bottom-line: Guy Ritchie’s Aladdin remake introduces kids to new methods to ‘get their way’ by torturing Jasmine’s dad, the Sultan—this will never be ‘okay’ in a children’s movie.