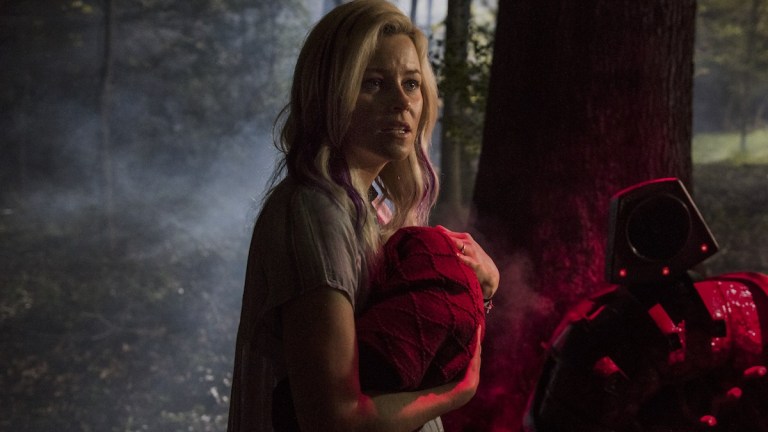 Since superhero origin stories and subversive horror movies dominate the box-office, it’s not surprising that someone came up with a clever premise that combines both genres.

About a dozen years ago in the rural town of Brightburn, Kansas, a childless couple – Tori (Elizabeth Banks) and Kyle (David Denman) Breyer – realize a meteor has crashed on their farm. Aboard is a healthy baby boy – a heaven-sent answer to their prayers.

Naming him Brandon, they tell people he’s that he’s adopted. Now, as Brandon (Jackson A. Dunn) approaches puberty, strange things seem to be happening to him.

While helping his dad with chores, when he accidentally throws a lawnmower 100 yards across a field, Brandon smugly realizes, “I’m special.”

So he decides to stalk a pretty classmate, Caitlyn (Emmie Hunter), who once sympathized with him when he was teased for being so smart. Putting it mildly, Caitlyn is not pleased. Indeed. She calls him a pervert, dropping him during a ‘trust fall’ exercise in gym. So Brandon crushes the bones in her hand after she’s forced to help him up.

Brandon soon becomes defiant, manipulative and, eventually, homicidal, wearing a cape fashioned out of the blanket he was wrapped in as a baby. Is it all somehow, inexplicably, connected to that malevolent space pod, vibrating and glowing in a locked cellar in the barn?

Director David Yarovesky (The Hive) turns Superman into the Bad Seed – on a thrifty $6 million budget – under the supervision of producer James Gunn (Guardians of the Galaxy), whose brother Brian Gunn and cousin Mark Gunn wrote the warped, formulaic screenplay, focusing on grisly gore, never delving into the creepy concept of an evil superhero, capable of mass destruction.

Brightburn was originally scheduled for release last November but scuttled after Disney fired James Gunn and cancelled his appearance at San Diego’s Comic-Con.

On the Granger Movie Gauge of 1 to 10, Brightburn is a fright flick 4 – with a sinister end credits sequence that signals a sequel is in the works.