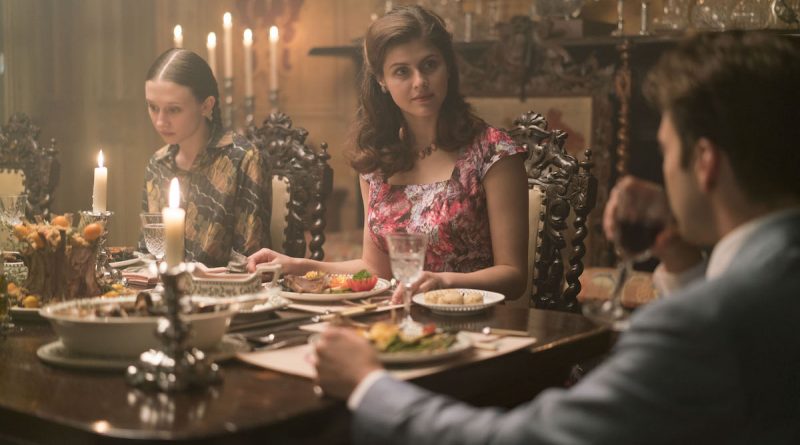 It’s summer, yes, but don’t we all have time for a good gothic yarn? We Have Always Lived in the Castle might be the perfect recalibration to bring nihilistic ennui into your summer time fun….

Sisters Merricat (Taissa Farmiga) and Constance (Alexandra Daddario) Blackwood live with their wheelchair-bound and brain-addled uncle Julian (Crispin Glover) in an isolated mansion, where six years before, their parents were murdered with arsenic-laced sugar. Constance, now an agoraphobe, hasn’t left the house since being acquitted for the killings. The nearby townspeople believe Constance has gotten away with murder, which only exacerbates their longstanding resentment towards the wealthy family. Long suffering yet stoic Merricat is sent into town each week for groceries and library books, where she is treated to nearly constant hostile jeers and teasing. In an effort to keep her sister safe, Merricat creates spells and practices what she thinks is magic, burying items all over the grounds of their sprawling estate. When their cousin Charles (Sebastian Stan) shows up unbidden, and begins to form a relationship with Constance, the dynamic of this eccentric family shifts, putting their future, loyalties, and what little sanity they have between them at risk.

We Have Always Lived in the Castle is based on the last novel released by writer Shirley Jackson, during her short lifetime. Time magazine called it one of the best novels of 1962. Her short story The Lottery, when it originally published in The New Yorker in 1948, generated hate mail and cancelled subscriptions for the magazine. There’s no question that all her work, including We Have Always Lived in the Castle, was suffused with a subversive feminism, and that transfers onto the screen, thank goddess, although it is a feminism born out of want and lack of agency.

Shirley Jackson’s literary critic husband was a philanderer and controlled all their money, and she got little respect as a writer from those around her, despite the acclaim that The Lottery and other examples of her writing brought her. She offered themes of ‘otherness’ and evil in everyday life in some form in all her stories and novels, and it would be hard for screenwriter Mark Kruger not to bring those themes, intact, into the first screen adaptation of Jackson’s story.

The actors interact surprisingly well, given that all their characters are driven by inner dialogues, as well as demons…which the audience may suspect are lurking inside them, but only get a fleeting glimpse of, as they circle around each other. How the actors play against their silent suspicions and yearnings is what will keep the audience most engaged with the proceedings.

Liking or not liking the characters becomes immaterial, which is just as well, because this is one looney, tightly-coiled bunch, and director Stacie Passon buoys up what the writing and acting do to create very complicated people, each who might be more angel or more devil, more victim or more perpetrator.

The most interesting aspect of the story, as it relates to feminism, is the motif of witchery, and how it is used from the inside, and seen from the outside. Women in this era still have little control over their own destiny, and in this case Merricat works with witchcraft and Constance uses order and domestic rituals to try to give themselves a bit more control. These women are also seen not only as ‘other’, but as dangerous, with the men around them attempting to make all the decisions for them. It is in their sisterhood, both literal and spiritual, that they find the most safety. There are elements of the story that include fire which might burn them, people around them who condemn them out of their own fear, and even gifts given as offerings of appeasement, all of which recall the mythology of witchcraft. After all, many women of power, or misunderstood women in history, have been declared by the general populous as not only “other”, but a threat to all they hold dear…

Merricat’s spell casting and Constance’s tidying and benevolent smiles are in reaction to their suppressed rage and feelings of powerlessness. This makes a moment where Merricat confronts the singsong taunts of children by standing silent and fearless at the front door particularly compelling.

It is good, too, that neither Charles the character, nor Sebastian Stan, the actor that plays him, telegraph their intentions. No one in this story is without sin, or fully altruistic, but audiences are not spoon-fed whom they should rally behind or wish ill. How delightful that we all get to decide for ourselves who to cheer for, if anyone.

As a film that trundles along, subtly getting under your skin, and making you consider what you would do for the ones you love, We Have Always Lived in the Castle is a worthy conversation-starter. It will also serve to make nearly everyone grateful for the family they live with, so egregious is the one portrayed onscreen.