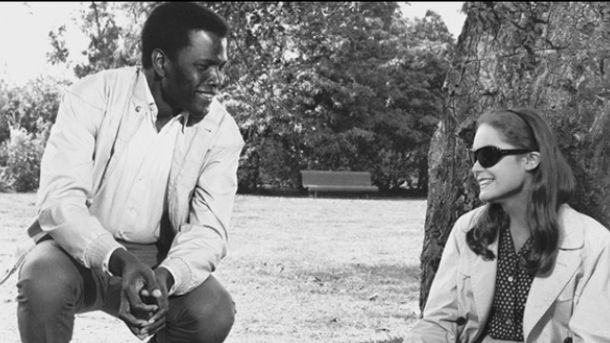 I clearly remember seeing this intimate drama when I was in grade school in the mid-‘60s at the height of the civil rights movement. It taught me a lesson about what the saying “Love is blind” really means as an 18-year-old sightless illiterate white girl named Selina, who has been sheltered and abused all her life by her trashy witch of a mother, encounters a kind office worker named Gordon in a New York City park. He gives her joy and confidence. She gives him a purpose beyond his night job.

They form a beautiful bond as they open up each other’s world while symbolizing the meaning of tolerance. Rather than being preachy or soapy, Elizabeth Hartman in her Oscar-nominated screen debut and Sidney Poitier make us root for both of them despite the odds. Also, you can’t beat Shelley Winters at her blowsiest. She handily won a second supporting Oscar as mama Rose-Ann, who makes a living as a prostitute.

Interestingly enough, the director of the film, Guy Green, was British. He could have made the film in color but wisely decided it would be more appropriate in black and white. The scenes of the two leads kissing were originally cut when the film was shown in the South but were intact in the DVD version.