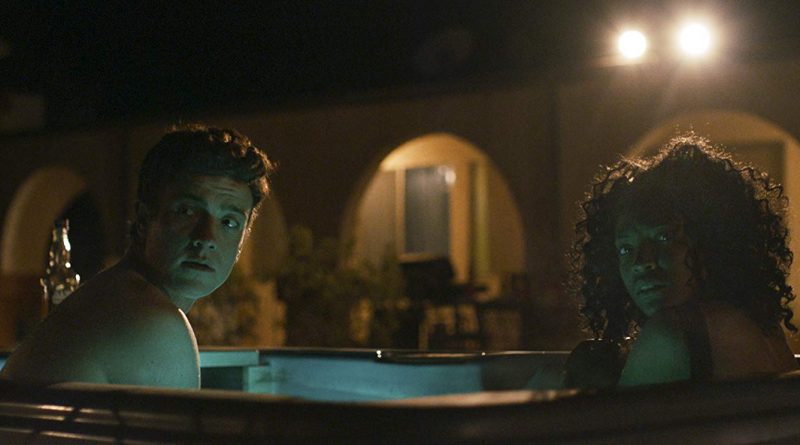 On the surface Head Count looks like countless other horror movies: a group of college kids rent a house in the desert for the weekend and before the holidays are over, a bunch of them are dead. We’ve seen it before and we’ll certainly see it again but what makes writer/director Elle Callahan’s feature film debut interesting is that she’s far more interested in establishing a mood and tone while the scares feel almost secondary.

Co-written by Callahan and Michael Nader, the opening 20 of the movie’s 90 minute running time is spent setting up and introducing the people, place and relationships before anything of note happens. Callahan takes time acquainting us to the location, an isolated home on the outskirts of the Joshua Tree desert, which provides a beautiful backdrop, often in twilight or at night (pitch black that far from anything else), for the creepiness that is about to unfold. The key word here is creepy.

Callahan brings years of experience in various departments, everything from sound design and camera operation to VFX and editing, to the film and she uses her full arsenal to build great tension. A camera lingering on a scene or moment a little longer than expected, a bit of music (fantastic score from Hannah Parrott) or a sound that feels out of place, a movement at the edge of the frame that may or may not have been there. Callahan incorporates them all and Head Count is a better movie for them; overcoming the familiar tropes of the genre to deliver something which is a little more interesting than most.

While most of the movie’s staying power comes from its production prowess, Head Count also doesn’t lack compelling leads and while Isaac Jay does well in the role of outsider and is, for all intents and purposes, the movie’s protagonist, it’s Ashleigh Morghan, who plays his love interest, that really stands out.

Head Count is likely to disappoint viewers looking for a horror movie since the scares are few and far between and while it mostly sidesteps horror tropes and expectations, it does devolve into a bit of schlocky mess in the third act which plays out exactly as you might expect from a movie in which teens are scared, don’t know what’s going on and make one stupid mistake after another.

Sure, the ending turns into a mess but it doesn’t detract from the fact that for the most part, Head Count is a solid thriller and that Callahan shows not only a great eye for directing but also great talent for pacing and editing. It will be interesting to see what she delivers next.