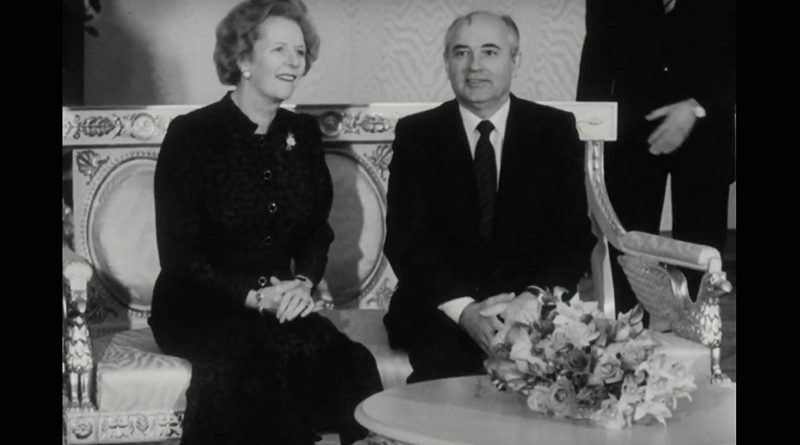 At first glance, the fairly conventional, nearly fawning “Meeting Gorbachev” seems like an odd project for iconic filmmaker Werner Herzog, who is revered for his incisive documentaries and biopics that go to astounding lengths to be visually exceptional, and not necessarily for talking-head presentations about political figures.

On the other hand, Mikhail Gorbachev — the eighth and final president of the Soviet Union, whose efforts to reform the USSR led to its collapse and his own political downfall – seems like much the kind of tragic figure Herzog has profiled in his past films like 1982’s “Fitzcarraldo” and 2005’s “Grizzly Man.”

For the German filmmaker, “Meeting Gorbachev” also is an unabashed labor of love, as he even states plainly, on behalf of his countrymen, “We love you. I love you in particular, because reunification for me personally was important.” So, it’s important to take the documentary with a grain of salt, to offset the box of custom-made sugar-free chocolates Herzog and co-director Andre Singer grandly present Gorbachev (whose health ailments include diabetes) for his 87th birthday.

The film chronicles Gorbachev’s bitterly poor upbringing in a remote part of the North Caucasus (“It is hard to imagine that from such a godforsaken place in the middle of nowhere, one of the greatest leaders of the 20th century emerged,” Herzog lionizes in one of his familiar voiceovers), his agricultural and academic prowess and his rise through the ranks of the Communist Party. The deaths in rapid succession of feeble Soviet leaders Leonid Brezhnev, Yuri Andropov and Konstantin Chernenko – Herzog, who managed to get his hands on some incredible arcane footage, plays the series of state funerals for dark comedy – lead up to Gorbachev taking power in his 1985.

Naturally, the film covers his introduction of the concepts of perestroika (“restructuring”) and glasnost (“openness”), his work with U.S. President Ronald Reagan toward nuclear disarmament, and his refusal to stop a wave of revolutions across Eastern Europe that culminated in the fall of the Berlin Wall – a series of changes that developed so rapidly they soon left Gorbachev with no USSR to rule.

But Herzog’s three interviews over about six months with Gorbachev form the core of the film, for better or worse, as the documentarian lobs too many softballs and, perhaps inhibited by the language barrier and need for translators, doesn’t do enough interjecting and following up on key lines of questioning, like the Chernobyl disaster.

Some of the movie’s most compelling moments come when Gorbachev speaks out against the modernization of U.S. and Russian nuclear arsenals, but the filmmaker fails to mine more of his insights into current political affairs. While Herzog is focused on finding out that Gorbachev continues to mourn the death of his beloved wife, Raisa – hardly a bombshell revelation – the film’s lone image of Vladmir Putin flashes briefly during footage of her funeral.

Although Herzog’s interviews occasionally yield some interesting tidbits – when he posits that the first Germans Gorbachev ever met probably wanted to kill him, the former statesman replies with an charming story of patronizing a German baker when he was a child and determining that anyone who could bake such wonderful gingerbread couldn’t be bad – it feels like the juiciest morsels that could have been plucked from these meetings are left on the vine.