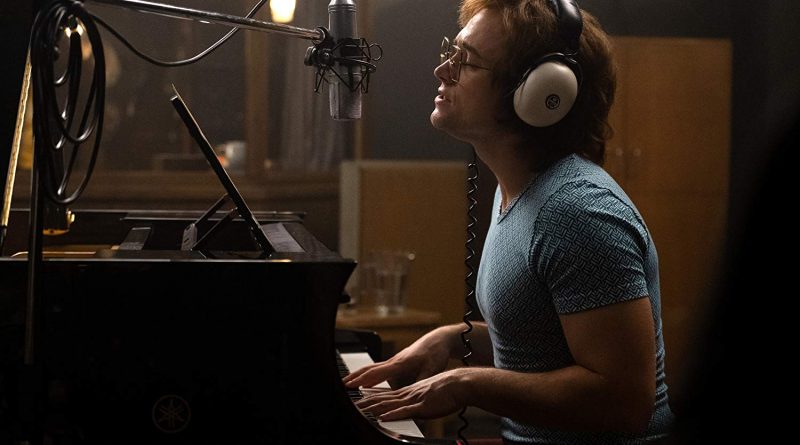 But as a campy musical – one that’s probably destined for Broadway – it’s ambitious – with 20 familiar songs, cleverly interwoven to cleverly depict significant sequences in the life of Reginald Kenneth Dwight, a pudgy musical protégé from suburban Middlesex, England.

Mixing fantasy with R-rated reality, it begins in 1990 in rehab, where Elton (Taron Egerton) is struggling to come to grips with his self-absorbed mother, militaristic father and love-deprived childhood, along with repressed sexual orientation at a time when “homosexual” was a still a whispered word.

“I’m an alcoholic, a cocaine addict, a sex addict, a bulimic and a shopaholic,” he confesses. And the rest of the film serves to illustrate all of that. Nothing is sanitized, but it is somewhat romanticized.

Problem is: while Elton John wrote the music, Bernie Taupin wrote the lyrics. And Fletcher uses Taupin’s lyrics to illustrate Elton’s emotional journey and why could never really love himself. That’s confusing.

Taron means ‘thunder’ in Welsh, and Egerton delivers a convincing, powerhouse performance, singing every song. Coincidentally, when he auditioned for the Royal Academy of Dramatic Arts in London many years ago, he sang Elton John’s “Your Song.”

At his side as Bernie Taupin, Jamie Bell is intelligently intense and poignant as Elton’s “true brother”/collaborator. Completing the ensemble, Bryce Dallas Howard, Gemma Jones, Steven Mackintosh and Richard Madden are equally impressive, as is costume designer Julian Day.

Fact-checking: while he took ‘Elton’ from his Bluesology bandmate Elton Dean, he did not choose ‘John’ from John Lennon; instead it came from his mentor Long John Baldry. And he didn’t flee from a Madison Square Garden concert to go into rehab dressed as a horned demon.

On the Granger Movie Gauge of 1 to 10, “Rocketman” is an extravagant, excessive 8. Sparkly fun.