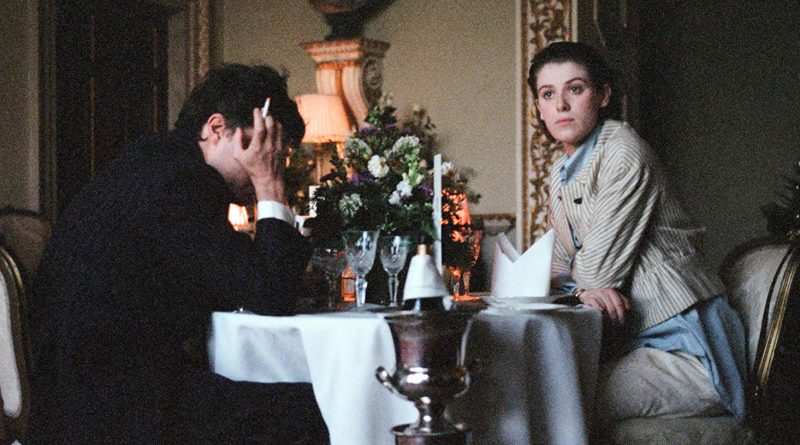 The Souvenir offers an important story but lacks energy.

Some stories are important to tell but boring in their unfolding. That’s how I felt watching Joanna Hogg’s The Souvenir. In it, part-time photographer and aspiring filmmaker Julie falls under the spell of ne’er-do-well, heroin addict Anthony. She’s from wealth, lives in posh Knightsbridge, London; he’s a leech who says he works for the Foreign Office.

As twenty-four-year-old Julie succumbs to Anthony’s manipulative designs, she increasingly loses herself to his domination. Appallingly, she even apologizes when, upon one occasion, she does object to something Anthony has done—no spoilers here. While Anthony’s psychological and emotional control proves thoroughly convincing, it is dull in its understated presentation, with the couple’s exchanges tedious despite their psychological honesty; that is, Anthony’s attention to Julie insidiously ensnares her in his world, subtly slithering into her psyche. Autobiographical for writer/director Hogg, as described in a profile in the May 20 New Yorker, I wanted this recognizable surrender to both alarm and provoke. Instead it sinks into monotonous moments.

As Julie, Honor Swinton Byrne (daughter of Tilda Swinton who plays a supporting role as her mother here) and Tom Burke as Anthony lack chemistry and energy. Technically Hogg seems as tentative as film student Julie awkwardly staging scenes. In addition, several times the music comes as a jolt, clashing with the overall tone. Cinematically, the long shots discourage empathetic identification, and the heavy-handed metaphors are sophomoric: Julie out of sharp focus before mirrors, one shattered; claustrophobic framing, Anthony’s preference for opera versus Julie’s for popular 1980s music. Comments are equally obvious. Anthony tells Julie, “You’re lost and will always be lost,” after commenting on her fragility.

To its credit and to be fair, The Souvenir, the title from that of Jean-Honoré Fragonard’s painting, never wavers from presenting the devious ways abusers so expertly manipulate their victims. There’s a Souvenir: Part II coming, and I optimistically hope Julie will discover and assert her own worth to fashion a gratifying life without Anthony.