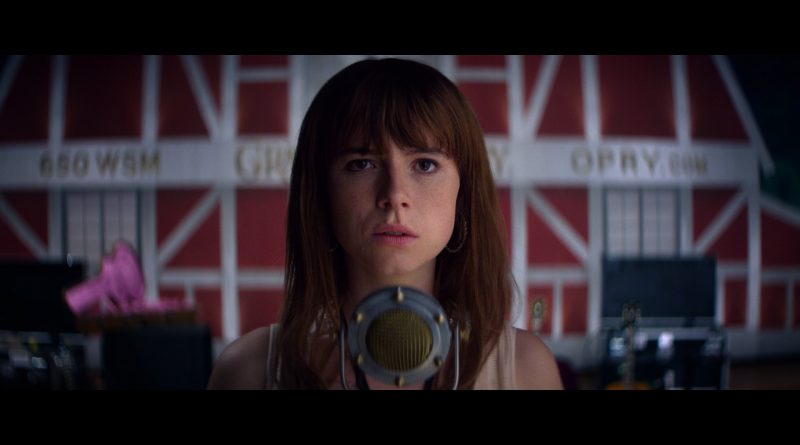 At what point do you give up on a dream? Films about aspiring musicians almost universally consider this question, mostly from a male point of view: Walk the Line, 8 Mile, Almost Famous, Inside Llewyn Davis. Movies about the female experience either skew juvenile (Josie and the Pussycats) or are thoroughly mocked (Crossroads), and it’s arguable whether the latest extremely successful version of A Star is Born provided enough autonomy to the character played by Lady Gaga. Into this landscape arrives Wild Rose, a movie that follows a recognizable narrative flow but features a strong performance from Jessie Buckley as a Scottish woman struggling to break into a musical genre that isn’t her country’s own.

Buckley (whose career began as the second-place finalist of a British talent show I’d Do Anything and in the 11 years since has included theater, TV, and film) shows off her singing skills in Wild Rose, in which she plays Rose-Lynn Harlan, a 20-something woman obsessed with country music. Not “country and western,” she corrects people, but just “country.” She wears cowboy boots and embroidered shirts, she drinks and parties often, she has the words “Three chords and the truth” tattooed on her forearm, and no one in her family—her long-suffering mother Marion (Julie Walters) or her two young children—understand the appeal.

But Rose-Lynn has devoted her life to the genre; even while in prison, she hung up a map of Nashville, with a picture of the Grand Ole Opry, and dreamed of playing there one day. What is curious, though, is how much Rose-Lynn has aspired to a musical career without preparing for one. She doesn’t play an instrument. She doesn’t write her own music. And when talking about her dream with her new boss, Susannah (Sophie Okonedo), she leaves out major life details, like her 12 months behind bars or her daughter and son. There is an image of herself that Rose-Lynn is trying to project, the kind of woman who could make it as a singer in Nashville, and the reality of her situation, which is very different.

Whether Rose-Lynn can find a middle ground between the fantasy world she doesn’t seem to be trying very hard to reach, and the reality in which she is noticeably disinterested, is the question director Tom Harper and writer Nicole Taylor consider. To do so, they face off Rose-Lynn with varying characters who have different expectations for her—Marion, who wants her to take responsibility for her children; Susannah, who wants to use her wealth and connections to provide assistance—and parse out Rose-Lynn’s motivations within those relationships.

The problem with that, though, is that it takes the film a while to let Rose-Lynn make decisions for herself and to demonstrate who she is on her own terms. Buckley and Walters in particular work well together—Marion’s character goes through the well-known arc of skeptical mother to accepting one, but Walters moves easily between warmth and disappointment—and the film feels very intentional in its choice to diminish the role of men in Rose-Lynn’s life. Her interest isn’t in romantic love, but alternately on her individuality or her motherhood, and the movie’s tight focus on that maintains solid pacing.

Harper adds some visual flourish during a scene when Rose-Lynn vacuums Susannah’s house and sings along to her music; as she moves, various musicians appear in the background, playing for her as she jams her heart out. When we hear her sing properly for the first time, she is bathed in golden light. There’s no doubt this movie will allow Rose-Lynn to succeed in some way (which is why the obstacles Taylor builds into the script sometimes feel particularly hackneyed, like a stolen purse or a sick child), and like so many other films in this genre, there is a certain anticlimactic feel to the ending. But Buckley is magnetic, and how the script unveils aspects of her history that we may not anticipate is smartly done, and the movie appropriately pays homage to country classics like Dolly Parton, Johnny Cash, and Darrell Scott; there’s never a sense that this genre choice is a gimmick. Wild Rose is never particularly surprising, but it’s a familiar story renewed in a satisfyingly female-focused way.