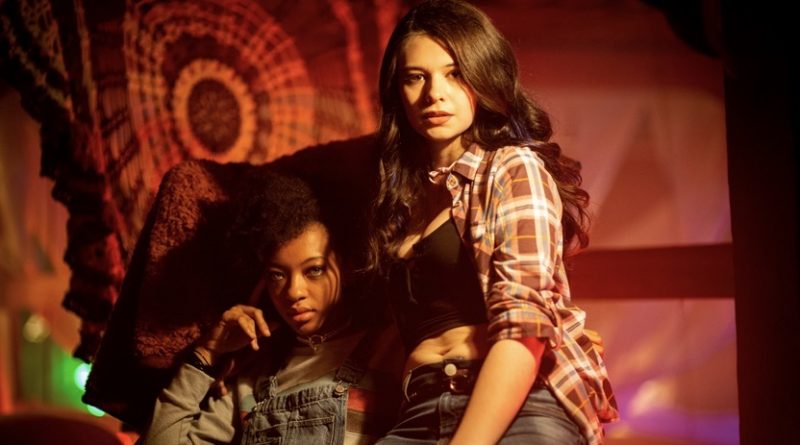 The moment Nicole Maines first hit the news through the landmark human rights decision in the Doe v. Clenchy anti-discrimination case in the Maine Supreme Judicial Court in 2013, there was a strong indication that she would succeed at whatever she put her mind to. The good news for those of us with a desperate hunger for fresh young talent in film and television is that what she’s put her mind to is acting.

After playing a transgender teenager in an episode of Royal Pains in 2015, Maines’ mainstream breakthrough as Nia Nal on the recent fourth series of The CW’s Supergirl series made her the first transgender superhero on TV. Most recently, Maines has starred in Brad Michael Elmore’s Bit, a queer feminist teen vampire movie that has recently premiered at Toronto’s LGBT Inside Out Film Festival, with more festivals no doubt soon to follow suit once word starts spreading about this extraordinary and wholly original horror movie.

Bit follows Maines’ character Laurel, a young transgender woman who moves to Los Angeles from her small town in Oregon after graduating high school to live with her brother Mark (James Paxton) where, following the advice of her parents, she’s to live a little and find her place in the big wide world. That place comes as a surprise to her as much as us, a casual sexual encounter with Izzy (Zolee Griggs) on her first night in town resulting not just in Laurel becoming a vampire, but being taken under the wing of feminist activist vampire girl-gang leader supreme Duke (played furious wild-child perfection by Diana Hopper).

Understandably shell-shocked by this unexpected glitch in how she saw her life (and afterlife) panning out, Laurel finds herself wholly immersed in her new life with her men-hating vampire posse, increasingly losing touch with both Mark and her best friend, the sweet yet insecure gay Andy (Matt Pierce). While Laurel and her new friends revel in their nocturnal party-girl, patriarchy-fighting blood-soaked hijinks, Laurel is continuously reminded that it’s far from a free-for-all. There are rules, the most important one of which Duke announces from the outset: “No. Fucking. Boys”.

Duke’s theory – which ultimately lies at the heart of the film both narratively and thematically – is that history itself has proven that men simply cannot be trusted with power; they abuse it, and more often or not that results in the unrelenting and unapologetic oppression of women. Add to this equation a dark secret from Duke’s past and both she, Laurel and the other girls in the gang – Izzy, Frog (Char Diaz) and Roya (Friday Chamberlain) – are forced to address the impact of their own gender politics as it manifests through their never-ending search for whom they at least consider to be deserving male prey.

The magic of Bit lies in the fact that despite how deliberately Elmore collapses text and subtext, the film’s themes never overpower just how much of a fun genre ride it is. Bit is a teen vampire film with all the things we love; Flying! Fangs! Hubris-drenched victim selection! The girls themselves are strong, independent and with little tolerance for pretense, yet they are marked by a distinctive style in terms of how they dress and carry themselves. Above all, they make no attempt to hide that as their identity is tied to their status as feminist activists, queers and undead blood-suckers, they are just as much dedicated party girls out for a good time. It’s how these aspects of their lives entwine that provides some of the film’s most memorable moments.

But the heart of the film stems largely from the collaboration between Maines and Elmore, and Bit is every bit as electrifying and fearless as the character whose story it seeks to tell; that she is transgender is but one of the many factors that make her who she is. As demonstrated in his earlier films 2012’s The Wolfman’s Hammer and 2018’s bewilderingly underrated horror treasure Boogeyman Pop, Elmore has established himself as a director whose work is marked as much by a strong and distinct visual style as much as an eloquent screenwriter. He combines highly naturalized dialogue with often fantastic storylines, and as Bit demonstrates once again, Elmore is very much an actor’s director; the performances he draws from his almost always young actors are notable for just how authentic they feel.

Perhaps unavoidably, no review of Bit would be complete without a hat-tip to the how the fact that Laurel is transgender is framed in the film; it’s never ignored, but at the same time it is not mined or exploited for sensationalism at one end of the spectrum, or ‘social issue’ didacticism at the other. Even the most loyal horror devotee would struggle to admit that horror has a complicated history when it comes to the representation of queer characters in film; while they are certainly not invisible, there has been a common (although, importantly, not total) tendency for heteronormativity to necessarily cast queer characters as ‘monstrous’ outsiders. Bit rejects this as emphatically as it does elegantly.

Bit is no hyperactive display of performative wokeness, but rather an urgent yet playful reminder that if cinema is going to talk the talk about diversity and acceptance, then it’s now more than time to walk the walk. Maines sets the screen on fire as Laurel for no other reason than she’s a terrific actor playing a rich, complex role in a fun horror film that refuses to treat its audience like knuckle-dragging regressive mouth-breathers. Those days, suggests Bit, are gone.

Festivals, production companies, critics and film-goers take note: Bit is our wake-up call that the conservative clichés of narrow representation in cinema are past tense. Together, Elmore and Maines have proven taking risks can be fun and meaningful without being preachy or patronizing. Bit is the way forward, and the onus is on us to keep up.