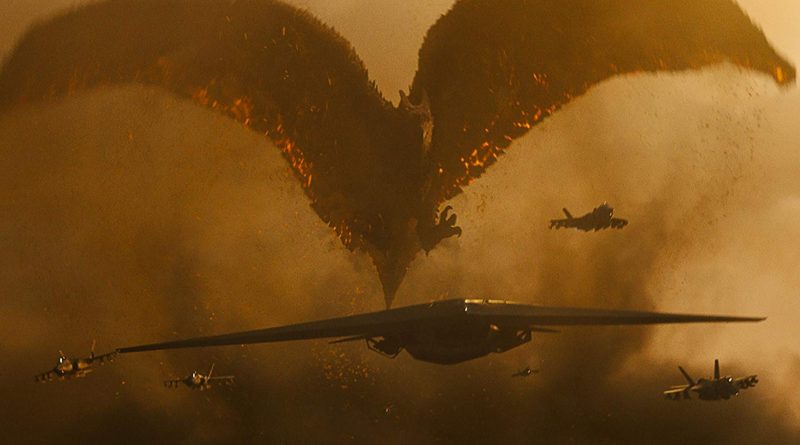 Clarification: this Godzilla bears little resemblance to the iconic sci-fi creature called “Gojira” that Ishiro Honda and his Japanese collaborators created in 1954 as a warning against nuclear proliferation after the horrific W.W.II bombings of Hiroshima and Nagasaki.

Now a CGI Godzilla and a number of other Titans emerge from the briny deep as a result of climate change. While we’re causing our own ecological extinction, these prehistoric creatures, hiding in remote spots around the world, might just the Earth’s only hope for restoring balance – whatever that means.

These sites are guarded by Monarch, a well-funded scientific organization. Testifying before a Congressional committee, crypto-zoologist Ishiro Serizawa (Ken Watanabe) insists that these creatures have existed on Earth longer than humans and they are, perhaps, the rightful rulers of the planet.

His view is supported by scientist Emma Russell (Vera Farmiga), whose husband Mark (Kyle Chandler) became an alcoholic after their son was killed during Godzilla’s San Francisco rampage. Retaining custody of their daughter Madison (Millie Bobby Brown), Emma has built the Orca, a sonic device that can lure Titans by imitating their audible calls.

As soon as it effectively awakens larval Queen Mothra from her cocoon, the machine is stolen by sneering eco-terrorists led by Jonah Alan (Charles Dance), who kidnaps Emma and Maddy. Coming to his senses, leaving a Colorado wolf preserve, Mark is now even more determined to kill Godzilla, et al.

Relentless chaos reigns as Godzilla proves he’s a friend to mankind, ultimately battling King Ghidora, a ferocious three-headed dragon, part of an invasive species from beyond our galaxy.

Unfortunately, the human story, written by director Michael Dougherty and his Krampus collaborator Zach Shields, gets short-shrift here in favor of special effects.

On the Granger Movie Gauge of 1 to 10, Godzilla: King of the Monsters stomps in with a fiery, fearsome 4 – MonsterVerse franchise fodder, heading toward Godzilla’s confrontation with Skull Island’s giant gorilla King Kong.