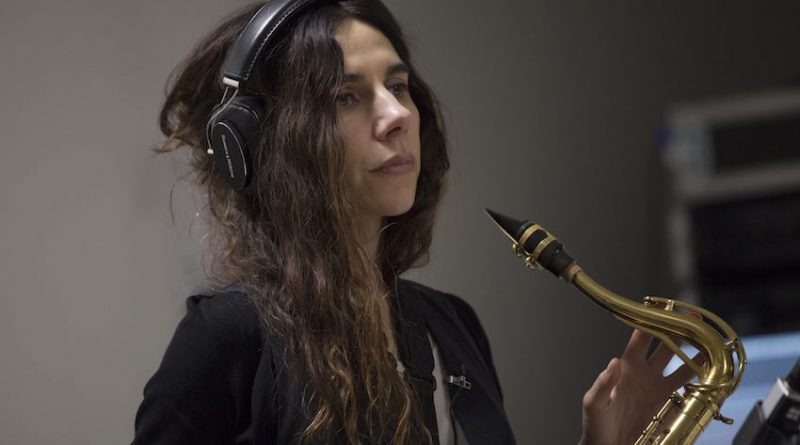 Weaving together a range of different threads and textures in his revealing documentary about cult British rock icon PJ Harvey and her 2016 album The Hope Six Demolition Project, Irish filmmaker and photojournalist Seamus Murphy‘s A Dog Called Money crosses the globe with the musician to meet the people and places that inspired her. It culminates in an extraordinary performance installation at London’s Somerset House where a custom-built recording studio with one-way mirrors was built, allowing a visiting public to come and watch Harvey record the final album with her band.

Kicking off her career in the late 80s and finding international stardom in the early 90s with hit songs like “Sheela Na Gig”, “50 Foot Queenie” and “Rid of Me”, Harvey’s powerful vocal style, edgy lyrics and driving guitar made her one of the most beloved and influential women in the 1990s indie rock scene. With a career that has withstood the test of time, Harvey as an artist has grown and developed with age; the songs that we see written, composed and recorded in A Dog Called Money reveal an often intimate creative process, illustrating how Harvey’s engagement with the world – in all its richness and diversity – is given voice through her music.

In between the bread-and-butter ‘making of’ sequences in the Somerset House recording installation, Murphy intercuts this with the far more interesting footage of Harvey and her encounters as she travels to locations as varied as Washington DC, Afghanistan, and Kosovo. Writing furiously in her notebook, we largely hear these fragments of inspiration through Harvey’s voiceover, curiously detached from the figure we see wandering through villages and cities on screen. The alchemy that magically converts these encounters into poetry and then into song lyrics – shaped by the tonal sculptures of her music itself – is never the subject of a clinical autopsy in the film. Rather, there is instead a more kinetic, indefinable energy that moves this process is the primary source of the film’s fascination and where it finds the core with Harvey’s practice.

While undeniably a film about process, the nuts-and-bolts content of the film is never as dry as such a conceit might imply. In their collaboration Harvey and Murphy seem to share a sense of wonder at how experience can become inspiration and then become art. Harvey’s engagement within the world through which she travels is then in turn passed on through the Somerset House live recording experiment firstly to those who visit the site, and then later to those who hear the album. This itself reveals a lovely sense of the communicative power of art being far more enduring and complex than a simplistic signal/receiver binary model.

Like most music documentaries perhaps, despite the scale of its vision it is difficult to not see A Dog Called Money as preaching to the converted on some level; the film is unlikely to appeal to anyone who hasn’t already made a connection with Harvey and her work previously. While some critics have grumbled about the film’s seemingly deliberate lack of structure, in its defense this seems entirely in keeping with the film’s focus on Harvey’s actual process: it’s not necessary linear or logical, inspiration exploding from unexpected encounters and then evolving into songs that at times seem to surprise even Harvey herself with the ‘shape’ of the end product.

Perhaps more of an issue is how the assumed beatification of Harvey is given to raise the project almost automatically above questions of cultural appropriation. Clearly engaging with and taking from the different cultures and subcultures she encounters; this would have been an avenue I would have loved to have had a deeper insight into regarding Harvey’s own thoughts on the lines between organic cultural flows and more overt cut-and-pasting. All artists are inspired, and it’s a fascinating and ideologically important question to explore how inspiration can be reimagined into something new, and not merely borrowed, stripped of its cultural odor and sense of origin in the worst-case scenarios.

But at its best, Murphy’s background as a photojournalist is visible in almost every shot, the footage of Harvey and her band recording shot the same eye for defamiliarization as that which marks their global travels together. Curiously, the strengths and weaknesses of A Dog Called Money may simply boil down to the same thing; while the dynamics of its poetic reverie is entirely the point as it seeks to explore Harvey’s creative process, its unable at times to maintain the pure momentum to fill the temporal expanse of its run-time. While the film succeeds in nailing precisely how time and space feed into Harvey’s astonishing creative output, as a feature-length documentary A Dog Called Money is less successful in holding our attention.