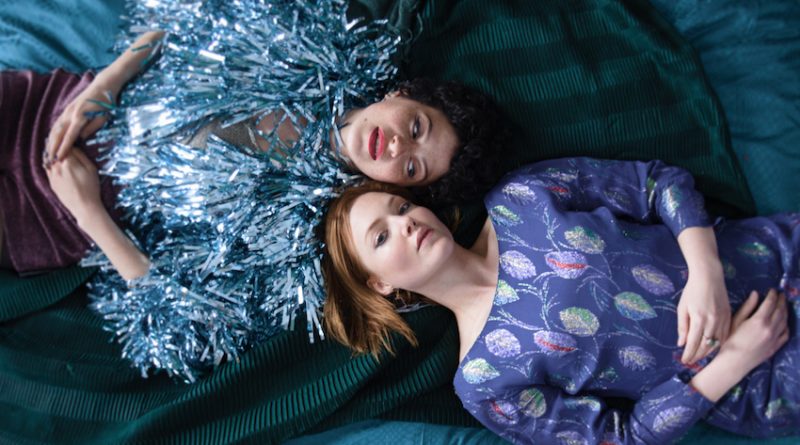 Bursting into the national consciousness with her smash 2013 debut feature 52 Tuesdays, Australian filmmaker Sophie Hyde has gone decidedly international in her vision with her much-anticipated sophomore effort, the international co-production Animals. Starring Holliday Grainger and Alia Shawkat, the two women play best friends and flatmates Laura and Tyler whose down-and-dirty carefree bacchanalia of their twenties suddenly begins to fade when faced with expectations of transitioning to the world of so-called ‘adult’ responsibility. Each woman responds to this in different ways, influencing not only their own identity and sense of value, but their relationship with each other.

The punk-rock feminism that marks their lifestyle comes thundering in with little subtlety from the outset as Peaches’ “Boys Wanna Be Her” from her 2006 album Impeach My Bush is unleashed over the film’s opening credits. Laura and Tyler’s world is one of sequin dresses, hangovers, spontaneity and sleeping in, and screenwriter Emma Jane Unsworth’s crackling, witty dialogue does solid work in swiftly revealing both the fiercely independent spirit and sharp intellect of the two friends (“The way I see it”, Tyler says when she finds Laura tied to her bed with her pantyhose one morning, “girls are tied to their bed for two reasons: sex or exorcisms”.)

But what at the outset shows all the signs of a polished 90s bad-girl postfeminist pastiche takes a sudden turn when Laura meets Jim (Fra Fee), the apparent love of her life to whom she soon becomes engaged. Conversations between Laura and Tyler suddenly begin to drift away from “where are we going tonight” and “what are we going to wear” towards broader ideological questions addressing their agency as young women, of their friendship, and what defines opting in and selling out.

Focusing primarily on Laura’s experience, the frustrated writer starts focusing more on her career and examining just what her work really means to her. While Jim seems to help her take herself more seriously as an emerging writer, this focus also leads her to cross paths with fellow scribe Marty (Dermot Murphy). In the face of an undeniable and near-immediate mutual attraction, Laura’s life is further complicated.

Animals is driven by strong performances – particularly of its two women leads – helped enormously by Hyde and Unsworth’s non-patronizing approach to their later-in-life coming-of-age crises, brought vividly to life through a sparkling, energetic screenplay and simply dazzling mise en scene.

At the core of the film lies the ‘animals’ of the title, and the film puts in the hard yards to convert what we might mistakenly interpret as a simplistic, obvious metaphor for the ‘wildness’ of these supposedly ‘untamed’ young women (the good old ‘party animal’ cliché) into something far more conceptually denser. In a casual conversation with Marty, for example, he asks Laura what animals “primary need[s]” are. Without thinking, she answers quickly “food, sex”, but he offers an alternate reading with his response; “safety”. This is closer to the looming need that dominates Laura herself at this stage in her life, and to emphasize the point the film is marked by frequent shots of a whole range of different animals – spiders and foxes representing a dangerous wildness as much as Tyler’s domesticated house cat presents a very different vision of what this eponymous ‘animality’ might mean.

Ultimately, the film seeks not to lock down but to open up a multiplicity of possible meanings of its title, and by doing so liberates the young women themselves from a binary thinking between opting out of the social expectations placed on women or surrendering to the patriarchy. There are different animals with different needs, who find different ways of not just surviving, but evolving. A film about presence, identity and change, Animals is a victorious celebration of life’s often unexpected complications.