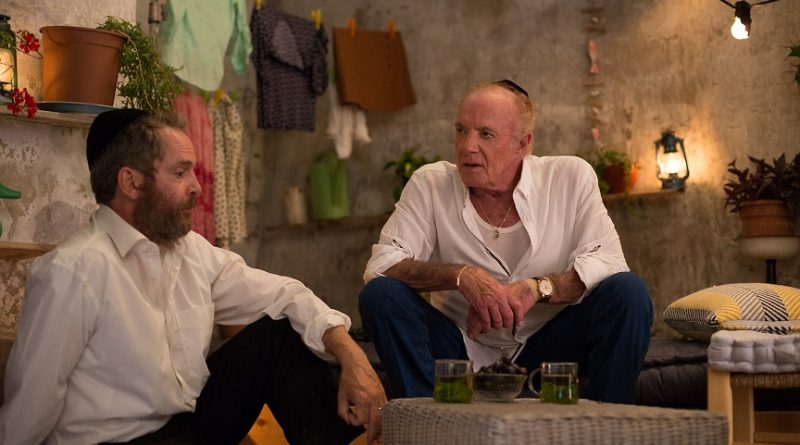 French novelist-turned-director Amanda Sthers, whose credits include You’ll Miss Me (2009) and Madame (2017), adapted her novel, the family drama Holy Lands, with its characters changed from French to American. With its themes about patriarchal abandonment, loss, regret, resentment and miscommunication, the movie is all over the place, with tones that shift from melodrama to black comedy. But the performances from a veteran cast led by James Caan make it worthwhile.

Caan plays an irascible, former New York cardiologist, Harry Rosenmerck, who has left it all behind in his twilight years to raise pigs in Nazareth and sell their bacon to restaurants in Tel Aviv. He’s Jewish, but defiantly agnostic, so his reasons for moving to Israel aren’t clear, except that his family has spent time there and his mother is buried in a seaside grave. Mostly, Harry seems to enjoy provoking the local Orthodox Jews, particularly a rabbi, Moshe Cattan (an excellent Tom Hollander). Harry is an equal opportunity offender, though. A peculiar Christian priest wants his land, claiming it is where Jesus Christ was born. The most congenial neighbor is busybody Mrs. Lapierre who likes Harry, but he can’t be bothered. Too bad, because Israeli actress Dina Doron lights up the movie in her brief scenes.

Meanwhile, back home, Harry’s younger ex-wife Monica (Rosanna Arquette), is dealing with a major health crisis. His playwright son, David (Johnathan Rhys Meyers) who is gay, much to the chagrin of his father, has mounted a new, autobiographical production and also eager to have a child with his partner. Daughter Annabelle (Israeli actress Efrat Dor), a photographer, is also in flux. Broke and floundering, she flies to Israel but it seems she wants a casual hook-up more than she wants to see the old man.

All these characters in crisis are too much for one movie. It may be that Sthers is too close to her own material — much of the dialogue and the voiceover reading of letters sounds more literary than cinematic. But the able cast manages a few laughs and some genuine moments, partially once Harry and Moshe begin to bond. Caan and Hollander make a likable odd couple and make us root for their unlikely friendship.