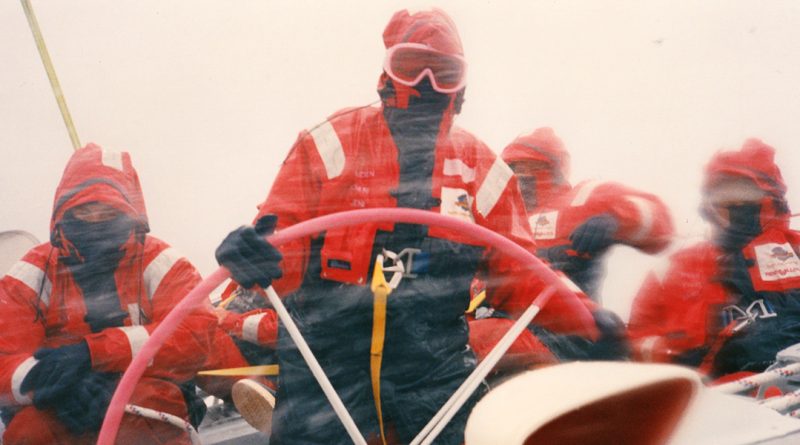 The timing could not be more perfect for the exhilarating, inspirational Maiden, director Alex Holmes’s documentary about the first ever all-female crew, led by a novice British skipper, that competed in the 1989 Whitbread Round the World Race (in 2005 it became the Volvo Ocean Race).

I’m not sure how well-known this story is outside England, or outside sailing circles, but seeing it unfold onscreen, with a captivating cast of real-life characters and stunning archival footage of the grueling race, one is thankful that it’s been so memorably revisited and brought to general attention.

Then and now, the heart of Maiden is Tracy Edwards. She recounts how, after her father died, she was a troubled teenager, ran away and found a makeshift family working on boats at a seaside resort. She wanted to sail, but no one would take a girl as part of their crew.

Edwards took a job as a cook on a boat for the 1985 Whitbread. Determined to sail in the race, Edwards, at 24 years old and against all odds, put together a multinational crew of young women to compete in the legendary race. Edwards borrowed the money to buy a second-hand boat, the Maiden, which she and her crew refurbished themselves in time for the 1989 race and, after everyone else turned them down, found a sponsor in King Hussein of Jordan, whom Edwards had befriended when he sailed on a boat for which she once worked.

In interview after interview, male skippers and crew members treated the women as a joke and doubted they would even finish the first leg of the race.

Holmes, best known for his 2014 documentary Stop at Nothing: The Lance Armstrong Story, delivers a nail biter once the Maiden sets sail. The story is bolstered by interviews with Edwards and all the original Maiden crew members who recall with color and emotion the highs and lows of the 33,000-mile journey. The footage, much of it shot by the crew, is stunning. As we see the Maiden sailing in the punishing Southern Ocean, near Antarctica, the women recount how ice froze on their faces and how they had to be strapped to the deck during watches, because the brutal winds might blow them into the choppy sea.

Even when the Maiden won a leg, the press treatment of the crew was condescending at best, treating their accomplishment as a fluke. Even at the time, the women expressed frustration that they were never asked about their tactics or grit or perseverance in the race. Questions were always about whether they were wearing makeup, whether they had boyfriends, or how they were getting along with one another.

There were tensions, particularly as the race wore on and Edwards, who stayed awake many nights navigating the course, battled her own doubts and demons to hold onto her conviction that she and her crew could win the race. For viewers who don’t know how it all ends, suffice to say that it may not be what you expect but it still packs an emotional wallop.

As with all superb documentaries, particularly those focused on extreme achievements, Maiden stretches beyond its timely and relevant subject matter. One does not have to be a sailing buff, or even a sports fan, to appreciate this Rocky-esque tale. Maiden beautifully captures a time and an experience, but it transcends it. It conveys universal truths about what it means to test oneself against the odds and to discover the true meaning of winning.