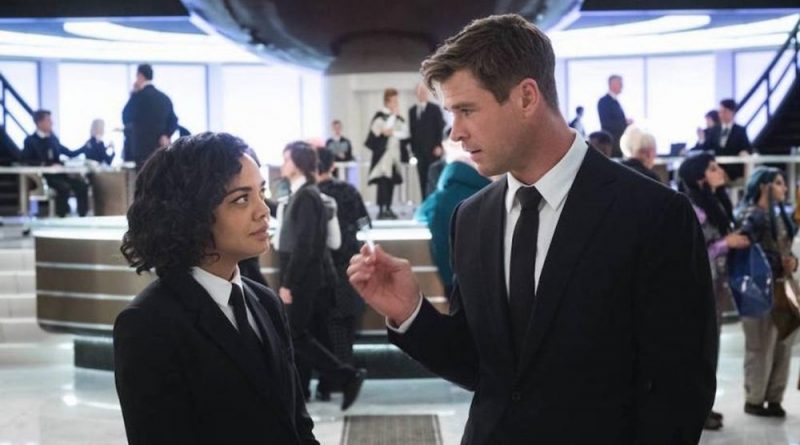 Years ago, Will Smith used to brag that he (via his movies) “owned” the Fourth of July. No more! Without charismatic Will Smith and Tommy Lee Jones, this reboot is like a firecracker that barely fizzles.

The stand-alone story revolves around Molly (Tessa Thompson), a young Brooklyn woman whose love for Stephen Hawking’s A Brief History of Time and childhood memories of her parents being neuralyzed by MIB after seeing an alien has given her insight into what’s invisible to most Earthlings.

Which is why Molly was so determined to discover the truth about mankind’s place in the universe that she tracked down Executive Agent O (Emma Thompson) to become the highly secretive agency’s first volunteer.

As a probationary recruit, known as Agent M, Molly is partnered with glibly cocky Agent H (Chris Hemsworth) who relies all-to-often on his looks and charm. Apparently, many years ago he saved the world with London division boss High T (Liam Neeson) “with nothing but wits and series-70 atomizers.”

Among those menacing them are Riza (Rebecca Ferguson), a criminal overlord, and break-dancing, shape-shifting Alien Twins (Laurent and Larry Bourgeois), exuding an eerie cosmic countenance; they can manipulate whatever they touch in their search for a crystalline box…a.k.a. intergalactic super-weapon.

While the gung-ho rookie/seasoned veteran setup is familiar, it’s lost its luster. Traveling to London, Paris, and Marrakech, it goes nowhere.

In past versions, the imaginative creatures from outer-space were created by visual effects master Rick Baker; now they’re obviously computer-generated images. The only memorable one is diminutive Pawny, voiced by Kumail Nanjaini.

On the Granger Movie Gauge of 1 to 10, Men in Black: International misfires with a frantic 4 – floundering pop culture sci-fi.