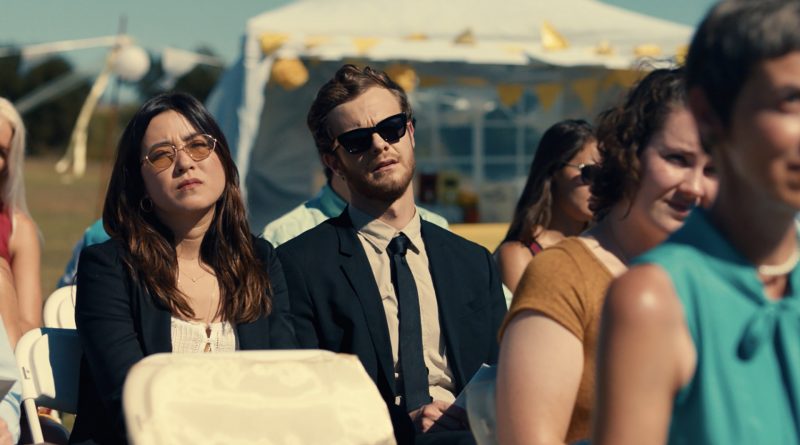 To most 20-somethings, the forced gaiety of weddings is an inevitable agony: the emotion-clogged best-man/bridesmaid’s toasts, traditional ceremony and booze-drenched reception – including being seated at the lonely ‘singles table.’

So long-time college pals Alice (Maya Erskine) and Ben (Jack Quaid), who reunite at the wedding of their friends Matt (Beck Bennett) and Amanda (Jessy Hodges), decide to be each other’s ‘Plus One’ for Southern California’s 10-weekend, marathon wedding season, including a destination one in Hawaii.

Asian-American Maya Erskine (Hulu’s “Pen15”) plays quick-witted, foul-mouthed Alice, who is still deeply hurt after being dumped by philandering Nate (Tim Chou), while Jack Quaid plays commitment-phobic Ben, whose psychological trauma after his parents’ divorce has made him steadfastly determined not to settle for anyone but the ‘perfect’ woman. BTW: if Jack Quaid looks familiar, he’s the son of Meg Ryan and Dennis Quaid.

Along with their amusing bantering, it’s fun to spy Ed Begley Jr as Ben’s freewheeling dad, preparing for his third nuptial attempt, and Rosalind Chao as Alice’s highly opinionated mother when her younger sister gets married.

“We wrote this during a time when all of our friends seemingly got engaged at the same time,” Jeff Chan revealed at the 2019 Tribeca Film Festival. “There was a typhoon of engagement announcements and wedding invitations, and we were like, ‘What the hell is going on? Are we being left behind? Do we need to get married, too?’ That was the kickoff point.”

On the Granger Movie Gauge of 1 to 10, “Plus One” is a snappy, yet engagingly sweet 6, celebrating the return of the rom-com.