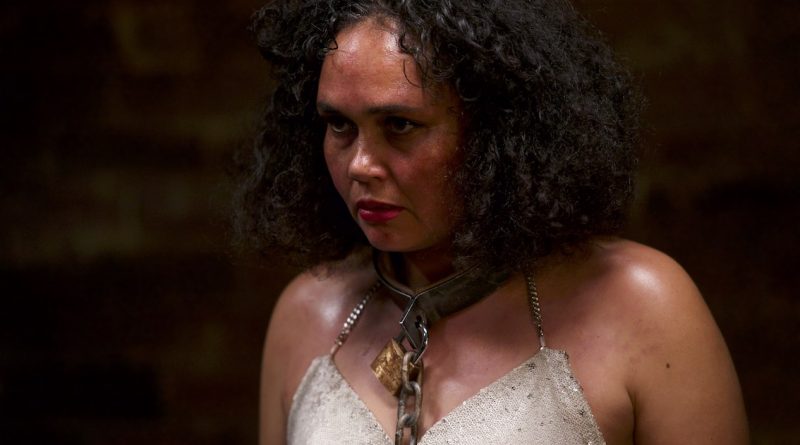 For all its famous spooky cinema exports – gore films about killer hitchhikers, ethereal gothic tales about missing Victorian schoolgirls – white Australian filmmakers at least have a somewhat clumsy history when it comes to the very real horror story of the nation’s colonial past and the ongoing abuses of its Indigenous peoples.

Beyond the somewhat fraught representations of indigeneity as somehow synonymous with the broadly ‘exotic’ or ‘mystical’ in films like Peter Weir’s 1977 classic The Last Wave or more lowbrow fare like Mario Andreacchio’s The Dreaming, it’s perhaps worth noting that the latter (along with James Bogle’s Kadaicha or Stones of Death) were both released in 1988, a year marked by highly publicized celebrations of the 200 year anniversary of the country’s invasion by British colonialists.

These films might be less than perfect, but that they were released during the bicentenary is significant; white Australian horror filmmakers might not get it right all the time when it comes to the nation’s ugly past, but it would be wrong to say that all of them didn’t see a parallel between White Australian history and the horror and violence synonymous with colonial rule. While the mainstream media gleefully bubbled away with government-sanctioned “Celebration of a Nation!” jingles, not all white Australian filmmakers (and not all white Australians) were ready to buy into the myth of terra nullius.

Five years later, however, and something magical happened; Tracey Moffatt’s Bedevil. Moffatt is one of Australia’s most accomplished contemporary visual artists whose work has made an impact around the globe. While today working primarily in photography and video art, her early work in filmmaking produced what remains even today some of the most compelling, thoughtful, beautiful and at times bitterly funny movies made in the country in the late 20th century. Her most famous film is arguably the 1990 short Night Cries, which brings a Sirkian sensibility to an Indigenous Australian story told in an abstracted, wildly coloured fantasy ‘outback’. Less well known but just as engaging are her short ethnographic mockumentary Nice Coloured Girls (1987), and her genuinely hilarious Heaven (1997) where she spies on white hardbody surfers at an Australian beach, heckling them from behind her camera, turning the dominant male gaze on its ear.

Bedevil remains today Moffatt’s only feature film, and to emphasize its significance, in 1993 it played at the Cannes Film Festival (a bumper year for Australian women’s filmmaking, with Laurie McInnes’s underrated masterpiece Broken Highway also playing, and of course New Zealand born, Sydney based Jane Campion becoming the only woman even still to win the Palme d’Or with The Piano).

If not the first then certainly one of the first horror anthologies directed by a single woman filmmaker, Bedevil tells three different ghost stories, all based on tales the artist was told growing up by her relatives of both Indigenous and European heritage. In 2013, Warwick Thornton – who few would argue today is one of Australia’s most important filmmakers with movies like Samson and Delilah and Sweet Country under his belt – would also experiment with the horror anthology format in The Darkside, which like Bedevil also reimagines a series of Indigenous ghost stories claimed to be based on true events.

These films are in part ancestors to the new Australian horror anthology Dark Place, directed by five Indigenous Australian filmmakers that premiered at the 2019 Sydney Film Festival. But there is a wider heritage here; while questions of race, power and identity certainly dominate the film, they are simultaneously marked by a spirit of playfulness or experimentation (be it with form or generic codes and conventions themselves) that echo the recently rebooted Tales from the Hood anthology franchise from the United States. From Japan’s Kwaidan in 1965, Italy’s Black Sabbath from 1963 and the horror-portmanteau film loving Brits with films like Dead of Night from 1945, horror anthologies area distinctly international affair, with a long history of providing a space for folklore, mythology and contemporary themes to manifest through the genre’s defining sensorial theme park ride.

It is in this spirit that Dark Place kicks off with Bjorn Stewart’s gruesomely hilarious splatstick wonderland, Killer Native. With its isolated, colonial bushland setting and focus on a white woman from the United Kingdom and the spaces she finds in common with a poorly treated Indigenous man, it’s hard not to retrospectively read Killer Native as a bookend of sorts to Jennifer Kent’s The Nightingale. Yet while Kent has gone for a vicious, extremely sombre revenge tale, Stewart is aggressively more playful as he revels in scenes of graphic disembowelment, more Troma than Kent’s vision of trauma. Appearing in a small role in Craig Anderson’s offensively hilarious horror-comedy Red Christmas in 2016, Stewart shares a similar fascination with how to balance politics with horror’s more deliciously funny gory delights; so much so that there’s a case to be made perhaps that despite the fact Killer Native is deliberately much more lowbrow than The Nightingale, it might have as much – if not even more – to say about identity, place, monstrosity and empathy than Kent’s more internationally recognized counterpart. Both Stewart and Kent know how genre works on a mechanical level, albeit with a focus on different audience responses; but what they share is a determination to make an impact through the unforgettable display of bodies in crisis.

Like most horror anthologies, Dark Place moves through a number of tonal shifts, switching from the Stewart’s gleeful gorefest to Liam Phillip’s suffocating Foe. Leonie Whyman carries this story almost single-handedly in her performance as Elena, a young woman suffering from sleep problems. Following the advice of her doctor, she uses a video camera to record her nocturnal activities, hoping to reveal what it is that is disrupting her sleep. In her small apartment covered in photographs and paintings, Elena is clearly a person for whom the visual holds great power; as she watches back the video footage she has recorded of herself, she is deeply shaken to watch as she gets out of bed to get a knife, later hiding it under the bed clothes covered in blood. Terrified, she padlocks her door and becomes increasingly anxious as the plot twist – a timeless gothic classic – is revealed. Yet more than just its spooky impact, Foe also echoes in parts some of the concerns of Jordan Peele’s Get Out, albeit in a notably different cultural context; it shares with Peele’s feature ideas of being trapped within a kind of representational framework that hinges around the way that she sees herself represented in her own videos. Elena sees herself how others see her, and the result – like Get Out – is a space where horror flourishes.

Rob Braslin’s Vale Light is another woman-centred story, this time focusing on young single mother Shae (Tasia Zalar) and her daughter Isabelle (Jolie Everett), who have been forced to move house after a mysterious fire at their last rental house sees them move next door to the superbly creepy Diane (Sara Pensalfini). Immediately suspicious of Diane’s toothpaste ad smile and overwhelming friendliness, Shae’s instincts are soon validated as Diane’s true nature is revealed. A shrewd, effective short film that deliberately turns the blanket ‘mysticism’ white filmmakers so often apply to Indigenous Australian characters back on itself, Vale Light renders the world-travelling, souvenir-collecting white Baby Boomer as something truly terrifying, demanding a surrendering to a special kind of power to resist it that brings its own challenges.

It is perhaps the nature of the beast with horror anthologies that they tend to be uneven, and if there is one film in Dark Place that doesn’t ‘fit’ in the same way as the others, it is Perun Bonser’s The Shore (curious if only that Bonser seems to be the most experienced filmmaker amongst the group). This is not to say that it is not an accomplishment on its own merits; a deeply poetic short about a young woman called Selena (a great performance by Luka May Glynn-Cole) who is drawn to a mysterious figure in the water near where she is living, to be fair Bonser is clearly more interested in mood and tone than narrative. On this front, The Shore is on its own merits a success; shot in beautiful black and white photography, it is a dark, brooding tone-piece that seeks to primarily communicate a sensibility. While admirable on its own merits, it does admittedly seem like a bit too much of a dramatic tonal shift when positioned next to the films surrounding it.

Yet while The Shore is happy to go in its own direction, Dark Place saves the best till last and excels with Kodie Bedford’s unforgettable, electrifying Scout. If every horror anthology contains one short you wish was a feature, this is it; despite being a newcomer to directing, Bedford directs action like an old-hand, and the way she combines familiar genre thrills with inescapable and at times explicit political agenda about the exploitation and abuse of Indigenous Australian women by white men is nothing less than masterful. Imprisoned in shipping containers, three women are held captive at the mercy of brutal men in a sex trafficking operation that sees them frequently tortured and drugged. The complex relationships between these women largely form the core of what fascinates Bedford, and it is through her title character (Katherine Beckett) that the internal schisms between the women are unpacked to reveal the depth of their trauma, revealing the broader institutional biases that work against them as Indigenous Australian women are inseparable from the situation they find themselves in. Scout is also, however, a thoroughly satisfying revenge tale.

Scout typifies what it is that largely makes Dark Place so special; the directors of this anthology understand the power of horror to address real issues in a contemporary Australia haunted by an ugly and at times terrifying colonial past. But these are stories we can experience in a range of ways – from comedy to gore to revenge tales – and the power of Dark Place is how intuitively it employs the pleasures of horror to pack a lasting punch.