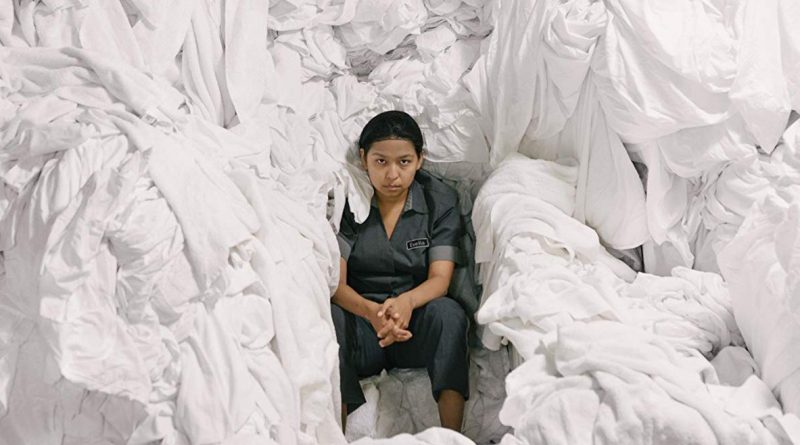 High above Mexico City, more than 20 floors above the ground, Eve (Gabriela Cartol) works with her whole body. She dashes across hotel rooms, leaning over to pick up trash. She perches in the bathroom, scrubbing away. She smooths sheets and blankets with her entire upper half, making a 90-degree angle with the bed. Her responsibilities are highly regimented and take an immense physical toll, but you wouldn’t know that from her polite small talk or her demure “Excuse me” when she leaves a room. Eve has been trained to serve and to be ignored.

The hotel where Eve works—and where director Lila Avilés stages most nearly all of The Chambermaid, venturing outside only for a few brief moments—is a high-end establishment where the employees, nearly all women, have created their own social universe. Certain groups of friends always eat lunch together. Others meet for a GED training class. A few women have side hustles, pushily trying to sell their coworkers lotions, plastic food containers, toys, and other trinkets for extra cash. All a bustling ecosystem, but one which Eve avoids. She barely eats, often only grabbing a bag of popcorn. She doesn’t gossip. The only time she comes alive is when she sneaks away to call back home, 2 hours away, where her 4-year-old son is being cared for by another woman. While she works endlessly to provide for him, she barely sees him.

But all of that would occur in a fair or just world, and Avilés makes it clear that reality doesn’t work like that. Avilés often shoots scenes by placing the camera in one location and not moving it, forcing us to instead view how thoroughly Eve exerts herself. In the film’s opening scene, she darts around an exploded-looking hotel room, throwing trash in a bag, unclogging a toilet, and tidying up, when she realizes the room’s occupant is passed out on the floor. She tries to offer help, but he ignores her. He won’t make eye contact or speak with her. He gestures at her to leave. And instead of following Eve as she quietly exits, the camera stays in the same location, watching the man’s disinterested face. He is almost disgusted by her presence, by the idea that he interact with someone lesser-than, and that same condescension runs through experiences with other hotel guests, from a man who hordes the free amenities and asks for extra lotion and small bath towels to a woman who asks Eve to watch her son so she can shower. All of these people asking for Eve to bend the rules just for them, with no consideration of her humanity in the process.

The Chambermaid reinforces again and again how isolating this environment is for Eve, and Cartol communicates that with her own performance, which is closed-off for so long that the film’s final moments don’t land with quite the intended impact. Eve speaks so infrequently to other characters and communicates her own desires so haltingly that the distance she feels from others we feel as viewers, too. Still, certain moments are immensely powerful. Her look of unperturbed calm as she settles down with her first book, contrasted with her fear and mania when she unexpectedly stains hotel linins with her blood, demonstrate what Eve personally values versus the exceptionally high standard that she must maintain. Those glimmers of who Eve is outside of work help clarify the way she acts as an employee, but because The Chambermaid only takes place within that hotel environment, there’s a limitation to how much of this character we truly understand.

Still, The Chambermaid makes clear that what Eve wants is so recognizable that it’s almost ordinary: an education for herself, a better life for her son, a feeling that she has accomplished something. And how the film counters those ambitions makes for an alternately bleak and reverent viewing experience, leaving us with an understanding of what we really mean when we say “women’s work.”