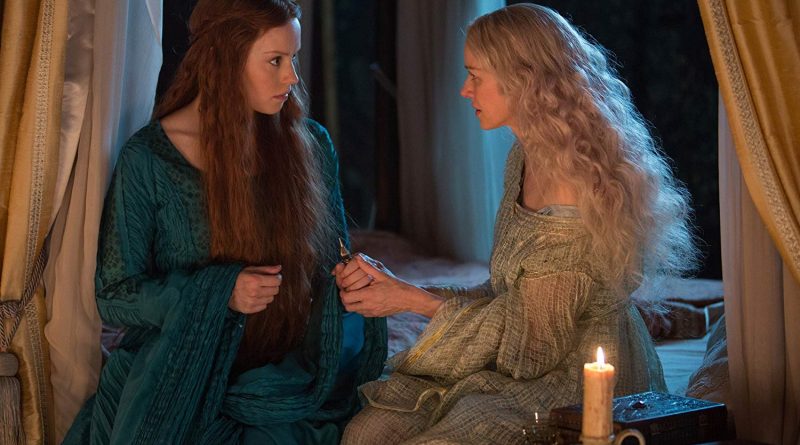 Reexamining classic texts from a different perspective, particularly minor or neglected characters, is an enticing idea fraught with possibility and peril. Tom Stoppard’s absurdist play,
Rosencrantz and Guildenstern are Dead looked past Hamlet to the bit players. But what about Shakespeare’s women? Kudos to director Claire McCarthy and to Semi Chellas who adapted Lisa Klein’s young adult novel, for having the imagination and guts to take one of Hamlet’s most under-explored characters, the tragic Ophelia, and put her center stage.

To brush up on your Shakespeare, Ophelia is Hamlet’s teenage love interest. The Danish prince (played by George MacKay) inadvertently kills her father, Polonius, and then flees Denmark for England. Ophelia famously goes mad, then throws herself into the river. That’s how Ophelia opens, with lovely Daisy Ridley floating in a stream among the flowers and the voice-over: “You may think you know my story. I have seen more of heaven and hell than most people dream of, but I was always a willful girl and followed my heart and spoke my mind. And it’s high time that I should tell you my story myself.”

It’s an intriguing start for what seems will be a female-empowerment angle to a famous man’s story. Ophelia shifts between fidelity to Shakespeare and reinvention, but the changes don’t have enough irreverence or substance to really subvert the play. The main plot is intact: Claudius (Clive Owen) kills his brother, the King (Nathaniel Parker), and marries Queen Gertrude (Naomi Watts). Young Hamlet swears revenge but suffers his existential indecision. There are new characters, including Gertrude’s twin sister (also played by Watts) who makes potions in the woods. Some of the play’s most famous lines are retooled or placed in different contexts which has the unintended consequence of diluting their potency. “Get thee to a nunnery” becomes not the cruel dismissal from Hamlet but a secret code to help Ophelia get away.

Watts is juicily over the top as Gertrude, delivering complexity and providing a twist on these famous tragic figures. Her scenes with Ophelia are the best in the movie. But the promise of an innovative retelling never quite gels. The film is handsome to look at in a lavish, overripe way but the melodrama begs for a bit more madness.