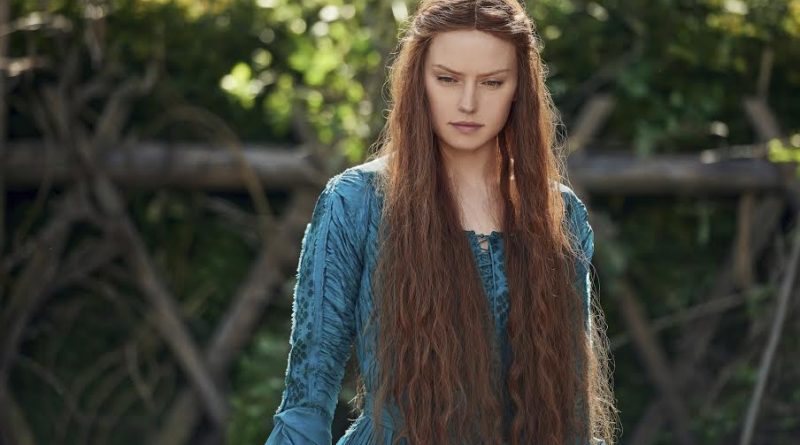 In William Shakespeare’s Hamlet, troubled Ophelia is driven mad when her father, Polonius, is murdered by her lover, the titular Danish prince. Supposedly, she falls into the river while picking flowers and sings as she slowly allows herself to drown.

Set in 14th century Elsinore, this Ophelia (Daisy Ridley…a.k.a. Star Wars Jedi) says to forget everything you thought you knew and watch as she relates her revisionist perspective on the tragedy, adapted from Lisa M. Klein’s YA novel by screenwriter Semi Chellas and Australian director Claire McCarthy.

“You may think you know my story,” Ophelia says, adding, “I was always a willful girl.”

Indeed, when she was only 10, motherless Ophelia sneaked into a royal banquet where, after overhearing a conversation about Eve’s Biblical temptation, she piped up, “I think the apple was quite innocent in the matter”…to the dismay of her social-climbing father Polonius.

Unlike other young women of that era, headstrong Ophelia has learned how to read, a skill that appeals to Queen Gertrude (Naomi Watts), who requests that Ophelia read bawdy medieval erotica aloud to her before retiring to bed.

That, added to Ophelia’s familiarity with particular herbs, elevates her quickly to favored lady-in-waiting status, making trip-after-trip into the woods to visit the hermit’s hovel that belongs to the witch Mechtild (also Naomi Watts) to obtain elixirs and potions for the “fickle, frail” Queen.

Meanwhile, when Hamlet’s father dies, Prince Hamlet (George MacKay) returns to the palace, expecting to take rightful place on the throne. But his ambitious Uncle Claudius (Clive Owen) has other ideas, romantically pursuing Queen Gertrude, his sister-in-law, which arouses rumors about the late monarch’s demise.

While the production design (elegant costumes, lush cinematography) is sumptuous, Steven Price’s loud, pretentious score drowns out much of the dialogue. So the novelty quickly wears off.

On the Granger Movie Gauge of 1 to 10, Ophelia is a slick, yet silly 6. It’s a feminist folly.