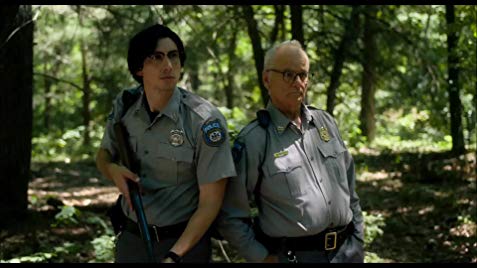 And, perhaps, if you’ve never seen a zombie apocalypse before, you might find this one amusing.

Even in a small town like Centerville (population 738), news of “polar fracking” is causing some consternation. Electronic devices aren’t functioning properly, pets are running away and the sun refuses to set. Could the Earth be thrown off its axis?

Which means the complaint lodged by cranky Farmer Frank Miller (Buscemi) – whose red baseball cap proclaims “Keep America White Again” – about a stolen chicken, implicating Hermit Bob (Waits), will soon be relegated to the back burner.

Then the corpses start coming. At first, it’s just a couple of hands clawing out of the earth near a gravestone. Then two ravenous ghouls (Sara Driver, Iggy Pop), muttering “Coffee,” chow down at the diner. Yearning for what they had in life, one (Carol Kane) chants “Chardonnay”; others utter “Wi-Fi,” “Siri” and “Xanax.”

Everyone seems totally clueless about how to handle the situation except Zelda (Swinton), the mysterious Scottish Samurai warrior mortician, who claims: “I am confident in my ability to defend myself against the undead.”

Instead of characters, Jarmusch relies on cameos: RZA of the Wu-Tang Clan driving a Wu-PS truck, Rosie Perez as a TV anchor named Posie Juarez.

There are many allusions to George Romero’s “Night of the Living Dead,” and a cemetery headstone reads “Samuel Fuller,” referencing director Sam Fuller with whom Jarmusch collaborated on Tigrero: A Film That Was Never Made (1994).

On the Granger Movie Gauge of 1 to 10, The Dead Don’t Die is a fatalistic 5, filled with deadpan dummies.