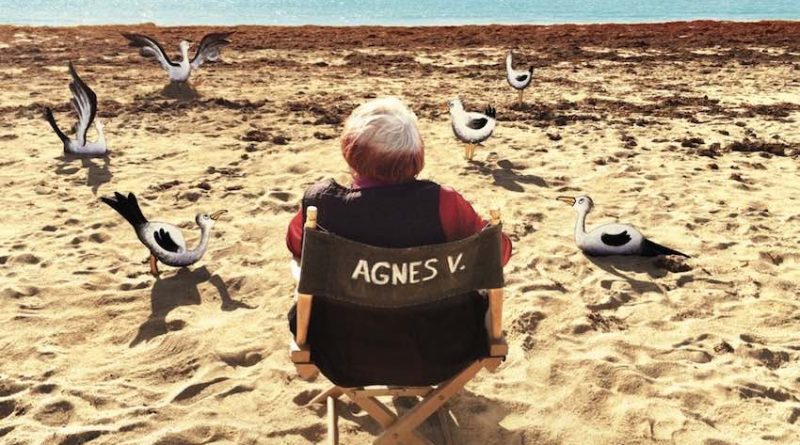 Despite making it to the impressive age of 89, that Agnès Varda is now past tense is still for so many admirers of her work a hard pill to swallow. Just as her films granted the fleeting moments she captured in her work a kind of immortality unique to both her own world view and aesthetic style, while we knew she couldn’t live forever, it still seems almost illogical that this beacon of kindness, intelligence and one of cinema’s most famous brand ambassadors is no more.

It is therefore impossible to frame the experience of watching her last film Varda by Agnès outside both this simultaneous sense of loss but also awe at the sheer scale and diversity of her output. Varda By Agnès cannot help but place us in an emotional state somewhere between grief and celebration, but perhaps more importantly it grants an essential space where the filmmaker and artist herself has the rare opportunity to frame her legacy from her own perspective: this is what was important to me, this was my journey, my story, one which I actively choose to share with you directly, even personally.

The film starts humbly enough as we see the famous “Agnès V” director chair, the director sitting on stage with her back towards the camera in an old ornate theatre. She speaks to her audience – us – about a range of subjects; her work, her inspirations, artistry and desire and kindness. This on-screen commentary structures her tour back through her work. It is more thematically than chronologically structured, moving intuitively between films less to form a linear narrative than a kind of sensorial or tonal collage. At times, she focuses on the technical aspects of her work – the coloured lighting gels cut into love heart shapes that feature in her 1967 short Uncle Yanco – while elsewhere, she speaks of more conceptual and autobiographical matters.

In the case of the former, her reflections on possibly her most famous film Cléo from 5 to 7 from 1962 focus on the temporal aspects of cinema. Varda speaks of the budgetary limits that forced her to rethink what she could do with such little money that would regardless make a real impact. Archival interview footage shows Varda talking of the difference between “subjective” and “objective” time that marks this particular film, about how time feels to what we scientifically know it to be.

Unsurprisingly for those familiar with Varda’s ouvere, the autobiographical aspects of the film find her discussing movies such as Daguerréotypes (1967) – a documentary about the Paris neighbourhood which she called home – and, later Jacquot de Nantes (1991) finds her unpacking the childhood memoirs of her husband Jacques Demy.

Throughout Varda By Agnès, she also weaves threads of her interest in politics and the impact it had on her through her reflections of films such as Black Panthers (1968) and One Sings, The Other Doesn’t (1976). This underscores that while her films are often marked by a trademark flair for color and movement, Varda was fearless when it came to tackling real world issues such as homelessness, reproductive rights, mortality, and poverty.

Often joined by collaborators such as Sandrine Bonnaire (the star of her 1985 film Vagabond), as Varda moves beyond the walls of the theatre that open the film she grows increasingly playful in terms of where her physical location as narrator will take us – joined by children and large cut-outs of cardboard birds on the beach, other highlights in Varda’s guided tour through her career include memorable stops at features and shorts including Le Bonheur (1965), Lions Love (1969), Murs Murs (1980), Diary of a Pregnant Woman (1958), La Pointe Courte (1955), The Beaches of Agnès (2008) and The Gleaners and I (2000) amongst others. Curiously, she makes a point of also including her critical ‘failures’; notable here are her memories of her star-studded One Hundred and One Nights with Robert De Niro, Catherine Deneuve, and cameos ranging from everyone from Alain Delon to Leonardo DiCaprio. She also revisits memories of her work with another celebrity collaborator, Jane Birkin, and their films Jane B. Par Agnès V. (1988) and Kung Fu Master (1988).

Moving to the present day, the film necessarily stops just before we reach the point we know it is inevitably taking us: Varda’s death. As she focuses on the later highlights of her career, she shifts her gaze towards her work as a photographer and artist, and balances this with reflections on aging itself.

Varda By Agnès is a sprawling, wandering film that reveals how the seemingly different strands of our lives can diverge, intersect, vanish and return. At the heart of this is simply the experience of having lived a full life, where she was influenced by the people she met and worked with as much as she influenced them. “Real people are the heart of my work”, she says simply at one point, noting elsewhere “nothing is trite if you film people with empathy and love”.